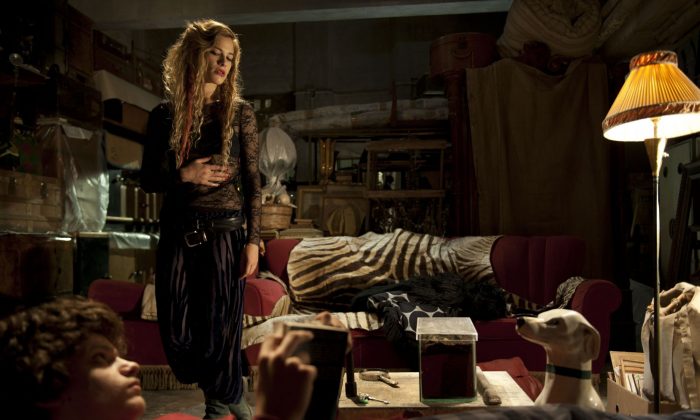 Tea Falco and Jacopo Olmo Antinori play half siblings who help work through each other’s troubles in “Me and You.” (Medusa Distribuzione)
Entertainment

Bertolucci’s ‘Me and You’ a Small Masterpiece

Kids can smell money better than anyone, so when they shun a well-heeled classmate, there must be something off about him. Lorenzo is one such social outcast. His therapist is clueless, but the audience immediately recognizes a host of family issues.

Perhaps it represents progress when his Oedipal issues evolve into an interest in his half-sister. It promises to be an awkward week for the lad in “Me and You,” the eagerly awaited new film from Bernardo Bertolucci.

Bertolucci never exactly spells it out, but we can deduce from early conversations that Lorenzo’s mother is his father’s trophy wife. The unseen old man only puts up with the surly kid to indulge his still-attractive mother.

As part of his divorce settlement, he shunted off Lorenzo’s half-sister Olivia, but this was probably no great loss, considering her behavioral problems.

Lorenzo is quite difficult as well, but his mother is practically giddy anticipating the week he will be away from home on a school-sponsored skiing trip. Just imagine Lorenzo being sociable—except he really won’t go.

Instead, Lorenzo plans to spend the week holed up in the basement of their apartment building, indulging in junk food and teen angst. However, his week of brooding is interrupted by Olivia’s intrusion into his makeshift lair. She also intends to crash for the week, in hopes of kicking her habit cold turkey.

Initially, they are rather standoffish toward each other, but they start to bond as Lorenzo nurses her through the worst of her detoxification. Can they maybe learn a few lessons from each other?

Granted, “Me and You” is a minor film compared to Bertolucci’s sweeping masterpieces, like “The Last Emperor” and “The Conformist,” but it is an earnest story, well served by the master’s restrained approach. It is rather subtle hinting at Lorenzo’s hang-ups, but it still compares quite easily with Bertolucci’s more overtly and provocatively sexual films, such as “La Luna,” “Stealing Beauty,” and “The Dreamers” (with “Last Tango in Paris” being in a class by itself).

Given his snide features and pimply complexion, it is doubtful that any teenage Italian girls have posters of lead actor Jacopo Olmo Antinori on their walls. Bertolucci’s gawky presentation of his character hardly does him any favors either, but Antinori is certainly credible as a petulant, antisocial boy.

For her part, Tea Falco vividly expresses the youthful world-weariness of a teen junkie. Their chemistry is appropriately ambiguous, but undeniably potent.

Frankly, it is just nice to have Bertolucci back in action. As much as we might like to have another huge canvas from him, we will settle for an artfully composed miniature like this. Recommended for connoisseurs of Italian cinema, “Me and You” opens this Friday, July 4, in New York at the Lincoln Plaza Cinema.