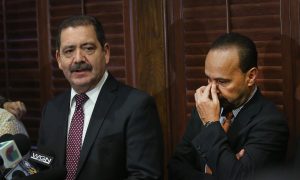 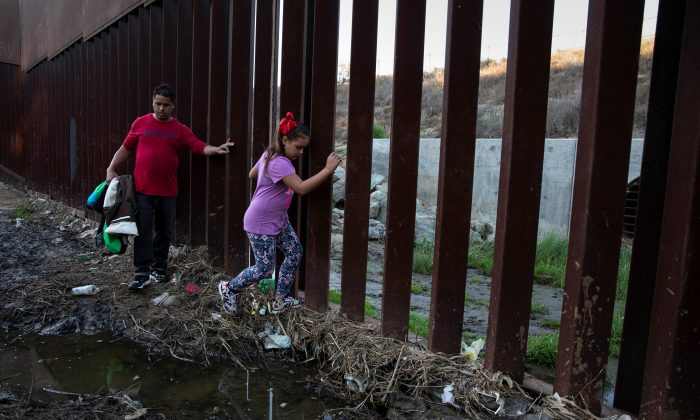 Tony Mauricio Arita, 33 and his daughter Andrea Nicole, 10, from Honduras, part of a caravan of thousands from Central America trying to reach the United States, move next to a border wall before crossing illegally from Mexico to the U.S, in Tijuana, Mexico, on Dec. 4, 2018. (Alkis Konstantinidis/Reuters)
Viewpoints

If the illegal immigration/amnesty movement can claim one father, it is undoubtedly a man whose name you likely don’t know: Bert Corona. The issue now dividing America like no other began as a tiny campaign, nurtured for decades by the late Corona, a Los Angeles labor leader and lifelong Marxist-Leninist.

Corona dedicated much of his life to turning illegal immigrants into a political movement. His work transformed California and is now rippling across the whole nation. If the United States ever falls to socialism after being deluged by illegal alien voters, Corona will go down in history as one of this country’s great communist revolutionary heroes.

Corona was born in 1918 in El Paso, Texas, at the height of the Mexican Revolution.

His father, Noé, was a member of the Partido Liberal Mexicano, an anarcho-syndicalist group, and served as a comandante in one of the two main insurgent armies of the Mexican Revolution, the Division del Norte. The elder Corona fled to the United States when the revolution was defeated.

In the late 1930s, Corona moved to Los Angeles to attend the University of Southern California on a basketball scholarship. Soon, he was drawn into labor organizing with the communist-controlled International Longshore and Warehouse Union (ILWU), and later, the equally Marxist-Leninist-dominated Congress of Industrial Organizations (CIO). Corona was a protégé of the legendary ILWU leader Harry Bridges, who was later identified as a secret leader of the Communist Party USA (CPUSA).

Probably because of his extensive work inside the Democratic Party, Corona was never open about his membership in the CPUSA. However, he was identified in more than one Congressional hearing as a CPUSA member, and worked with well-known CPUSA comrades for decades.

In the 1970s, Corona was co-chair, with open communist Angela Davis, of the CPUSA-controlled National Alliance Against Racist and Political Repression.

When the Berlin Wall fell, Corona defiantly stated, “The workers of East Germany, for example, aren’t about to give up easily many of the supports they had under socialism, such as low rents and free education for their children.”

Corona was one of the founders of the still-influential Mexican American Political Association, which has launched the careers of many Latino politicians within the Democratic Party. Corona also helped set up the Viva Kennedy clubs in the 1960s, which, for the first time, brought large numbers of Latinos into the Democratic Party.

Corona served as co-chair for both Lyndon Johnson’s and Bobby Kennedy’s presidential campaigns in California. At one point, he was a member of the Northern California Democratic Campaign Committee.

After delivering a nationally televised address at the 1968 Democratic Party convention in Chicago, Corona broke with then-too-conservative Democrats. He allied with the Raza Unida Party (RUP), which preached that an “occupied Chicano nation” in the southwestern United States needed to be wrested from the “Anglo” conquerors and returned to Mexico.

The recipients were asked to invite students of both sexes to enroll in the Patrice Lumumba University for the academic year beginning in September 1975.

This, the recipients were told, would benefit the “socialist system,” which “seeks to support the Chicano self-determination movement.”

Corona later worked very closely with Chavez. The two, however, clashed over one vital point. Chavez actively worked to deport illegal alien farm workers lest they compete with his own members. The more politically sophisticated (and communist-trained) Corona, instead, wanted to organize illegal workers into a political force.

“I did have an important difference with Cesar,” Corona wrote in his autobiography, a quoted by the Los Angeles Times. “This involved his, and the union’s position on the need to apprehend and deport undocumented Mexican immigrants who were being used as scabs by the growers. … The Hermandad believed that organizing undocumented farm workers was auxiliary to the union’s efforts to organize the fields. We supported an open immigration policy, as far as Mexico was concerned.”

After World War II, the Immigration and Naturalization Service (INS) stepped up its efforts to cancel the work visas of Mexicans living in the San Diego area. In 1951, union leaders Phil and Albert Usquiano organized La Hermandad Mexicana Nacional (The Mexican National Brotherhood) to oppose the program. In 1968, Corona brought the Hermandad to Los Angeles and began to spread it across the country. At one point, the group boasted 30,000 members.

Hermandad used left-wing lawyers and mass organizing to protect illegal aliens from the INS. The group organized housing for illegal alien families and tried to unionize illegal workers where possible. But, most importantly, it tried to use their numbers to gain political leverage and money—lots of money.

During the 1980s and 1990s, Hermandad received at least $35 million in grants. However, by 1997, Hermandad was $8 million in debt “including $4.2 million on its new Los Angeles health clinic,” according to California journalist Lloyd Billingsley.

“In 1995, Hermandad was evicted from its North Hollywood office and sued for $400,000 in back rent. … Corona told reporters that the group used employees’ withholding taxes to pay bills, a violation of state and federal law. These derelictions did not stop the California Department of Education (CDE), headed by Delaine Eastin, former Bay Area Democratic assemblywoman, from channeling nearly $10 million in adult education funds to Hermandad.”

Incidentally, Eastin stood unsuccessfully for California governor in 2018—with the endorsement of the largest Marxist organization in the United States: the Democratic Socialists of America (DSA).

Corona and Hermandad fought back. They prepared information packages for Mexican workers, teaching them how to legally defy or stall the INS. Hermandad regularly defended illegal aliens in court.

Corona and his team fought the proposed Rodino Bill, which made employers legally liable for employing illegal aliens. They also helped defeat a proposal that Mexican workers be required to carry ID cards while in the United States.

In 1986, Congress passed a sweeping amnesty bill, which allowed certain illegal aliens to apply for citizenship. While publicly criticizing the new law by claiming it did not go far enough (it required applicants to learn English, for example), Corona and his team quickly moved to exploit it.

Corona and Hermandad helped more than 160,000 Mexicans gain U.S. citizenship under the amnesty.

Corona died in 2001, but his legacy lives on through hundreds of radical leftist proteges and acolytes. Three of Corona’s disciples in particular—Antonio Villaraigosa, Maria Elena Durazo, and Gilbert Cedillo—are still very active in California politics.

“By his late teens, he [Antonio Villaraigosa] had anchored himself to the movement—and to the legendary Bert Corona, a radical organizer and proponent of immigrant rights who nonetheless functioned in mainstream politics,” according to DSA member and Los Angeles Times columnist Harold Meyerson.

“With Cedillo and Maria Elena Durazo (much later to become president of the L.A. local of the hotel and restaurant workers), Villaraigosa became a full-time organizer at Corona’s Centro de Action Social Autonoma, CASA for short.”

Villaraigosa would go on to become mayor of Los Angeles. Under his administration, immigration enforcement became almost non-existent. Hundreds of thousands of illegal aliens and their families moved into Los Angeles County and neighboring areas.

Durazo became head of the California AFL-CIO (American Federation of Labor and Congress of Industrial Organizations), where she organized massive union-staffed and funded Latino voter registration drives and get-out-the-vote efforts. Her work added hundreds of thousands of new Latino voters to the California rolls—the vast majority of them Democrats.

“The campaigns we developed broke new ground, organized new union workers, and increased the political impact Latino voters have had on California politics—simultaneously tripling their number of registered voters, increasing the Democratic share of that vote by 50 percent, and doubling the percentage of the total votes cast in California from Latinos.”

“Bert Corona was a child of the line in the sand between the U.S. and Mexico—the problems of the millions of people crossing the border dominated his life …

“Some might say LA hasn’t changed that much. But today the key to getting elected in LA is winning the votes of hundreds of thousands of working-class Latinos. And the undocumented workers he fought for have found their own voice—their strikes and organizing drives sweep through industry after industry, and some of LA’s unions have taken up their cause.

“If this is not the same world Bert Corona was born into, it is certainly one he helped create.”

Corona’s life’s work has borne tremendous fruit. Once a conservative state, California is now almost totally controlled by the left and the Democratic Party. This can be attributed largely to Corona and his many disciples. Fifty years of deliberately encouraging and fostering illegal immigration into California has turned the Golden State into a bastion of socialism.

Most U.S. presidential elections are won or lost by under 3 million votes. With an estimated 22 million Democratic-leaning illegal aliens currently living in the United States, it’s not hard to see where Corona’s ideas could take America.

Still wondering why the Democrats refuse to build that wall?