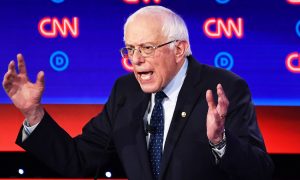 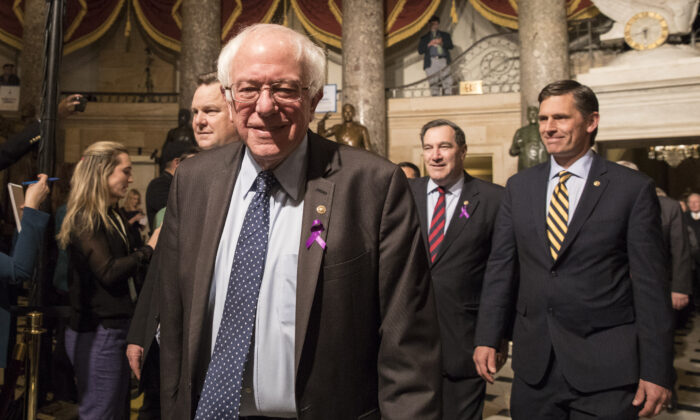 Sen. Bernie Sanders (I-Vt.) in the Statuary Hall of the Capitol building on the way to attending the State of the Union in Washington on Jan. 30, 2018. (Samira Bouaou/The Epoch Times)
2020 Election

Bernie Sanders to Join Next Debate After Medical Emergency

Sen. Bernie Sanders (I-Vt.) will be participating in the next Democratic presidential debate after being hospitalized for a blocked artery in his heart, according to the candidates’ spokesperson.

The next presidential debate is scheduled for Oct. 15 in Ohio.

Sanders’s campaign released a statement on Oct. 3, saying that they expect the 78-year-old senator to take a few days to rest before he continues his campaign operations. “He’s ready to get back out there and is looking forward to the October debate,” the statement said.

Sanders was hospitalized in Las Vegas on Oct. 1 after he experienced chest discomfort during a campaign event. On Oct. 2, he said on Twitter that he was “feeling good,” while using the opportunity to promote his “Medicare for All” plan that would significantly raise government spending and give the government a monopoly in the health care insurance industry.

He is one of three Democratic presidential candidates who are more than 70 years old, and the medical emergency will likely give rise to questions on whether the party should turn to a younger generation of leaders.

Thanks for all the well wishes. I’m feeling good. I’m fortunate to have good health care and great doctors and nurses helping me to recover.

None of us know when a medical emergency might affect us. And no one should fear going bankrupt if it occurs. Medicare for All!

In late September, Sanders unveiled his plan for generating revenue to fund costly social spending proposals through taxing the ultra-rich in the country. The socialist senator has repeatedly faced skepticism for “Medicare for All,” which some analysts estimate would cost $32.6 trillion over 10 years.

Sanders’s other plans, such as his “Housing for All,” also have a hefty price tag. The plan, which he says would provide every American with housing, would increase government spending by about $2.5 trillion over 10 years by some estimates.

Even Democrats have found the price tags for these plans hard to swallow. The United States is already struggling to pay for the current Medicare system, which serves a portion of Americans. The federal government paid $700 billion for Medicare in 2017, up 65 percent from a decade ago. The costs are growing at nearly 5 percent per year, and the Medicare fund is expected to deplete by 2026.

Socialized medicine all over the world has resulted in rationed care and long wait times.