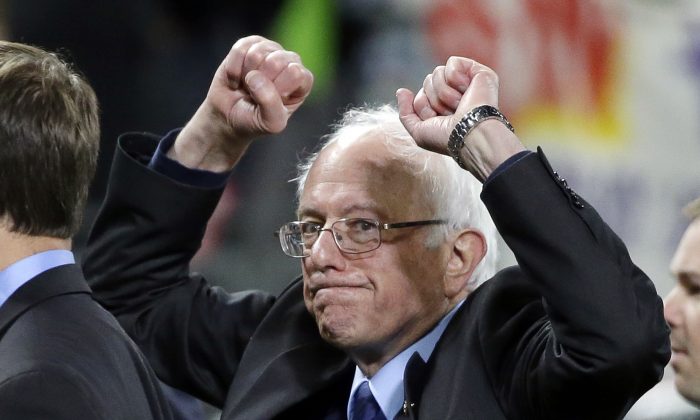 HONOLULU—Sen. Bernie Sanders has won the Hawaii Democratic presidential caucus, capping a day of strong wins in the West including Washington and Alaska.

The Vermont senator easily defeated former Secretary of State Hilary Clinton during Saturday’s nominating process, even though many leaders in the Democratic Party establishment backed Clinton.

While results in Washington, Alaska and Hawaii barely dented Clinton’s significant delegate lead, Sanders’ wins underscored her persistent vulnerabilities within her own party, particularly with young voters and liberal activists who have been inspired by her rival’s unapologetically liberal message.

In an interview with The Associated Press, Sanders cast his performance as part of a Western comeback, saying he expects to close the delegate gap with Clinton as the contest moves to the more liberal northeastern states, including her home state of New York. He also said his campaign is increasing its outreach to superdelegates, the party insiders who can pick either candidate, and are overwhelmingly with Clinton.

He added: “There is a path to victory.” With Clinton far in front, however, it is a difficult path.

Hawaii Democrats waited through long lines to cast votes for who should be the party’s presidential candidate in an election that organizers say drew thousands of new members to the polls.

The timing on the Easter holiday weekend didn’t deter voters, who packed school cafeterias and libraries to cast their votes.

“Everyone’s ‘feeling the Bern’ around here,” said Dana Ogle, 33, an arborist who voted for Sanders.

Polls opened at 1 p.m., and there was no set closing time, but some polling stations on Oahu were chaotic as voters tried to figure out what line to stand in and where to go.

Bill Lui-Kwan, a Honolulu resident who described himself as semi-retired, showed up around noon—an hour early—to vote, but was waiting at the back of a long line at 2 p.m., nearly an hour after voting began. Like many people throughout the Hawaiian islands, he was at a polling station that didn’t have clear signs or directions about how to check in or where to stand in line.

“I’m just disappointed in the disorganization,” Lui-Kwan said. “You should encourage people to come out and vote.”

Stephanie Ohigashi, chairwoman of the Democratic Party of Hawaii, said the polling station where she was on Maui was very organized.

“I know that there’s massive crowds, unexpected I think for some of these areas, and maybe that added to some of the disorganization,” Ohigashi said.

Powerful Hawaii Democrats poured their support behind Clinton, including several former governors and most of the congressional delegation. But U.S. Rep. Tulsi Gabbard broke with the trend to support Sanders, citing his vote against intervention in Iraq and his judgment about when it’s appropriate to use military force.

Sanders supporters said they were drawn to him by his support for the middle class, environmental positions and cautious nature when it comes to war.

“He has been a lifelong advocate for workers’ rights, and a friend to families and working people, and he has the strongest position on climate change,” said Tim Zhu, 28, a graduate student at University of Hawaii at Manoa.

Clinton supporters in Hawaii touted the former secretary of state’s experience and her work for equal rights.

June Motokawa, 73, a retired educator, said she was voting for Clinton because of her history supporting education, teachers, children, women, girls and “humanity in general.”

“She’s always said the right things, she was always progressive on the issues, she was never afraid and never really backed down in support of educators,” Motokawa said.

Doors opened at 11 a.m. at Aliiolani Elementary School in Honolulu, and families and neighbors gathered in a cafeteria while children adorned with ‘Bernie’ campaign stickers ran around with their friends. Many showed up an hour or two early, but voting began a few minutes late, and dozens were still in lines to vote an hour after voting began.

Scott Foster, a volunteer with the Democratic Party, estimated about 1,200 people showed up to vote at the location in Kaimuki.

“In an off-year election, we’d be lucky to have 200 people here,” Foster said.

“Hillary” signs adorned the walls inside and outside the school. Some Sanders supporters said they were surprised to find out the caucus rules allowed campaigning on-site, and they scrambled to put up Sanders signs as fast as they could.

“It’s different from a general election when you’re not allowed to wear candidate shirts,” Wilbur said.

As people waited inside the school cafeteria to vote, someone announced Sanders had won Alaska, prompting cheers from around the room. The Vermont senator also prevailed over Clinton in Washington state.

Hawaii will send 35 delegates to the Democratic National Convention this summer to choose the party’s presidential candidate. Twenty-five of Hawaii’s delegates will be allocated based on a proportion of Saturday’s vote, while 10 superdelegates will get to vote however they choose.

“A lot of people who called our headquarters to join the party were mostly older people who lived through something like an internment camp, or coming to Hawaii as an immigrant,” Ohigashi said. “They really wanted to make sure the Donald Trump rhetoric of fear doesn’t come to pass.”