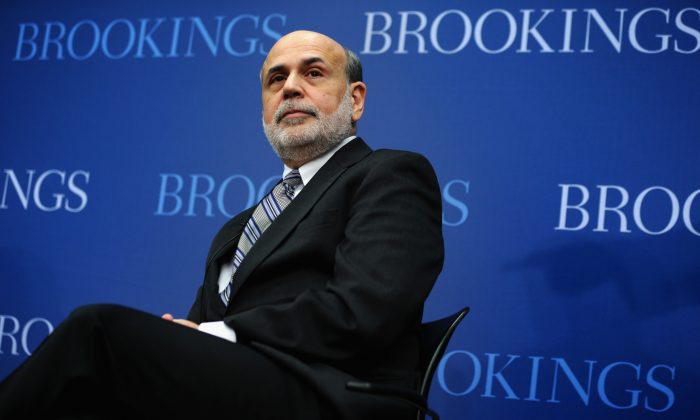 Former Fed Chairman Ben Bernanke is a controversial figure at home and abroad. He recently tried to dispel some of that controversy by blogging for the Brookings Institution. He has met with limited success.

Most people don’t like the Fed, or Bernanke, because interest rates were kept artificially low, reducing the income potential of people dependent on interest income, such as retirees.

How to Increase Returns for Your Retirement Savings

This is something Bernanke does not want to accept. “I was concerned about those seniors as well. But if the goal was for retirees to enjoy sustainably higher real returns, then the Fed’s raising interest rates prematurely would have been exactly the wrong thing to do,” he writes in his blog post.

You can lay most of the problems that we have in the economy to Fed policies past and present.
— John Williams, Shadowstats

He said by keeping rates lower for a longer period the Fed actually increases the chance of a better economy and higher returns in the future. In fact, he said the Fed only reacted to a recessionary economy which theoretically has a lower equilibrium interest rate and could not even influence longer term rates, such as the 10-year yield on U.S. Treasurys.

“The Fed did everything they could to make interest rates as low as possible. You still don’t have market driven interest rates,” said John Williams of Shadow Stats, an independent provider of U.S. economic statistics.

In fact, Williams only points out what Bernanke himself admitted in a speech given at Jackson Hole, Wyoming, in 2012 about the Fed’s quantitative easing program: “Research finds that the Federal Reserve’s large-scale [QE] purchases have significantly lowered long-term Treasury yields.”

Most people would agree with Bernanke from 2012 that bidding up Treasury prices artificially leads to lower yields and therefore lower incomes for people living on fixed income.

The Fed sets the rate according to the activity, and if activity is low, they will set the rate low.
— Sean Egan, co-founder, Egan-Jones Ratings

As for why the Fed was really doing this, Williams has two explanations: “They are trying to force people to put their money into the stock market which is highly risky,” and “the Fed is trying everything to keep the banking system together; that’s their primary motivation.”

The Fed has largely succeeded in both endeavors, as stocks have been on a tear since the first QE program in 2009 and no large bank failed since the end of 2008.

This, however, doesn’t mean Bernanke is completely wrong about a slow growing economy offering lower returns on capital and low inflation leading to a lower equilibrium interest rate.

“The Fed sets the rate according to the activity, and if activity is low, they will set the rate low. Overall, growth has been tepid at best and therefore the demand for capital has been significantly less than historical averages,” said Sean Egan, co-founder of rating agency Egan Jones.

He said that high unemployment in the Western world, especially in Europe, does not warrant high capital investment in developed countries. Higher demand for capital means its price (the interest rate) would have to go up, together with its prospective return. This, however, is not the case.

Robert Brusca of FAO Economics adds an international element to this. “Capital is mobile and the corporation can go where the labor is cheapest. That’s constantly putting the U.S. and Europe on the defensive,” he said.

On the other hand, supply of capital is ample, further driving down interest rates: “On the supply side you had a dramatic increase via the actions of the central banks. This is not limited to the Fed,” said Egan, and refers to the massive expansion of central bank balance sheets.

These developments explain the low interest rates in the current environment. The question, however, arises: How did we get into this situation in the first place. Bernanke blames most of the problems on external “headwinds,” which could not have been foreseen and of course the Fed doesn’t have anything to do with creating.

The debt collapse we had in 2008 was a result of what Greenspan was encouraging and what Bernanke took over.
— John Williams

“During my time as Fed chairman I frequently cited the economic headwinds arising from the aftermath of the financial crisis on credit conditions, the slow recovery of housing, and restrictive fiscal policies at both the federal and the state and local levels,” said Bernake.

John Williams thinks these headwinds have mostly been created by the Fed: “You can lay most of the problems that we have in the economy to Fed policies past and present,” he said.

He argues that the low rates set by Bernanke’s predecessor Alan Greenspan led to excessive debt expansion that was wasted on unprofitable products.

“Greenspan encouraged more consumption by debt expansion, like the subprime mortgage bubble. The debt collapse we had in 2008 was a result of what Greenspan was encouraging and what Bernanke took over.

The collapse that followed was due to the poor policies of the Fed in terms of debt expansion,” he said. Ben Bernanke, unlike Alan Greenspan, would never admit to that.