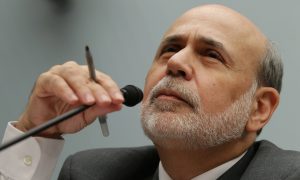 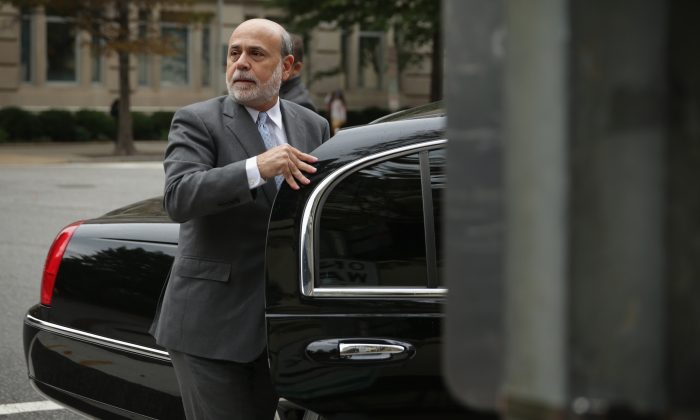 Former Chairman of the Federal Reserve Ben Bernanke arrives at U.S. Court of Federal Claims in Washington, D.C., to testify at the AIG trial, on October 10, 2014 in Washington, DC. (Alex Wong/Getty Images)
Business

Bernanke: Germany Has a Problem

In his third blog post in a week for Washington-based think tank Brookings Institution, Bernanke criticized Germany last Friday for not working to reduce its trade surplus, which could be hurting its neighbors, he said. Ahead of the spring’s international economic G-20 summit, Bernanke laid down recommendations for what Germany could do on its part to alleviate deep recession in the eurozone.

According to Bernanke, there are three main reasons why Germany has such a large trade surplus, that has even exceeded China’s.

Sure, Germany produces high quality goods, with a lot of demand, but the main explanation for the surplus is that the euro is weak. The currency Germany shares with 18 other countries is too weak to be consistent with German trade.

Last July, the International Monetary Fund  (IMF) estimated that Germany’s inflation-adjusted exchange rate was undervalued by 5 to 15 percent. And the euro has only grown weaker since.

“The comparatively weak euro is an underappreciated benefit to Germany of its participation in the currency union,” wrote Bernanke.

A third reason for the surplus is that Germany’s tight fiscal policy keeps domestic spending, including spending on imports, reined in.

What is often seen as a sign of a strong economy is criticized by Bernanke as a problem, since other members of the eurozone are in deep recession. Bernanke argued that Germany’s trade surplus is actually hurting its neighbors who are battling high unemployment and are in perilous fiscal situations where they cannot raise spending or cut taxes to stimulate domestic demand.

Imbalances in the eurozone are unhealthy, said Bernanke, as they lead to financial imbalances and unbalanced growth.

He recommended three solutions for Germany. First, invest more in public infrastructure to reduce the trade surplus by increasing domestic income and spending while also raising wages and employment. Secondly, raise the wages of German workers to increase domestic income and consumption and reduce the surplus. Third, Bernanke recommended targeted reforms such as tax incentives for private domestic investment and removing barriers to new housing construction.

“It’s true that easier monetary policy will weaken the euro, which by itself would tend to increase rather than reduce Germany’s trade surplus,” he allowed. Still, the more accommodative monetary policy would also cause inflation to rise throughout the eurozone, making it easier to restore competitiveness, and increase economic activity throughout the eurozone, including Germany.