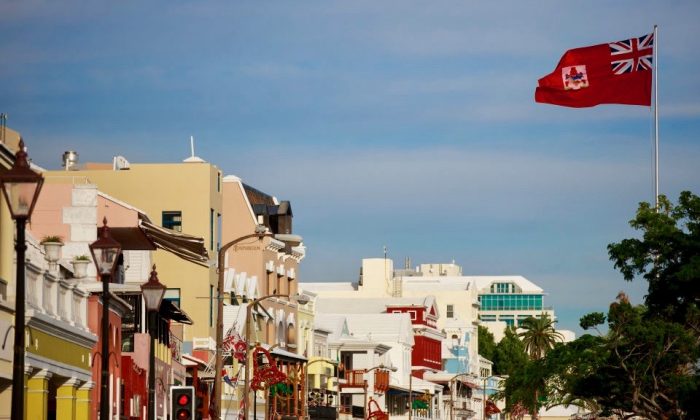 The flag of Bermuda flies along the commercial and retail district on Front Street, November 8, 2017 in Hamilton, Bermuda. (Drew Angerer/Getty Images)
Americas

A repeal of the law was approved Feb. 7. The repeal now only allows gay couples to enter domestic partnerships. Bermuda legalized gay marriage less than a year ago, in May.

Same-sex couples that were married during the brief period of legalization will be able to keep their status, but moving forward, same-sex couples can only legally obtain domestic partnerships. Only around six same-sex marriages occurred in Bermuda during the period after it was legalized, according to The Independent.

The Senate and House of Assembly of the island nation passed the legislation in December with support from politicians and the voting public, according to Daily Mail.

“The act is intended to strike a fair balance between two currently irreconcilable groups in Bermuda, by restating that marriage must be between a male and a female while at the same time recognizing and protecting the rights of same-sex couples,” Mr Brown said, via Daily Mail.

“[I]t would not be appropriate to use the power to block legislation, which can only be used where there is a legal or constitutional basis for doing so, and even then, only in exceptional circumstances,” said British Minister of State Harriett Baldwin, via Bernews.

The issue led to debate in the British House of Commons. When questioned by British Labour Member of Parliament Chris Bryant, Baldwin emphasized Bermuda’s right to choose.

“In engaging with the British overseas territories, we have to respect that they are separate, self-governing jurisdictions with their own democratically elected representatives and the right to self-government,” said Baldwin, via Bernews.