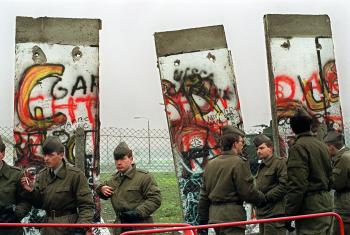 East German border guards demolishing a section of the Berlin wall in order to open a new crossing point between East and West Berlin at the border line near the Potsdamer Square on Nov. 11 1989. (Gerard Malie/AFP/Getty Images)
Europe

By Kremena Krumova
Print
The Berlin Wall, a symbol of division between Eastern and Western Europe for three decades, fell on Nov. 9, 1989.The winds of change in Eastern Europe shook the foundations of the wall. Images of Germans, relieved as they stood on the finally crumbling structure, capture the era. The wall’s collapse rippled back across Eastern Europe, and largely peaceful revolutions ended communist rule in one country after another. The Soviet Union fell just over two years later. Two decades on, we revisit the wall’s collapse and shed light on its significance.

SOFIA, Bulgaria—Hristo Hristov is an investigative journalist with the Dnevnik Daily. He is currently attempting to have Bulgaria open its archives on secret police. Hristov is the author of five books on communism and the secret police in Bulgaria, and is the recipient of an award for outstanding contributions to freedom of information.

“The main issue with the records is access to them,” he said. “It is important to mention that despite all the pressure, I won a court case for opening the archives of the secret police, the top secret of all archives of the former communist regime. Bulgaria has set a precedent for winning such a trial.”

“Curiously, the kick-off for this process happened months before Bulgaria was admitted in the EU,” he said.

This has taken 15 years, Hristov says. “We have come a long way to this day, though in comparison to other countries we’ve been much slower.”

Part of the reason for this is that in Bulgaria, the communist regime destroyed all resistance and opposition, Hristov said. “They didn’t allow anyone to be outside the party. So it’s very hard to find a public figure who has not been an agent.

The Council for Electronic Media, which regulates the activities of radio and television stations, doesn’t allow ex-agents to be members, Hristov explained.
Chairs of parliamentary commissions are also not admitted if they have served as secret police.

Hristov had taken a risk in trying to bring the archives to light. “I was robbed three times and forced to change my home three times.

“The rule is: if you show you are afraid, they will smash you psychologically. But if you play fairly and follow journalistic standards, you don’t have to be afraid. In Bulgaria, not many journalists dare investigate this topic. One of the reasons is that according to the latest news the presence of SS agents in private electronic media is 100%, incl. owners.”