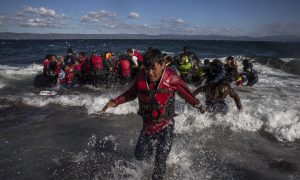 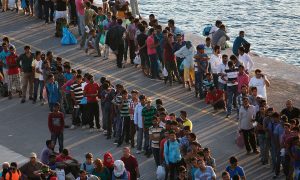 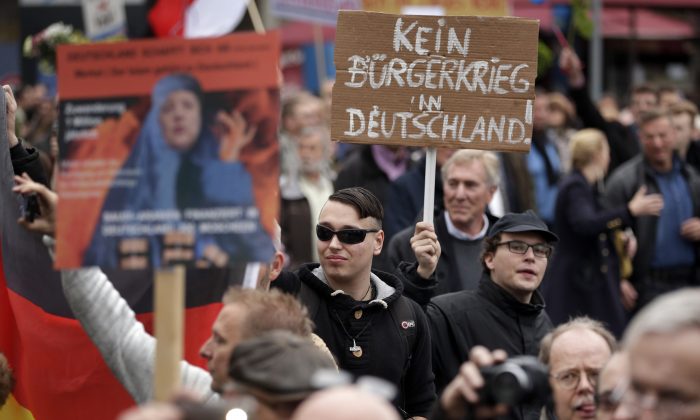 People take part in a protest rally of the German party "Alternative fuer Deutschland" (AfD, "Alternative for Germany") in Berlin, Germany, Saturday, Nov. 7, 2015. Text on the poster in the background reads "No civil war in Germany!" An anti-immigration party has staged a march in Berlin against the German government’s migrant policies, with demonstrators chanting "Merkel must go" and counter-protesters shouting "Nazis out." (AP Photo/Michael Sohn)
Europe

BERLIN—The latest news as tens of thousands of people fleeing war or seeking a better life make their way across Europe (all times local).

The Greek coast guard says it and European Union border agency Frontex have rescued a total of 383 migrants attempting the short but perilous crossing from Turkey to eastern Greek islands.

A total of nine boats, all full with passengers, were involved. Seven of them were inflatables, with the other two a wooden boat and a plastic boat.

Seas were relatively calm Saturday, resulting in no known fatalities overnight and early in the day.

For the first time in 11 days, no refugees died overnight in the crossing between the Turkish mainland and the eastern Greek islands, Greek authorities report.

“There have been (no fatalities) so far today, thank God,” a Greek coast guard spokeswoman said Saturday afternoon.

The short crossing can be very dangerous in high seas, with big waves sending overfull, flimsy boats crashing into the rocky coasts or causing them to capsize. The good weather has helped end a string of 10 days with fatalities.

Winds, however, have picked up starting in the afternoon and may reach up to 60 kph (37 mph) in the southeastern Aegean on Sunday. Around the island of Lesbos, the main point of refugee entry, they will be half as strong.

An anti-immigration party has staged a march in Berlin against the German government’s migrant policies, with protesters chanting “Merkel must go!” and counter-protesters shouting “Nazis out!”

Alternative for Germany, which isn’t represented in the national parliament but has seats in several regional legislatures, staged Saturday’s rally. The party rejects Chancellor Angela Merkel’s welcoming approach to refugees and some protesters carried banners reading “Stop Merkel, save Germany.”

Police estimated 5,000 people took part in the Berlin march and 800 in counter-demonstrations. They deployed 1,100 officers to prevent clashes and used pepper spray at one point but said there otherwise were no significant incidents.

Germany has seen 758,000 asylum-seekers arrive between January and October this year.

Oil-rich Norway has launched a campaign to tell would-be refugees that the government is planning tighter immigration rules and they could be sent home if their asylum application is turned down.

Justice Ministry spokesman Gunnar A. Johansen says Saturday that the English-language Facebook page “chiefly targets people whose applications are manifestly unfounded.” The page says that people who won’t leave Norway voluntarily “will be returned by force.”

Justice Minister Anders Anundsen says the current center-right government plans to reduce benefits for refugees up to 20 percent and introduce tighter immigration rules to stem the flow of asylum seekers to Norway.

Officials estimate that Norway, a nation of 5 million, will see up to 25,000 refugees, mainly from Syria, Afghanistan and Iraq, this year.

A senior Bavarian conservative is backing an idea that Germany’s interior minister raised, then shelved, to give many Syrians a status short of full asylum.

Interior Minister Thomas de Maiziere said Friday that perhaps many Syrians should get “subsidiary protection,” which comes with only a one-year renewable residence permit and wouldn’t allow them to bring relatives to Germany for two years.

The Christian Social Union, the Bavarian branch of Merkel’s conservative bloc, has talked tough on refugees — and one of its senior members says de Maiziere “is right.” General secretary Andreas Scheuer told Bild am Sonntag newspaper: “Hundreds of thousands of Syrians are getting protection here, but it must be the so-called ‘subsidiary protection’ status.”

Germany has seen 758,000 asylum-seekers arrive between January and October this year.

German Chancellor Angela Merkel is underlining the need for “a fairer distribution in Europe” of refugees as European Union leaders prepare to meet this week with their African counterparts.

Germany saw 758,000 asylum-seekers arrive between January and October. Many other EU countries have been reluctant to take any significant number.

Merkel says in her weekly video message Saturday: “We must speak again and again about the fact that the question of how we deal with refugees is a common question for all European member states,” at least those that have signed up for the Schengen passport-free travel area.

EU and African leaders will meet in Malta on Wednesday and Thursday. Merkel said Europe will discuss what countries it can conclude agreements with on taking back those whose asylum applications were rejected.

Swedish authorities say an empty building intended to house refugees has been burned to the ground in southwestern Sweden, the latest suspected arson fire to hit asylum centers or buildings being renovated for refugees.

Police in Vastra Gotaland say they suspect Saturday’s blaze that raged through a cluster of buildings and destroyed one completely to be arson.

Earlier, a center housing unaccompanied children in southern Sweden had its windows smashed and anti-foreigner slogans sprayed on it. One person was detained in connection with the vandalism.

In recent weeks, the Scandinavian country has seen over 20 arson attacks as an influx of refugees has surged. Sweden says migration authorities are overstretched and up to 190,000 asylum-seekers are expected to arrive this year.