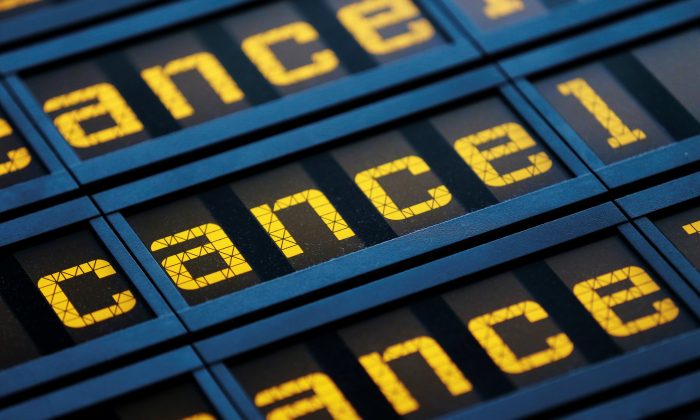 A display panel shows cancelled flights during a warning strike by ground services, security inspection and check-in staff at Tegel airport in Berlin on Germany on March 13, 2017. (REUTERS/Hannibal Hanschke)
International

FRANKFURT—Strikes at Berlin’s two airports caused 660 flights to be canceled on Monday as part of an ongoing pay dispute with ground staff.

“At Berlin Schoenefeld, 195 flights were canceled and at Berlin Tegel 465 flights,” Berlin Airport spokesman Daniel Tolksdorf said on Monday, adding that this amounted to almost all flights being canceled.

Workers at Berlin’s Tegel and Schoenefeld airports are striking from 4 a.m. local time on Monday until Tuesday at about 5 a.m. local time, German Union Verdi said.

The union wants an increase in pay for ground staff to 12 euros ($12.80) an hour from about 11 euros as part of a one-year collective agreement. Management first offered about 10 cents more an hour over four years and then improved that offer to an 8 percent increase over three years.

As well as Lufthansa, carriers including Air Berlin, easyJet and Ryanair serve the two airports.