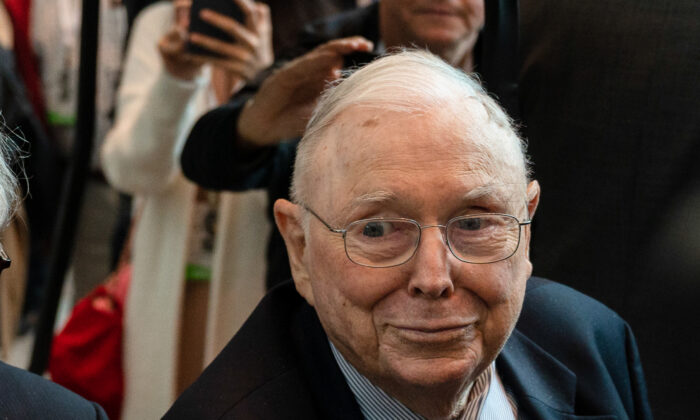 The current markets are apparently “even crazier” than the dot-com era with overvalued prices and self-centered cryptocurrency investors, said Charlie Munger in a conference call on Friday.

Berkshire Hathaway Vice Chairman Charlie Munger, 97, is a polymath and the trusted partner of one of the world’s biggest investors, Warren Buffett. Munger was addressing Australian investors at the Sohn Hearts and Minds conference in Sydney when he made the frank remarks.

“I think the dot com boom was crazier in terms of valuations than even what we have now. But overall, I consider this era even crazier than the dot-com era,” Munger said to Dr. Mark Nelson of Sydney hedge fund Caledonia, who conducted the video interview for the charity conference.

Many companies are trading at 35 times earnings, which Munger said dissuades ordinary investors from making any proper returns. “It is hard to get results which could be called normal results in investing.”

He said that when you pay a higher amount to get a piece of the company, that reduces your future returns.

The veteran value investor was not too keen on cryptocurrencies. “I wish they’d never been invented,” he said.

Regarding the young crop of investors who are mostly millennials, the outspoken American billionaire said, “I don’t know what they’re like in Australia, but here they’re very peculiar: very self-centered and very leftist.”

Munger also expressed admiration for Elon Musk, whose recent gains have secured his position at the top of the world’s richest list with a pile of almost $300 billion. Warren Buffett is not too far behind, at the 10th position, with just over $100 billion. Munger has a net worth of $2.2 billion.

During the dotcom era, which started during 1995–1997, investors poured money into “hot” internet companies with little to no revenues. It peaked in 1998 and crashed in 2000 with the Nasdaq falling nine percent in a day, and around 25 percent in a week.