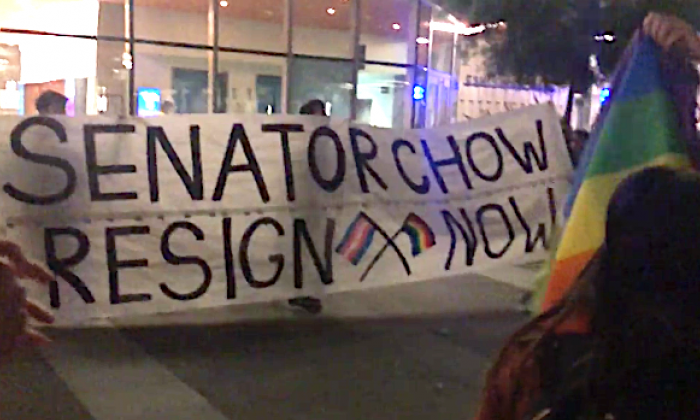 Berkeley Student Senator Faces Backlash for Standing Up for Her Faith

BERKELEY​, Calif.—Student Senator Isabella Chow, who recently abstained her vote on a resolution to support the interests of transgender students because of her traditional Christian beliefs, has been targeted by protests at UC Berkeley.
​
​“If trans students are under attack, what do we do?” a female student leader in the campus repeatedly shouted on the evening of Nov. 7th before the student government’s senate meeting. “Stand up, fight back!” hundreds of students responded.

​On Oct. 31st, the Senate of the student government in Berkeley was scheduled to vote on the pro-LGTBQ resolution, and each student senator in the Senate meeting had three voting options: yes, no, or abstain.

​Chow abstained her vote, while the other 18 student senators voted yes.

​“In God’s eyes and therefore my own, everyone of you here today and in the LGBTQ+ community as a whole is significant, valid, wanted and loved—even if and when our views differ,” Chow stated in an open letter explaining her decision.

She also said that to love another person does not mean that she would silently concur the choices of that person.

“I believe that God created male and female at the beginning of time, and designed sex for marriage between one man and one woman,” Chow said in the letter.

​Chow said in her letter that her decision was based on conversations between herself and the Christian community she represented.

​Chow concluded in her letter: “I again affirm with all my heart that each one of you in this room deserves nothing less than respect, acknowledgement, legal protection and love,” and “the Christian community is here to love and serve this campus in the way that we best know how.”

​After Chow published her open letter, more than 1,000 people signed a petition demanding that she resign from the student government or face a potential recall.

​On social media, Chow was addressed with comments such as “mental imbecile,” “horrible person,” “see you in hell,” and others.

​“She could have merely abstained,” said Regan Putnam, president of the Queer Alliance Resource Center, the organization that originally requested the bill from the student Senate. “Nobody asked her to explain her vote.”

Putnam seemed to indicate that if Chow had not addressed her religious beliefs in writing, then she wouldn’t have faced such massive backlash.

Some people have wondered if students are being pushed to hide their religious beliefs on the Berkeley campus.

​“This is classic in a very liberal school like Berkeley, to be very hypocritical in a school called the home of free speech,” said Paul Preston, a former high school administrator, a radio talk show host, and the founder of the Agenda 21 radio station.

“The reality check [on Berkeley] is just free speech for a few,” Preston said.

​“I am ashamed of you all sitting here who have not denounced her [Chow],” said Alyssa Lou who pounded on the podium at the meeting.

“I am not attacking your [Chow’s] religious views. I grew up in Texas,” added Lou, who was also a former student senator.

​“We don’t live in a republic [state] any longer,” said Preston. “It is anything but free speech in Cal-Berkeley … They are the enemies of our constitution.”

​Preston said Christians have been discriminated against at Berkeley in the past. However, the school hasn’t said anything about it in public, while the students are often supported by their liberal professors in their political actions.

Chow told The Epoch Times that nine student organizations, which she used to be a part of, had already cut their ties with her, including her own political party in Berkeley.

​“I am morally outraged,” said Paul Taylor, the former California Republican candidate for the US Senate, who talked to The Epoch Times after learning the news.

Chow, a 20-year-old third-year student in Berkeley who speaks both English and Chinese and has a double major in business and music. Chow is a first-generation American, and her father is from Cambodia, while her mother is from Malaysia.

​“She follows her heart, and her heart teaches her to be herself,” said Ellen Lee Zhou, who was the Chinese-American independent candidate for San Francisco mayor in this year’s election.

Zhou said she supported Chow “for her rights under the constitution.”

​Facing the students who called her to resign and may possibly call for her recall, Chow was firm and stated that she was not planning to resign, as different voices need to be heard on the campus.