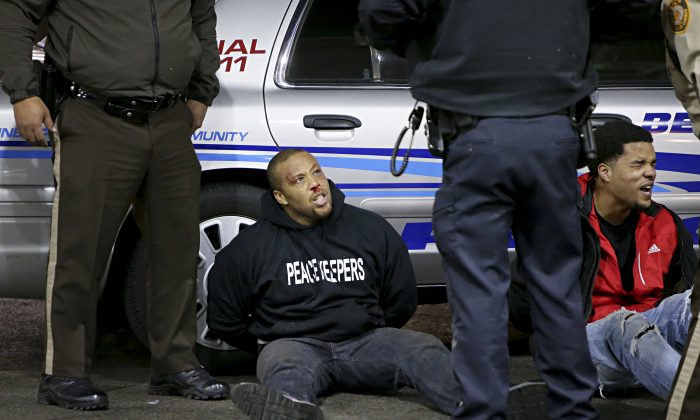 Police try to control a crowd Wednesday, Dec. 24, 2014, on the lot of a gas station following a shooting Tuesday in Berkeley, Mo. St. Louis County police say a man who pulled a gun and pointed it at an officer has been killed. (AP Photo/St. Louis Post-Dispatch, David Carson)
US

St. Louis County Police admitted that “bad choices were made” in the wake of the shooting death of teenager Antonio Martin, who was armed.

Police Chief Jon Belmar spoke with reporters on Wednesday morning, detailing the Tuesday night shooting. The unnamed officer involved in the shooting was doing a routine business check at a Mobil gas station at 11:15 p.m.

Belmar said that when the officer was in the parking lot, speaking with two people, one of the individuals “produced a pistol with his arm straight out, pointing it straight at the officer kind of from across the hood.”

The officer then grabbed his gun and fired about “three shots.”

St. Louis County Police released a video that shows the encounter. The officer was near the driver’s side of the vehicle and the suspect was on the other side.

Belmar said that “bad choices were made” by both the suspect, who is shown on camera raising a weapon in the direction, and the officer. The chief said the officer should have wore his police-issued body camera and could have used a Taser.

According to the St. Louis Post-Dispatch, a woman at the scene Toni Martin-Green, said the person who was shot was her 18-year-old son, Antonio Martin.

Regarding the protests after Martin’s death, Belmar said that one officer was injured by an apparent explosive device that was set off. Another officer was struck by a brick, Belmar added.

Belmar said that following the protests, extra police officers were deployed in the wake of the protests and riots over the Ferguson grand jury decision.

Addressing concerns that there might be another, Ferguson-like scenario in Missouri, “I don’t feel that’s going to happen,” Belmar said.

But he noted that protests against police after the incident “make it very difficult.” He added that the protesters have “jumped to conclusions.”