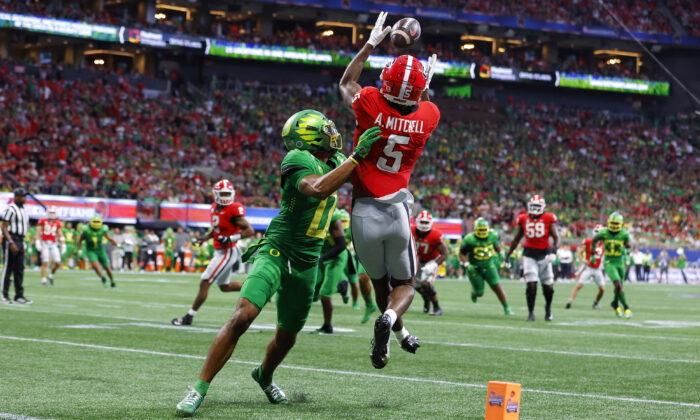 Adonai Mitchell (5) of the Georgia Bulldogs catches a pass for a touchdown over Christian Gonzalez #0 of the Oregon Ducks during the second half at Mercedes-Benz Stadium in Atlanta, on Sept. 3, 2022. (Todd Kirkland/Getty Images)
College Sports

ATLANTA—Stetson Bennett threw for 368 yards and accounted for three touchdowns, a revamped defense didn’t miss a beat, and No. 3 Georgia looked very much like a team intent of defending its national championship with a 49–3 rout of No. 11 Oregon on Saturday.

Bennett completed 25–of–31 passes with two touchdowns and ran for another score before calling it a day in the third quarter of the season opener, the Bulldogs leading 42–3 and having thoroughly ruined the debut of Oregon coach Dan Lanning.

After spending the last three years as Georgia’s co-defensive coordinator, Lanning got a look at his former team from the opposing sideline in a game played before a predominantly red-clad crowd at the home of the NFL’s Atlanta Falcons.

One awful performance into his head coaching career, Lanning saw just how far the Ducks have to go.

Bennett, the former walk-on who led a storybook run to Georgia’s first national title since 1980, returned for a sixth college season with a firm grip on the starting job after battling for playing time most of his career.

Bennett picked up where he left off in last year’s College Football Playoff, when he was offensive MVP of both the semifinals and the title game victory over Alabama.

Bennett guided the Bulldogs to the end zone on all six possessions he played. He ran for a 1-yard score and tossed TD passes of 4 yards to Ladd McConkey and 18 yards to Adonai Mitchell.

Carson Beck took over at QB and quickly made it 7 of 7, tossing an 18-yard touchdown pass to Kendall Milton for the final margin.

There were some questions about the Georgia defense, which had five players off the 2021 unit selected in the first round of the NFL draft.

Any doubts were quickly put to rest by a swarming group that looked very much like last year’s defense for the ages, making life miserable for new Oregon quarterback Bo Nix.

Nix transferred to Eugene after starting at Auburn the last three seasons. He immediately found himself facing a team he lost to three times while playing in the SEC.

Nix was picked off twice and the only offense he could muster led to Camden Lewis’ 35-yard field goal late in the second quarter.

Nix’s frustration was evident when he buried his helmet in his hands after a false-start penalty.

Georgia’s day was epitomized by a short pass to Darnell Washington that turned into a big gain when the 6-foot-7, 270-pound tight end shrugged off one defender hitting him high and hurdled another who tried to bring him down low.

Oregon: Lanning clearly has a lot of work to do to bring the Ducks up to a truly elite level.

While there’s no shame in losing to a team such as Georgia, Oregon expected to be much more competitive in their new coach’s first game.

Nix’s first game in green was especially disappointing. He completed 21 of 37 for 173 yards.

Georgia: The Bulldogs are off and rolling in defense of their national championship. They weren’t threatened at all by perhaps the toughest team on their schedule until a Nov. 19 game at Kentucky.

Bennett added another chapter to his remarkable story, and the Georgia defense still looks stifling even with all those guys in the NFL.

The Bulldogs are more than worthy of their No. 3 ranking. Coach Kirby Smart has built a program that reloads rather than rebuilds.

Oregon is sure to tumble in The Associated Press poll. But at least every game from here on out looks much easier than facing the Bulldogs.

Georgia: While this seemed like a home game for Georgia, its actual home opener is next Saturday against FCS opponent Sanford.