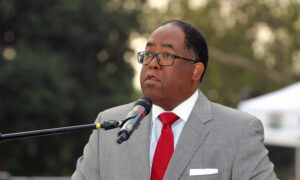 Ian Ritz
View profile
Follow
biggersmaller
Print
Former NAACP Executive Director Benjamin Hooks died Thursday, April 15 at age 85, after a long career of advocating human rights and fair treatment for African Americans in the U.S. A visitation is set for noon to 8pm Tuesday, April 20 at Greater Middle Baptist Church in his native Memphis. His funeral will be on Wednesday, April 21 at The Temple of Deliverance Church of God in Christ in Memphis, according to The Tennessean. The two ceremonies honoring him are likely to draw large crowds.

In addition to his work with the NAACP, Hooks was a prominent attorney in the American South during the late forties and early fifties. Hooks was a Baptist minister. Many members of the NAACP looked up to Hooks and he will be missed.

“Dr. Benjamin L. Hooks was among the greatest Americans of the 20th Century. He was a giant of hope and humanity who, as Executive Director and CEO of the NAACP, expanded the circle of opportunity in our nation for millions by greatly accelerating the desegregation of our largest corporations,” said NAACP President Benjamin Jealous on the group's website.

“Dr. Benjamin L. Hooks was a dynamic NAACP CEO who lifted the organization and by force of personality gave it a heightened presence on the national scene. He performed my wedding ceremony to my wife Pam and was a stalwart adviser during my tenure as Chairman of the NAACP Board of Directors. Dr. Hooks will be much missed,” said Chairman Emeritus Julian Bond on the NAACP website.

The NAACP mission is "to ensure the political, educational, social, and economic equality of rights of all persons and to eliminate racial hatred and racial discrimination." It started in 1909. It has been a major source for change for African Americans with Hooks holding the leadership position for close to 15 years.

Hooks was born in Memphis, Tennessee in 1925. He graduated from Howard University in 1944. In 1965 Hooks was appointed as Tennessee’s first African American criminal court judge.