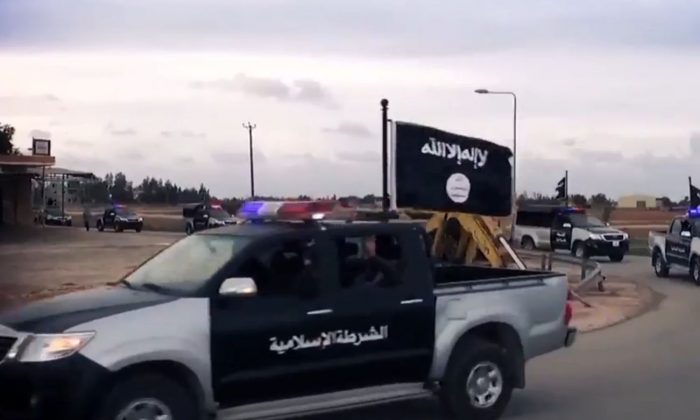 Video footage uploaded this week by an Islamic State-affiliated terrorist organization in Libya shows apparent “police” cars traveling outside of Benghazi while people salute and cheer.

Late last year, Ansar al-Sharia–the terrorist organization that filmed and uploaded the video footage of the “police” cars–has been affiliated with the Islamic State, or ISIS, since last year. According to MiddleEastEye.com earlier this month, a police force and court was set up just outside of Benghazi.

“Announcing the establishment of the force via their Twitter page, Ansar al-Sharia said the cars had patrolled the suburbs of al-Qawarisha and al-Hawari some 15 kilometres east of central Benghazi, to ‘secure the areas and establish [Islamic law] within them,'” said the report.

Over the weekend, a video uploaded by Islamic State militants purportedly showed the beheading of 21 Coptic Christians near the coast. As a result, Egypt launched airstrikes on IS-held targets in Libya.

The people of the cross, followers of the hostile Egyptian church,” said one of the messages in the gruesome video.

Meanwhile, Egypt’s president said in a radio interview aired on Tuesday that creating a U.N.-backed coalition was the best course of action to rid Libya of Islamic extremists.

The airstrikes were in retaliation for the mass beheading on a beach of a group of Egyptian Coptic Christians. A video of the killings was release late Sunday by a faction calling itself the Tripoli Province of the Islamic State group.

“We will not allow them to cut off the heads of our children,” he said. Asked whether he wanted to see a U.N.-backed coalition for Libya, he said: “I think there is no choice.” He added that any intervention to restore security in Libya should be done with the consent of the country’s people and government.

“We have abandoned the Libyan people as prisoners of the militias … The militias have to give up their arms and must work in a civil context. We have to disarm and prevent arms from falling into the hands of extremists,” el-Sissi, a general-turned-politician, told the French station in his first public comments after his country’s U.S.-made F-16s staged at least two rounds of airstrikes in Libya on Monday.