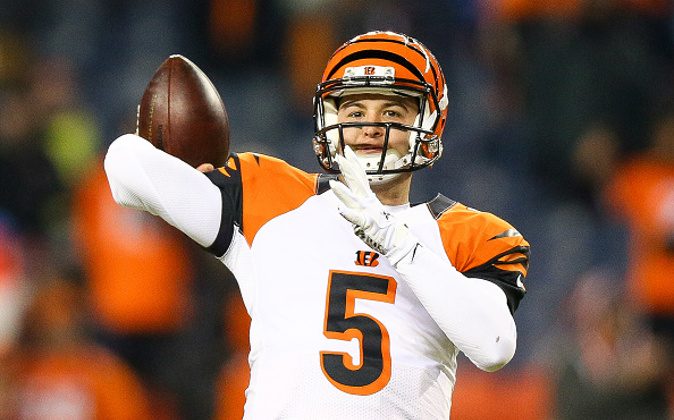 Quarterback AJ McCarron #5 of the Cincinnati Bengals throws as he warms up before a game against the Denver Broncos at Sports Authority Field at Mile High in Denver, Colo, on Dec. 28, 2015. (Justin Edmonds/Getty Images)
NFL

Already missing starter Andy Dalton, an injury to promising backup AJ McCarron could be big trouble for the Bengals.

The last play of Monday night’s contest between Cincinnati Bengals and Denver Broncos was a botched snap from center Russell Bovine to McCarron. With it being overtime and the Broncos having scored a field goal on the previous drive, the Broncos’ DeMarcus Ware recovered the fumble, promptly ending the game.

The play was certainly ugly, so the fact that McCarron hurt his hand trying to recover the fumble in a collision with Ware only adds insult to injury.

If McCarron can’t go, the next quarterback on the Bengals depth chart is Keith Wenning, a 6th round pick in 2014 from Ball State. Wenning was signed from the practice squad after Dalton had his injury in Week 14.

McCarron had an MRI on his wrist earlier this morning. The latest updates on McCarron’s injury per NFL.com’s Ian Rapport:

Source: #Bengals QB AJ McCarron suffered a sprained wrist. No fracture. Still a chance he plays Sunday. So, good news after his MRI


From the looks of it, McCarron is questionable for Sunday’s contest with the Ravens, though it would seem he should be available during wild card weekend two weeks from now.

In terms of play, McCarron has been relatively impressive. Whatever McCarron may lack in skill, he certainly does not lack in confidence. Likening himself to the backup-turned-Super-Bowl-Champion Tom Brady of 2001, McCarron came out firing against the NFL’s #1 defense, leading the Bengals to a 14-3 halftime lead over the Broncos.

Especially notable in the game was McCarron’s ball placement. Though the Bengal receivers made some spectacular catches on the night, McCarron’s throws were all on point, showing that he can make all the throws expected of an upper-tier NFL quarterback.

However, it would be a stretch to say that McCarron plays better than Andy Dalton. McCarron struggled throwing the ball downfield—as evidenced by his completing just 1 out of 6 passes of 20 yards or more, and as a result, tends to dink and dunk the ball. McCarron also seemingly lacks the ability to read and adjust to NFL defenses. McCarron was able to move the ball on the Broncos D in the first half, but struggled greatly when the the Broncos switched from man-to-man to a zone scheme to the second half.