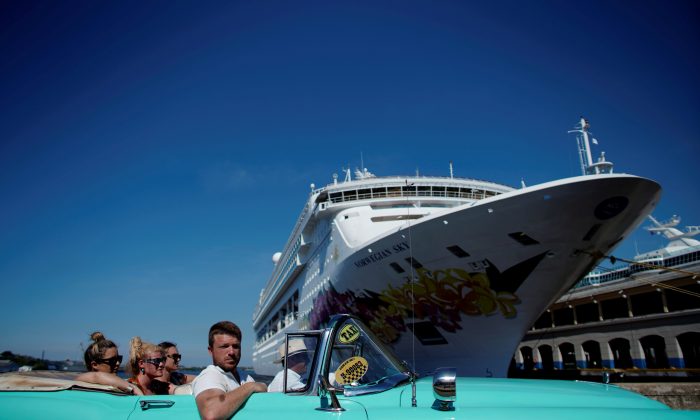 Tourists ride in a vintage car next to a cruise ship docked in Havana, Cuba, June 4, 2019. (REUTERS/Alexandre Meneghini)
Viewpoints

Benefactors of Cuban Loot Must Pay Up

When Fidel Castro confiscated private properties in Cuba in the 1960s, both the owners and the Cuban people suffered. The winners—the young dictator and his close comrades—profited from their ill-gotten gains by partnering with unscrupulous crony capitalists.

The present-day cronies, by and large from outside Cuba, are staring down the barrel of lawsuits that seek damages for theft. Since May, the Trump administration has, as explained by Secretary of State Mike Pompeo, given the victims of confiscation in Cuba the opportunity to right the wrongs of decades ago. The cases fall under the 1996 Helms-Burton “Libertad” Act.

Nearly 60 years have passed since the confiscations began, but the damages are easily identifiable for tens of thousands of Cuban exiles and their descendants. The Castro regime also carried out the mass theft in a brazenly public manner, so there is no dispute over its occurrence and the amount of property affected.

The questions at hand, therefore, are whom to prosecute and whether this is a worthwhile endeavor on the part of U.S. courts.

The Cuban exiles of the late 1950s to 1970s had to start life over in the United States and elsewhere. They regrouped, mostly in Florida, and achieved notable success as business people, workers, and artists. From popular culture, for example, we know of singer Gloria Estefan and actor Andy García. The latter received the Alexis de Tocqueville Award from the Independent Institute for his dedication to “the principles of individual liberty as the foundation of free, prosperous, and humane societies.”

Between 1960 and 1962, Operation Peter Pan brought 14,000 unaccompanied minors to the United States, often to never return or see family again. Many became influential, including Carlos Eire, a historian of religion at Yale University.

My own mentor, José Azel, was among them and left as a 13-year-old in 1962. The author of “Mañana in Cuba“ (2010) and “Reflections on Freedom” (2017), Azel knows his own family home was taken and divvied out to other families by the regime. The loss of his homeland still saddens him, but he says he’s turned the page regarding the hope of ever having that specific property returned. Also, given the crushing poverty on the island, “in good conscious, [he] would not feel good about displacing these families.”

The case of foreigners enjoying profits on account of the theft, though, leaves little room for sympathy. Mickael Behn and Javier Garcia-Bengochea have federally certified claims to confiscated properties in Cuba, including buildings and piers at the Havana port. The use of these assets by U.S. companies rubs salt into the wound, and the pair are taking up the opportunity to bring multimillion-dollar lawsuits against Carnival Cruise Lines.

“They just hoped my family would die and fade away,” Behn said at a press conference in Miami. His $45 million case is one of 5,911 approved claims, of which 817 were worth more than $50,000 prior to 1972. Including people who later became citizens and others who didn’t file in time, the State Department believes there could be as many as 200,000 legitimate claims worth $8 billion.

The Marxist-Leninist Castro passed away in 2016, and the number of living members of his original takeover continues to dwindle. Many of those involved in the revolution, such as the late Commander Huber Matos (1918–2014), actually opposed communism. Matos and others defected once they saw Castro and Ernesto “Che” Guevara implementing their authoritarian dreams. However, dissident efforts to unseat the regime never succeeded.

Participants in the Soviet-allied regime who stayed and died in Cuba defiantly escaped justice. Far from a workers’ paradise, they left a legacy of destruction and broken promises. As described in the brilliant 2014 essay by Michael Totten, “The Last Communist City,” Cuba’s “small group of economic and political elites live in a rarefied world high above the impoverished masses. … [Havana] is filled with people struggling to eke out a life in the ruins.”

As hard as it may be to believe now, Cuba was one of the world’s most economically developed nations prior to the 1959 revolution. Now, the average salary is about $20 per month, and the nation can barely produce economic data. What does come out, funneled through the state’s media monopoly, isn’t to be trusted.

Amid this chaos and anthropological damage, we are left facing the regime’s recipient heirs and users of the stolen property. That includes some or all of the 60 known U.S. companies doing business in Cuba. Since private enterprise is all but banned on the island, aside from a delineated list of personal-service jobs, the businesses you see and that tourists enjoy are public-private partnerships with the Cuban military.

That’s why exiles are so sensitive about sending money or even traveling to the island: They know their funds end up in the pockets of the criminals at the top. When someone stays at Hotel Nacional in Havana, for example, the workers receive pennies on the dollar. The “hiring” process in the public-private partnerships translates to the regime providing workers, collecting the salaries, and then keeping 90 percent or more for themselves.

As a recent exile explained to me recently, all the common people on the island are, in effect, prisoners of the regime. Cubans at home and those sent abroad, including medical professionals, are modern serfs.

Those doing business on the island, including foreign state-owned enterprises and private companies in the United States, know this, too. They have to look the other way or somehow justify what they do as better than the alternative.

Some economic activity is better than none, the logic goes. Unfortunately, this attitude supports the regime and defers pressure to liberalize the economy and respect civil liberties, of which there are none on the island. Just ask exile Rosa María Payá, whose father was assassinated by the regime after he gathered a petition for democracy.

The Cuban regime remains unwilling to accept wrongdoing and respect any rule of law, even if that means subsistence economic conditions for residents. Short of an invasion, à la the Bay of Pigs fiasco of 1961, there is little anyone can do to collect damages from the regime.

“For years,” Azel explained, “victims of Cuban crimes have won court victories which they have been unable to collect.”

The only successful instance came after the Cuban air force shot down two Brothers to the Rescue planes in the 1990s. In 2001, after five years of legal activities, the families of the four men killed received a combined $96.7 million—money from the Cuban government frozen in U.S. accounts.

However, without any more such funds available, U.S. courts will struggle to extract anything from the regime. Even going after foreign-based partners with the regime, Azel sees no payouts coming to the victims.

Part of the problem is the ambiguity of the Libertad Act, since it excludes authorized travel to Cuba. The Treasury Department even licensed cruises to carry out their activities, although the Trump administrations recently banned cruises from the United States to Cuba.

Furthermore, the fee to initiate one of these lawsuits is $6,458, so that, too, will stand in the way of many people initiating the drawn-out undertaking.

Until Congress reforms the law and finds a way to more effectively influence the Cuban regime, the Libertad Act lawsuits will remain largely symbolic. Nevertheless, those changes can happen. The lawsuits also bring the truth about Cuba’s despotism into the public consciousness and ready the way for restorative justice, when it becomes more feasible.