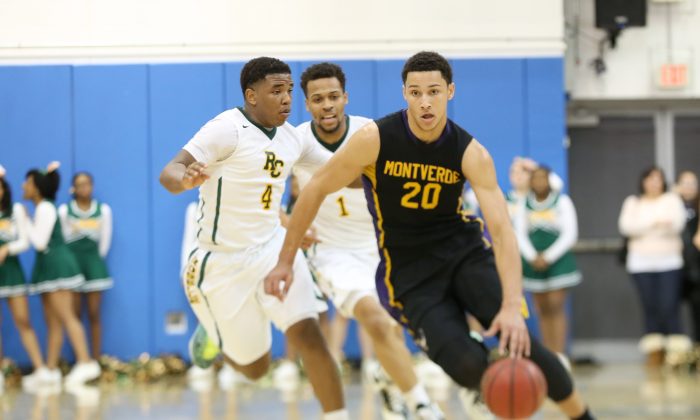 Ben Simmons, an Australian who plays at Florida’s Monteverde Academy, is being compared to LeBron James.

Simmons, 18, is committed to LSU next season.

“Is Montverde Academy’s Ben Simmons the best prep player in the country? A whole lot of college coaches think so, and the prep coaches who have attended all the big tournaments compared him to LeBron James in his pure dominance of the competition,” Kyler reported.

“While comparing any high school player to a Hall Of Famer like LeBron might be a little unfair, what was clear in talking with coaches and scouts was that Simmons is far and away the best non-college player playing and one of the better prospect players many of the coaches have seen in a long time,” Kyler added.

This isn’t the first time comparisons between Simmons and James have been noted. Monteverde coach Kevin Boyle, who has coached Kyrie Irving and Michael Kidd-Gilchrist, among other players, told SNY.tv last season that Simmons “can have as much of an impact in high school this year as LeBron did as a senior.

“Not saying he’s as good as LeBron, but I’m hoping he has as much of an impact,” he added. “As a physical force with skill, he is probably the closest to him, than anyone since LeBron has played.”

Indeed, when Simmons attended the LeBron James Skills Academy in Las Vegas, James checked himself into the game to take on Simmons.

”We played a game and he was guarding me the whole time and I was guarding him, so it was fun,” Simmons told the Sydney Morning Herald. ”I thought he was going to teach us something, then we started playing, we started matching up. I scored a few buckets, he hit one, we got a fast break, I dunked it … it was a good feeling.”

“LeBron is more powerful but Ben is more fluid,” Boyle said. “You’ve got a long ways to go to be LeBron James, arguably the best player in the world. But in terms of grace and power and the ability to handle the ball, he (Simmons) is as dominant as we’ve seen for a guy that size.”

Simmons has also drawn comparisons to a young Lamar Odom, Anthony Davis, and “an athletic version of Boris Diaw.

One high-major assistant coach, watching the ambidextrous Simmons drive during a game last August, said that Simmons is ready to play in the NBA already. Dave Simmons, Ben’s father, taught him how to play based on his own experience playing professionally in Australia.

“I was the bruiser inside,” Dave told Bleacher Report. “He’s got the skills. I didn’t have a lot of those skills—the shooting and the understanding of the game. When I became a professional, I just thought I’ll coach my kids and make sure they can dribble, pass, shoot, play defense. All the basics.”

Simmons chose LSU in part because of a connection to assistant coach David Patrick but also because he wants to lead the program to greatness.

“I want to go to school where I can help build the start of something new. I know they had great players back in the day, you know, like Shaq and Pistol Pete. I just want to be one of those guys that’s remembered for helping build LSU,” Simmons told NOLA.com.

“At LSU, there’s a bunch of guys that can play the game well and they’re there for one reason and that’s to win. I feel that some guys go to other schools for their personal reasons. I wanted to go somewhere where I could leave a legacy but also play with a great team.”