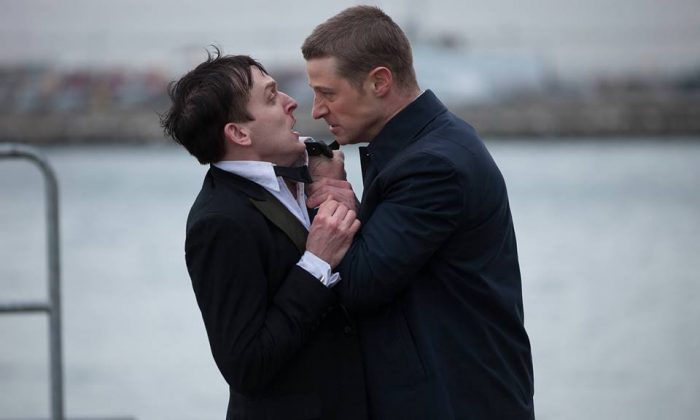 Ben McKenzie is one of the stars of the new hit show Gotham, which premieres on Fox on Monday night.

McKenzie plays a young James Gordon, the focus of the new series.

“Before there was Batman, there was Gotham. Everyone knows the name Commissioner Gordon. He is one of the crime world’s greatest foes, a man whose reputation is synonymous with law and order,” said Fox in its preview.

“But what is known of Gordon’s story and his rise from rookie detective to Police Commissioner? What did it take to navigate the multiple layers of corruption that secretly ruled Gotham City, the spawning ground of the world’s most iconic villains? And what circumstances created them – the larger-than-life personas who would become Catwoman, The Penguin, The Riddler, Two-Face and The Joker?”

McKenzie recently participated in a conference call about the series,  during which he noted that he voiced Batman in the 2011 animated movie “Batman: Year One.”

“I think you pick certain sort of reference points, at least stylistically, and then you need to go out and do what you would do on any other job, which is work on the script and work with the director and your fellow actors to bring the scenes to life, playing your beats, playing your objective, not really doing anything different than you would do in any other job except that you know there is a certain heightened style to it.”

McKenzie also revealed that while the Penguin and other villains are confirmed for Gotham, no non-human villains are as of now.

As for his character, he added: “The first season is Jim figuring out which cops in the department he can trust and which ones he can’t and there are some surprising twists and turns in these relationships. Some people that you would think are his enemies are actually kindred spirits and he needs to assemble a team, going forward, that he can actually use to bring justice.”

“He makes a decision in the pilot that will come back and bite him in the ass,” Ben told Hollywood Life. “Even though he made the right decision, the morally correct decision, it has negative ramifications for him going forward.”

Referring to the many secrets in Gotham, he added more.

“He’s got this fiancée who’s wonderful except she’s hiding secrets from him,” Ben continued. “He’s not going to be able to tell her what is going on with him in the job in order to protect her. I mean so many different things. Mooney [Jada Pinkett Smith] is vying with Falcone for control of the city. We’ll also introduce Don Maroni who is also vying for control. Everyone’s corrupt.”

As for McKenzie being married or having a girlfriend, he definitely doesn’t seem to be the former and no one has been able to concretely link him to any woman for a while.

McKenzie has a net worth of about $13 million.