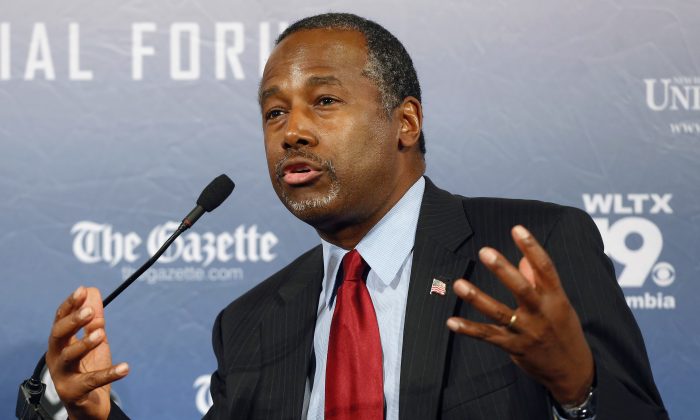 FILE - In this Monday, Aug. 3, 2015, file photo, Republican presidential candidate and retired neurosurgeon Ben Carson speaks during a forum, in Manchester, N.H. Responding to a question during an interview broadcast Sunday, Sept. 20, 2015, on NBC's "Meet the Press," Carson, a devout Christian, said Islam is antithetical to the Constitution and he doesn’t believe that a Muslim should be elected president. (AP Photo/Jim Cole, File)
US

Following Ben Carson’s comments about who built the pyramids in Egypt and their purpose, users on Twitter started making fun of the Republican presidential candidate with #bencarsonwikipedia .

Apparently, some were trying to get his Wikipedia page changed to include some of the more ridiculous quotes that people were making up.

“The Colossus of Rhodes was not actually a scholar.” #bencarsonwikipedia

ACORN was originally founded by squirrels looking for empty houses to store their nuts. #bencarsonwikipedia

The term algorithm is named after Al Gore, the inventor of the internet #bencarsonwikipedia

In the 1400s, bison were nearly driven to extinction following the discovery of the buffalo wing #bencarsonwikipedia

A magnet’s strength is determined by the blood type of the person holding it. #bencarsonwikipedia

If Dinosaurs had guns they might not have gone extinct. #bencarsonwikipedia

Carson made comments in 1998, saying that the pyramids were actually used to store grain, which drew ire from many people. He delivered the comments while addressing graduates at Andrews University in Michigan.

He addressed the video, which again surfaced in a BuzzFeed News article, when reporters asked him about it on Thursday.

“Some people believe in the Bible, like I do,” Carson told reporters, according to a CNN report. “And don’t find that to be silly at all… The secular progressives try to ridicule it anytime it comes up and they’re welcome to do that.”

He added: “I think that’s a plausible explanation to how they got built…I happen to believe a lot of things that you might not believe.”

A few weeks ago, people attempted to troll Carson via his Wikipedia page, including a fake blurb about him being connected to NAMBLA. “We’ve complained to Google and filled out requests to take it down that have been ignored,” Carson campaign communications director Doug Watts told Breitbart News in Oct. 27.