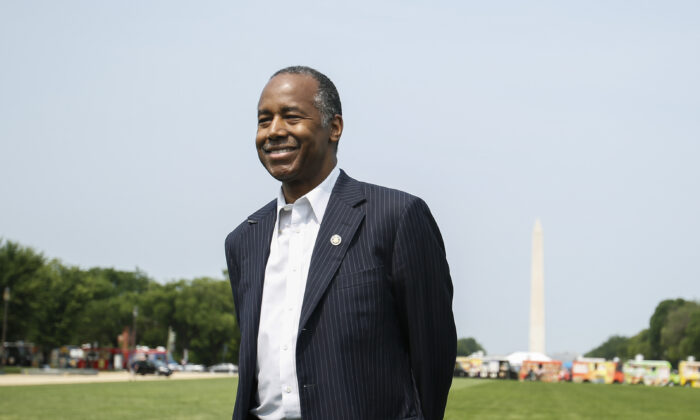 Secretary of Housing and Urban Development Ben Carson answers questions from the press on the National Mall in Washington on June 1, 2019. (Samira Bouaou/The Epoch Times)
Politics

WASHINGTON—Conservative thought leaders are applauding the Trump administration’s efforts to fix the so-called disparate impact rule in housing by replacing the current regulation, which tends to presume industry decisions are discriminatory with one that treats housing market participants more equitably.

Disparate impact, which is legal shorthand for the disparate impact theory of discrimination invented by the Supreme Court in its landmark 1971 decision in Griggs v. Duke Power Co., is inherently unfair and of dubious constitutionality, conservative legal thinkers say. In that decision, the court determined that Title VII of the Civil Rights Act of 1964 “proscribes not only overt discrimination, but also practices that are fair in form, but discriminatory in operation.”

In other words, this judge-made doctrine affords the plaintiffs’ bar a means of proving discrimination based on the effect of an apparently neutral policy or practice instead of on the intentions behind it. Under the theory, businesses and governments can be found liable for practices deemed to disproportionately affect minorities even if no discrimination was intended.

The new proposed rule is consistent with President Donald Trump’s campaign promise to downsize government and cut regulations that harm the economy. The cutoff for public comments on the rule was Oct. 18.

Many conservatives would prefer to abolish disparate impact altogether.

“It turns the law into a statistical game that has no relation to good or bad, right or wrong. People are punished for things they never chose to do, and in our system of law, that’s wrong.”

Roger Clegg, president and general counsel of the Center for Equal Opportunity, told The Epoch Times that the Griggs ruling was “a bad decision that unfortunately has metastasized,” and that disparate impact itself “is a very bad approach to civil rights enforcement.”

The legal doctrine “makes perfectly legitimate criteria illegal and encourages people to choose selection criteria with an eye on racial and ethnic results, which is exactly what civil rights legislation is supposed to prohibit,” Clegg said.

The left, with its abiding belief in the power of government to do good, wants the rule to stay as it is.

Lisa Rice, CEO of the National Fair Housing Alliance, and Douglas Merrill, CEO of ZestFinance, argued in a CNBC op-ed that the proposed rule would tilt the field against minority borrowers.

The changed rule “would make it exceptionally harder for consumers to challenge discriminatory practices, making it virtually impossible to show that a lender is unnecessarily denying people credit,” they wrote. The new rule would also “immunize lenders that use unfair credit underwriting models as long as they don’t use clearly discriminatory factors in making or rejecting a loan.”

Traditional underwriting criteria are unfair to minorities, they said. Although criteria such as length of credit history or number of credit inquiries may “appear harmless in isolation,” they can “turn out to discriminate against borrowers of color, especially when combined with other factors.”

The current disparate impact regulation made under the Fair Housing Act (FHA) forbids discrimination against individuals in protected categories related to race, sex, or religion, in the sale, rent, or financing of housing-related activities.

It’s unfair that local governments and businesses can be held liable for “policies and ordinances that are neutral on their face, neutral in intent, and neutrally applied but under which a protected minority group is disproportionately affected.”

“Everyone agrees that discrimination has no place in society,” Carson wrote. “But everyone also agrees that a city should be able to require that landlords kill rats without facing a lawsuit.”

Carson is alluding to a 2010 case known as Gallagher v. Magner, in which a federal appeals court permitted a lawsuit to go forward against Saint Paul, Minnesota, for aggressively enforcing its rat removal policy. Landlords argued the crackdown on vermin had an illegal disparate impact because it would make the affected housing more desirable and drive up rents, which in turn would disproportionately affect minorities.

But under pressure from the Obama-era Justice Department, the city withdrew its appeal that was pending in the Supreme Court and the Obama administration enshrined some of the disparate impact principles articulated in that case in a new, far-reaching FHA rule that made it too easy—in the view of conservatives—for tenants and others to prove discriminatory effect.

Then in 2015, the Supreme Court ruled 5–4 in Texas Department of Housing and Community Affairs v. Inclusive Communities Project Inc. that there had to be some reasonable limits to disparate-impact liability under the FHA. Such limits help to avoid setting “our Nation back in its quest to reduce the salience of race in our social and economic system,” then-Justice Anthony Kennedy, backed by the court’s four liberal justices, wrote for the majority.

The new rule now under consideration attempts to make HUD policy conform to the limiting principles laid down by the Supreme Court in the 2015 ruling. Under the rule, plaintiffs claiming discrimination will face a heightened burden of proof. They will have to show that the practice to which they object is “arbitrary, artificial, and unnecessary,” as well as show “a robust causal link between the challenged policy and the disparity that is not established by statistical imbalances alone,” according to Carson.

The new rule will also relieve lenders of liability for the effects of automated decision-making systems such as the algorithms banks and landlords routinely use to make financial decisions, according to a summary by CityLab.

The current rule imposes a three-stage process for assessing disparate impact: A plaintiff makes a claim, a defendant presents a rebuttal, and then the plaintiff replies.

“Defendants would also be able to assert as a complete defense that the actions they took were required by other state, local, or federal laws,” Carson wrote. “It is only fair that a party should not be found to violate one law for following another.”

The new rule will also make the litigation process more efficient, Carson said, by providing “plaintiffs with a roadmap for pleading stronger cases (evidence shows that only about 20 percent of claims are successful on appeal) while empowering defendants to assert effective defenses earlier in the process—saving them and their customers time and money.”

These changes will ultimately “lead to more innovation and an increase of lower-cost housing and related services.”

“It would be nice if they got rid of the disparate impact analysis altogether, but at least now it doesn’t presume guilt,” Almasi told The Epoch Times. “The Obama-era rule said unbridled racism was everywhere and presumed landlords, lenders, and others in the real estate field were guilty of racial discrimination.”

Richard Samp, chief counsel at Washington Legal Foundation, said he, too, as “a theoretical matter” has “problems with a disparate impact analysis,” but said bringing the HUD rule into conformity with the 2015 court ruling makes sense.

Until 2015, it wasn’t at all clear whether disparate impact liability existed under the FHA, but the Supreme Court’s “compromise decision” in the Inclusive Communities case explained how imposing that kind of liability can cause very serious problems, Samp told The Epoch Times.

The court held that disparate impact liability may continue to be litigated, but “we have to give very broad leeway to government agencies that are trying to uphold zoning and health and safety regulations.”

The Supreme Court found that the FHA “was not adopted to support rodent infestations,” Samp said. “HUD has very correctly recognized that you have to impose strict limits on this or you end up with absurd results such as the rat policy.”

Clegg said the Trump administration’s proposed changes to the disparate impact regulation make the rule “closer to what Justice Kennedy and common sense would require.”