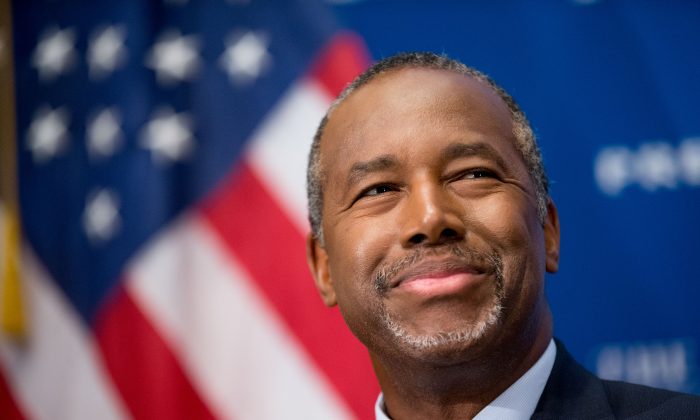 In this Oct. 9, 2015 photo, Republican presidential candidate Dr. Ben Carson speaks at a luncheon at the National Press Club in Washington. (AP Photo/Andrew Harnik)
US

The reports contain a 'bunch of lies,' GOP candidate says
By Jack Phillips

Ben Carson went after CNN for its report into his past, saying it contains a “bunch of lies.”

“This is a bunch of lies, that is what it is,” Carson said on CNN’s “New Day” when he was asked about the report that touched on whether he really had a violent childhood. “This is a bunch of lies attempting to say I’m lying about my history, I think it’s pathetic, and basically what the media does is they try to get you distracted.”

Later, Politico published a story saying Carson fabricated “a central point in his inspirational personal story” about his application and acceptance at the U.S. Military Academy at West Point. Carson has spoken for years about the story. In his book, “Gifted Hands,” Carson said he was introduced in 1969 to Gen. William Westmoreland, who ended his command of U.S. troops in Vietnam. When the two met, Carson said Westmoreland he offered him a “full scholarship” to the academy.

However, West Point said it had no record of him applying or getting an extended admission.

“In 1969, those who would have completed the entire process would have received their acceptance letters from the Army Adjutant General,” Theresa Brinkerhoff, a spokeswoman for the academy, told Politico. “If he chose to pursue (the application process), then we would have records indicating such,” she said.

The CNN report touches on people who Carson knew in school, and it said he did not have a violent history as a child.

“I saw your article. I didn’t see any elementary school friends there,” Carson told CNN. “Obama was not vetted like this,” he added, saying that it “doesn’t even come close to what you guys are trying to do in my case.”

CNN looked into claims about his past, concluding it was unable to verify any of the violent incidents, which were also detailed in “Gifted Hands.” They include stories where he tried to beat his mother with a hammer and punched a classmate in the face. CNN talked with people who attended his elementary school as well as his junior high and high schools.

Speaking on Fox News, Carson said, “Those claims [about him having a violent childhood] are absolutely true. You know, I am 100 percent sure that they’re true. And this is simply an attempt to smear and to deflect the argument to something else.”

Regarding the names of people he used in his book, he said they were changed.

“The person that I tried to stab, you know, I talked to today said would they want to be revealed? They were not anxious to be revealed.”