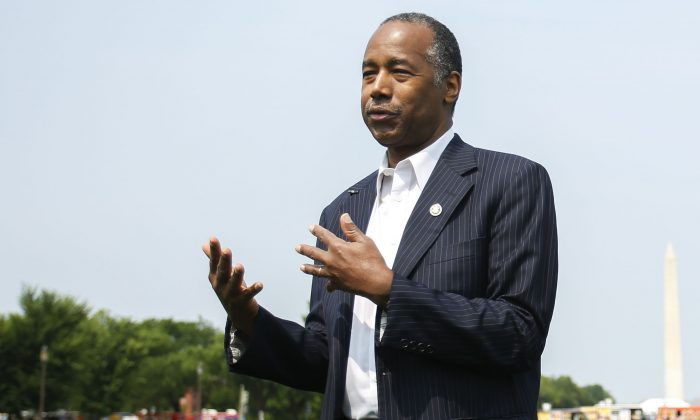 Secretary of Housing and Urban Development Ben Carson answers questions from the press after delivering remarks at the Innovative Housing Showcase on the National Mall in Washington on June 1, 2019. (Samira Bouaou/The Epoch Times)
Politics

Dr. Ben Carson, the head of the Department of Housing and Urban Development (HUD), said on July 31 that Americans need to put down their differences, stop fighting, and work together to improve living conditions in Baltimore, Maryland.

Carson made the remarks during a visit to the city on July 31 following President Donald Trump’s criticism of Rep. Elijah Cummings (D-Md.) that underscored problems like squalid conditions and crime in the city.

“But there are problems and we can’t sweep them under the rug,” he added.

Carson, a surgeon at Johns Hopkins Hospital for 36 years, likened the city to a patient who has cancer.

“You can dress them up and put a nice suit on them and you can try to ignore it but that cancer is going to have a devastating effect. You have to be willing to address that issue if you’re ever going to solve it,” he said.

He said that when he was working as a pediatric neurosurgeon he spent hours and hours giving children a second chance at life but he was faced with a dilemma about whether to send some of the children back to their neighborhoods in East and West Baltimore “where there were rats, and roaches, and mice, and ticks, where there were just unabated lead problems that were having devastating effects on the mental development of young people.”

“That was a problem for me and that stayed on my mind a lot,” Carson said.

He said the press conference, which was supposed to be held on a church’s property, was moved because Carson and his team were told to move.

“When we’re talking about helping people. This is the level we have sunken to in society,” he said. “And it’s so important that we stop this—this madness.”

He said the president is very willing to work with people in Baltimore, including Cummings.

“The president’s emphasis is on the people. And that certainly is my emphasis,” he said.

He said that after he dropped out of the presidential race against Trump in 2016, he sat down with his former rival to talk about Americans who were living in poverty and what they could do about it. Trump later picked Carson to be his Housing secretary.

“You’ve seen some of the results—opportunity zones. There are 149 of them here in the state of Maryland,” Carson said. He also drew attention to the Trump administration’s achievements nationwide in manufacturing, wages, unemployment, and prison reform.

He said that in order to resolve the problems it depends on whether “we can focus on the right things—bring this kind of revitalization to our whole society, developing our people, providing what is necessary, and stop fighting each other … I think we can accomplish anything.”

Trump called out Cummings in a series of Twitter posts over the weekend after the Democrat shouted at federal immigration officials about the conditions on the southern border. Trump suggested Cummings focus on his own district, which he called “a disgusting, rat and rodent-infested mess.”

Throughout the week, Trump continued to target Cummings, blaming the congressman for the condition of his district and accusing him and other politicians of wasting and stealing billions of dollars sent to the city in federal aid.

Baltimore’s living conditions are now back under the spotlight. Trevor Loudon, a communism expert and contributor to The Epoch Times, said in a previous interview that Baltimore “has suffered from a succession of … of far-left leaders who have basically desolated their communities.”

“Then they have the gall to criticize a president who is trying to keep America as a first-world nation, not a third-world nation,” Loudon told The Epoch Times.

Loudon said Baltimore was once a thriving city but major riots in the 1960s drove a lot of Jewish businessmen out of the city.

“And you know this is a city in one of the richest parts of America. You know it’s not far from Washington D.C. It’s Maryland, Virginia, area which is generally pretty rich. But because of this democratic Marxist socialist patronage system that’s been there for 50 years now, the place is a sinkhole,” he added.