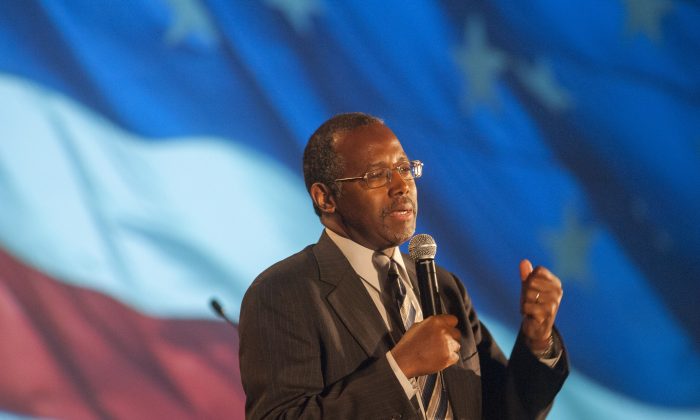 Dr. Ben Carson speaks as the keynote speaker at the Wake Up America gala Event September 5, 2014 at the Westin Kierland Resort in Scottsdale, Arizona. (Photo by Laura Segall/Getty Images)
Politics

Ben Carson, the retired neurosurgeon and author, says he will make his decision on whether to run for president in a few months.

Carson said on Newsmax TV on Friday that he’ll announce his decision before May 1.

“I would just say that I am listening extremely carefully,” said the Tea Party favorite. “I don’t want to do something that the American people do not want me to do.”

Carson explained that he’s studying the issues that a president must be familiar with, in much the same way that he’s studied medicine.

“You have to know a lot of stuff,” he said. “I’m rapidly acquiring that knowledge, listening to people and really finding a tremendous amount of frustration with the status quo, politics as usual, be it Republican or Democrat. Our system was designed for the people. It wasn’t designed for professional politicians. I’m thinking very seriously, listening to people and we’ll make a decision in a few months.”

Carson, 63, also emphasized that presidents do not have to be lifelong politicians, while noting that he’s installing the right people to work with him on subjects such as foreign policy.

Carson said earlier this year that “the chances are reasonably good” of him running for president.

“I want to make sure that it is clearly something my fellow Americans want me to do and I’m also waiting to see what the results are in November,” Carson told conservative talk radio host Hugh Hewitt on his program in September.

“If the people do indicate that they truly do want a nation that is for, of, and by the people then I along with what I hope will be many other people will be willing to give it everything we possibly have.”