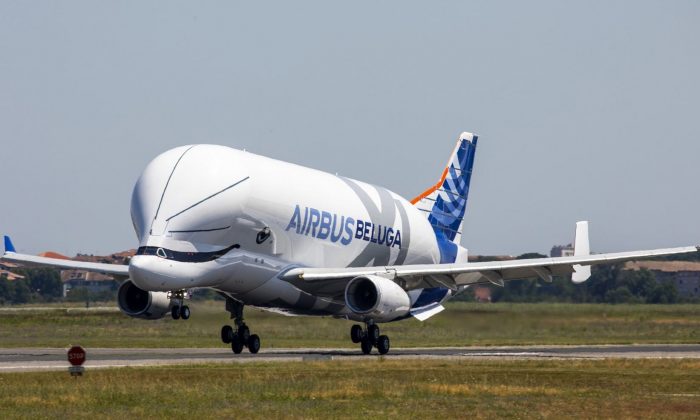 A stock photo of the Beluga XL plane (Airbus)
International

The Airbus Beluga XL, described by some as the “cutest” airplane, finally completed a key round of testing.

According to CNN last month, its testers carried out testing at Hawarden Airport in Wales.

The plane, however, isn’t available for passenger flights and will only be used to transport cargo.

The Beluga XL successfully completed its maiden flight in July 2018.

“Following the first flight, the BelugaXL will undergo some 600 hours of flight test over 10 months to achieve Type Certification and entry into service later in 2019,” Airbus said last year.

It added: “Based on an A330-200 Freighter, the BelugaXL is powered by Rolls Royce Trent 700 engines. The lowered cockpit, the cargo bay structure and the rear-end and tail were newly developed jointly with suppliers, giving the aircraft its distinctive look.”

Regarding the “cute” design of the plane, it was first called “the flying whale” due to its bulbous shape, CNN reported.

The face design was chosen after 20,000 Airbus employees were given six options and were asked to choose the best one. About 40 percent, the current face design was the winner.

“We used to say that in Toulouse or in Hamburg, the kids recognize the Beluga,” Bertrand George, head of the Beluga XL program, told CNN. “They love this very special plane.”

Officials, however, said the design is functional.

The cargo bay is gigantic and can carry two A350 wings at a time, whereas the old Beluga’s design could account for one.

“Flying in the air is a little bit like swimming in the sea,” George explained.

It's almost here.One of the aviation world's most hotly anticipated planes, the Airbus Beluga XL, has just completed a…

Posted by Aviation In Asia on Wednesday, 20 February 2019

Despite the plane’s odd appearance, he added, “for the pilots, this is really an A330. Our pilots will be trained on the A330 and then they will get a Delta qualification to enable them to fly the Beluga XL.”

“The drag is about the same,” he told the network. “What changes really is the behavior of the aircraft at the rear, at the bottom of the cargo bay.”

George continued: “This is why we have lifted the vertical tail plane by more than two meters to get it out of the flow behind the cargo bay and we have also the special acceleration on the horizontal tail plane to give stability to the aircraft.”

Airbus to Scrap A380 Production

Airbus is scrapping production of the A380 superjumbo, with lackluster sales forcing it to abandon a dream of dominating the skies with a 21st century cruiseliner, Reuters reported.

The world’s largest airliner, with two decks of spacious cabins and room for 544 people in standard layout, was designed to challenge Boeing’s legendary 747 but failed to take hold as airlines backed a new generation of smaller, more nimble jets. Confirming a shake-up first reported by Reuters, Airbus said on Feb. 14 the last A380 would be delivered in 2021.

The move comes after Emirates—the largest A380 customer—was forced to reduce its orders for the iconic superjumbo after an engine dispute and a broader fleet review, opting to order a total of 70 of the smaller A350 and A330neo instead. Without the anticipated level of demand from the Gulf heavyweight, Airbus said its assembly lines would dry up.

“This was a joint decision. We cannot run after illusions and we have to take the only sensible decision and stop this program,” Airbus Chief Executive Tom Enders said.