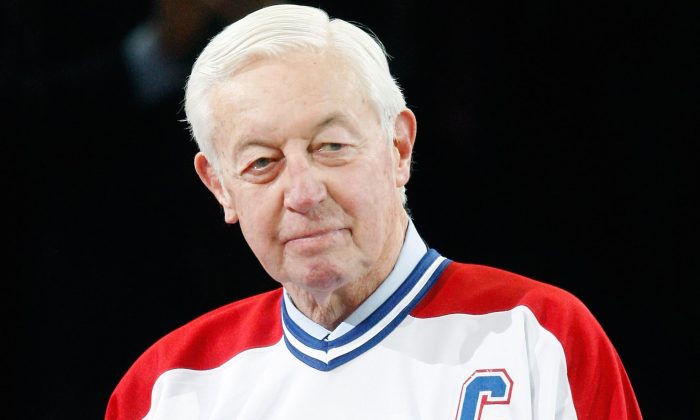 MONTREAL—It is hard to imagine a classier hockey player, on and off the ice, than Jean Béliveau.

A supremely skilled center for 18 seasons for the Montreal Canadiens, the 83-year-old Béliveau was also a gracious spokesman for the team and the sport.

The NHL club lost the legend on Tuesday who embodied all the attributes of their dynasty teams of the 1950s, 1960s and 1970s—talent, flair, intelligence, and success.

He scored 507 goals, won 10 Stanley Cups, and was captain for 10 seasons before his retirement in 1971, then moved seamlessly into an executive position with the club.

“Like millions of hockey fans who followed the life and the career of Jean Béliveau, the Canadiens today mourn the passing of a man whose contribution to the development of our sport and our society was unmeasurable,” team owner Geoff Molson said in a statement posted on the Canadiens’ website.

“Jean Béliveau was a great leader, a gentleman and arguably the greatest ambassador our game has ever known,” Molson added.

NHL commissioner Gary Bettman said hockey was “elevated forever by his character, his dignity and his class.”

“For all the accomplishments he achieved and all the accolades he received, Jean Béliveau was always the epitome of the boy whose only dream was to play for the Montreal Canadiens,” Bettman said in a statement. “Hockey is better because that dream was realized.”

Béliveau, the eldest of seven children, was born on Aug. 31, 1931, in Trois-Rivieres, Que., but moved to Victoriaville, a dairy centre southwest of Quebec City, when he was 3 years old.

He learned to control the puck on a crowded backyard rink and by the time he was a teenager, the Béliveau legend was growing.

When Victoriaville’s junior team folded, he moved to Quebec City and began filling rinks around the province. When he moved up to the senior Aces, he was said to be earning $20,000 in salary and endorsements on what officially was an amateur team.

Béliveau had short stints with the Canadiens two consecutive years before joining the club for good for the 1953-54 season.

His rookie season was spoiled by injuries. Although he rebounded with 37 goals as a sophomore, he was criticized for soft play and failing to retaliate to opponents’ cheap shots.

That all changed in his third season, 1955-56, when Béliveau decided to fight back. He led the team with 143 penalty minutes, led the NHL with 47 goals and 41 assists and took the first of his two Hart Trophies as the league’s most valuable player.

At 6’3″ and 205 pounds, Béliveau combined strength, a long reach, a soft touch on the puck, and remarkable vision on the ice to dominate the league.

In a 2011 interview, Béliveau said he would not have quite the same size advantage in today’s NHL.

Béliveau took over the captaincy in 1961 on a team rebuilding for another run of Cups under coach Hector (Toe) Blake.

After the 1969-70 season, in which an aging Béliveau had only 19 goals, general manager Sam Pollack talked his captain into playing one more season.

Béliveau scored 25 goals—including his milestone 500th—and added 22 points in 20 playoff games as the Canadiens won another Stanley Cup, allowing their big centre to retire, at 40, a winner.

When the Canadiens opened Centennial Plaza at the Bell Centre as part of the team’s 100th anniversary, their four greatest players were honoured with statues—Richard, Howie Morenz, Guy Lafleur, and Béliveau.

He and his wife Elise had one daughter, Helene, and granddaughters Mylene and Magalie.