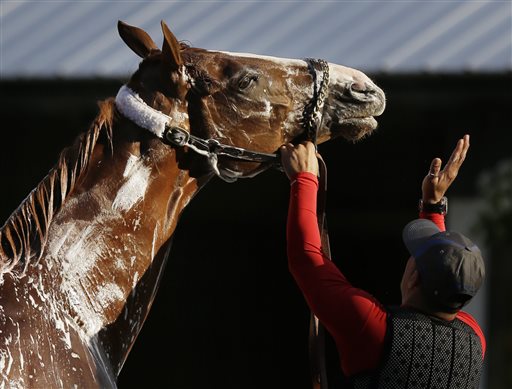 California Chrome is bathed after jogging around the track at Belmont Park in Elmont, N.Y., Wednesday, May 21, 2014. California Chrome arrived in New York on Tuesday to begin preparations for his bid to become horse racing's first Triple Crown winner in 36 years. (AP Photo/Seth Wenig)
Sports

The 2014 Belmont Stakes horse race is set for Saturday, June 7.

The race will be at Belmont Park Race Track in Elmont, New York.

The post time hasn’t been announced yet but it should be somewhere around 6:40 p.m. Coverage of the race will begin on NBC at 4:30 p.m. Post-race coverage will shift to Versus at 7 p.m.

Check out the updated odds and prop bets below, via Sportsbook.ag and Bovada.

2014 Belmont Stakes, Margin of Victory. Will it be two lengths or more?

Check out an Associated Press update below.

New shooter in Belmont mix to take on Chrome

NEW YORK—California Chrome has galloped again in preparations for the Belmont Stakes, while a new contender trained by Todd Pletcher has emerged for the last leg of the Triple Crown.

The colt ran two miles Monday, with assistant trainer Alan Sherman saying the Triple Crown hopeful is training well for the 1 ½-mile race June 7. No horse has swept the Kentucky Derby, Preakness and Belmont since 1978.

California Chrome is to have his lone official workout next weekend.

Pletcher says Matterhorn could run the Belmont. The colt was fourth in the Peter Pan on May 10 and was recently sold to new ownership. Pletcher already has a Belmont starter in Commissioner, runner-up in the Peter Pan.

Hall of Fame trainer Bill Mott says Matuszak is under consideration for the Belmont. The colt has just one win and is coming off a second-place finish in the Federico Tesio in Maryland.