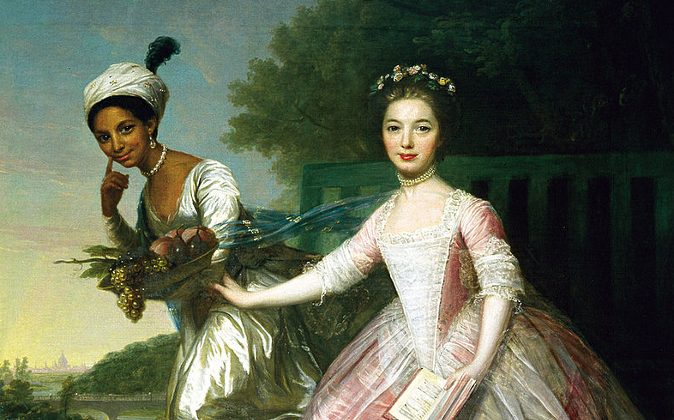 Belle is Fascinating, Just Don’t Compare It to 12 Years a Slave

Some reviewers have somewhat lazily compared Amma Asante’s recently opened film Belle to the Oscar-winning 12 Years a Slave, that other film about slavery. But this entirelydiminishes this film, which is an opulent and moving period piece set in 18th century London, starring the captivating Gugu Mbatha-Raw as the protagonist, Dido Elizabeth Belle.

Known then most commonly as Dido, she was a young, mixed-race girl, who was then the ward of the most prominent legal figure in Britain: Lord Mansfield. She was widely believed to have influenced some of the most crucial legal judgements of the Georgian era.

The film was partially inspired by a painting, once attributed to Johannes Zoffany, which for many years hung in Kenwood House, and now hangs in Scone Palace in Scotland. It depicts two young women, one black, one white: both beautiful. The portrait catches the eye because it is so anomalous for the day, when most paintings with a black subject are clearly servants, often posed looking up adoringly at their employer. This piece depicts the girls as equals. And it is perhaps Dido who comes off best, with her lavish robes and cheeky, beguiling smile.

Belle in the painting by Johann Zoffany. (Wikimedia)

Dido was the illegitimate daughter of aristocratic sea captain Sir John Lindsay and a slave woman known only as a Maria. In an almost unheard of case for that era, she was not only acknowledged by her father but financially protected by him; he beseeched his great uncle to provide her a home. As a result, the young girl ended up living in the perfumed splendour of Kenwood House, under the protection of her uncle, Judge Mansfield, the most prominent legal figure of his day.

The first of the cases she influenced was that of James Somerset in 1772. He was a slave rescued by the abolitionist Granville Sharpe from his vengeful master, who planned to sell him back into plantation slavery. This was a crucial case in a large issue because of the vast sum of money that the enslaved population both in Britain and in the colonies represented.

It was no wonder that anxious rumblings emerged from the planters and merchants when rumours circulated that the Judge was enthralled to his black niece Dido. And when Mansfield eventually ruled in favour of “the slave” Somerset, many felt their misgivings about her influence was entirely justified.

But it is the infamous Zong Case, in 1781, around which the legal drama of the film develops. This infamous case concerned merchants pitching 130 living slaves off a ship on the Atlantic Passage, in order to collect insurance monies. The sheer venality and inhumanity of the slave traders so disgusted the public that it would eventually help to ignite the abolition movement.

Mansfield is painted as the hero in the film, but in both cases it was the abolitionist Granville Sharpe who was the real champion, working tirelessly behind the scenes collecting evidence, and so forcing the reluctant Mansfield to make his historic judgements. So there is some artistic license at play here, but it doesn’t really matter because Belle’s story is fascinating even without the legal drama.

What the film wonderfully portrays is how despite the fondness of her ward, her classical education, her fluent French, her flawless piano playing; the adult Dido realises that the interplay of race, gender and class create a social maze that it is almost impossible for her to find her way through.

Nowhere was this more evident than in the Mansfield household itself. Her place in the household is utterly ambivalent: at one point she laments that she is “too high to dine with the servants and too low to sit with guests”. And this ambivalence only becomes more deadly when she reaches marriageable age. As the daughter of an aristocrat Dido should make a well placed marriage, but her race creates a dilemma that persists to this day: Britain still finds it hard to reconcile race and class.

In the fairy tale ending of the movie, Dido ends up marrying the son of a clergyman who is destined for the Bar. In reality, her life was not that straightforward. For the real Dido Belle, race really did determine her aristocratic destiny, and she ended up marrying a servant, albeit a white, French one.

I’m not sure I mind this dalliance away from history. It’s wonderful to see a black British actress dominate a full length feature film; and even more wonderful to see British film-making exploring Britain’s slave stories rather than simply being smug about American ones.

Ultimately Belle is a winning formula. It combines some of our favourite genres: a costume drama, replete with the marital wrangling that we so love in Jane Austen; and the pathos and drama of the legal saga.

Belle is somewhat optimistic in its treatment of the slave trade in that it focuses on Britain’s role in ending it, rather than its role in creating it, but this too is something that can be forgiven. The very fact that Belle takes on the silence about the black presence in Britain before the 20th century means the film should only be applauded.

Article was originally published at The Conversation.