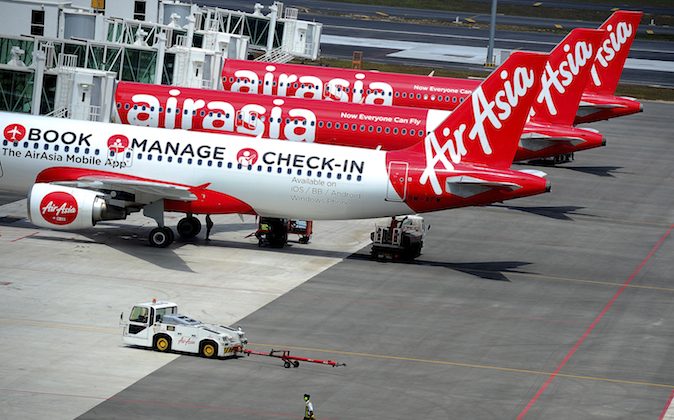 A ground crew man walks past a fleet of AirAsia's passenger jets on the tarmac of the new low cost terminal KLIA2 in Sepang, Malaysia, Friday, May 9, 2014. AirAsia on Friday began its full operations from KLIA2. (AP Photo/Joshua Paul)
AirAsia Disaster

Indonesian media reports on Sunday say a plane has crashed off waters near East  Belitung. However, there has been no confirmation that the plane crashed or the wreckage has been found.

A National Search and Rescue Agency (Basarnas) told the Jakarta Post that the AirAsia plane is downed in Belitung waters at 03.22.46 South and 108.50.07 East. It’s located about 145 km from Belitung island.

A spokesperson for the agency told the Post that it dispatched a search and rescue team to Belitung.

According to the Malaysian Insider on Sunday:

An aircraft has reportedly crashed in the waters off East Belitung, off the east coast of Sumatra, after authorities confirmed that AirAsia Flight QZ8501 went missing earlier today.

The Bangka Pos news portal said there was no confirmation of the crash site.

READ MORE: Was 2014 the Worst Year for Air Crashes?

As the Insider reported, the Bangka Pos said that “authorities received information that the location is at Babel coast, but the exact place was still unknown.”

“We are still coordinating and gathering information from the fishermen and the ships passing through the Beltim coast,” AKP Yanto told Bangka Pos.

According to a Google Translate of the Bangka Pos article, it said an “Airbus reportedly crashed in the waters of East Belitung.” The headline says the “AirAsia Airbus” was the plane.

#QZ8501 #airasia reported missing in the marked area. The Island of Belitung is directly between Surabaya & Singapore pic.twitter.com/E25PfqcjDI

@sedvitae QZ8501 would probably have been close to the Bangka Belitung Islands when it lost contact. pic.twitter.com/FkmvOx1yZr

AirAsia said in a statement that the plane was an Airbus A320-200 and that search and rescue operations were in progress.

The plane had six crew and 155 passengers, including 16 children and one infant, the general manager of Surabaya’s Juanda airport, Trikora Raharjo, told The Associated Press.

There were six foreigners — three South Koreans including an infant and one each from Singapore, British and Malaysia, said Raharjo. The rest were Indonesians, he said.

The plane lost contact when it was believed to be over the Java Sea between Kalimantan and Java islands, Mustofa said.

He said the weather in the area was cloudy.

The Singapore aviation authority said it was informed about the missing plane by Jakarta ground control about half an hour after the contact was lost.

“Search and rescue operations have been activated by the Indonesian authorities,” it said, adding that the Singapore air force and the navy also were activated with two C-130 planes.

AirAsia Indonesia regrets to confirm that flight QZ8501 from Surabaya to Singapore has lost contact with air traffic control at 07:24hrs this morning.

At the present time we unfortunately have no further information regarding the status of the passengers and crew members on board, but we will keep all parties informed as more information becomes available.

The aircraft was an Airbus A320-200 with the registration number PK-AXC.

At this time, search and rescue operations are in progress and AirAsia is cooperating fully and assisting the rescue service.

AirAsia has established an Emergency Call Centre that is available for family or friends of those who may have been on board the aircraft. The number is: +622129850801.

AirAsia will release further information as soon as it becomes available. Updated information will also be posted on the AirAsia website, www.airasia.com.

Search and rescue operations have been activated by the Indonesian authorities from the Pangkal Pinang Search and Rescue office.

The Singapore Rescue Coordination Centre (RCC), managed by the Civil Aviation Authority of Singapore (CAAS) and supported by various agencies, including the Republic of Singapore Air Force (RSAF) and the Republic of Singapore Navy (RSN), has also been activated and has offered help to the Indonesian authorities. Two C130s are already on stand-by for this purpose. We remain ready to provide any assistance to support the search and rescue effort.

The CAAS and Changi Airport Group (CAG) Crisis Management Centres have already been activated. We are working with the airline’s crisis management team.

A waiting area, and all necessary facilities and support have been set up for relatives and friends of the affected passengers at Changi Airport Terminal 2 (Level 3).

Further updates will be provided once more information is available.