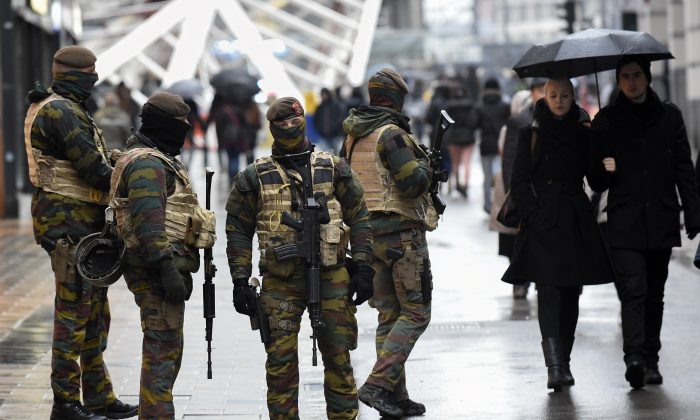 Soldiers patrol the Rue Neuve pedestrian shopping street in Brussels on November 21, 2015. All metro train stations in Brussels will be closed on November 21, the city's public transport network said after Belgium raised the capital's terror alert to the highest level, warning of an "imminent threat." (AFP/Getty Images)
Europe

Belgian officials extended a top threat alert for Brussels to Monday, Nov. 23, amid reports that the Grote Markt and the location’s Radisson Blu were closed due to police activity. Shops were also urged to close due to a police operation, according to local reports. Later, the Rue du Midi was shuttered amid police activity.

A soldier just told our #c4news producer ‘no one outside there is a real threat of attack”…. pic.twitter.com/DE2zBbRQ2P

“There is no imminent threat, but we want our guests to keep as safe as possible,” Radisson Blu said, according to Dutch-language publication DeMorgen.

Meanwhile, a soldier told a news producer: “No one should remain outside, as there is a real threat or attack.”

Guests can enter the Radisson but are not allowed to leave, according to Channel 4 News journalist Stuart Webb.

A report from Het Nieuwsblad said guests at the hotel are urged to keep their windows closed.

The police activity comes as Belgian officials said it is facing a serious and imminent threat of a Paris-style attack, more than a week after several suicide bombers and gunmen killed more than 130 people in France’s capital city.

Security forces are searching for Islamic State, or ISIS, militants that are believed to be at large in Brussels, Reuters reported.

Police and military ask us to stay in the hotel #Brussels pic.twitter.com/KX7wZnOzCs

“What we fear is an attack similar to the one in Paris, with several individuals who could possibly launch several attacks at the same time in multiple locations,” Michel said, according to Reuters.

Belgium has been at the center of investigations into the attacks in Paris on Nov. 13 after links to Brussels emerged.

“It is a threat that goes beyond just that one person,” Interior Minister Jan Jambon told broadcaster VRT, per Reuters. He was referring to Salah Abdeslam, one of the suspects in the Paris case.

He added: “We’re looking at more things, that’s why we’ve put in place such a concentration of resources.” He said that the “terror threat in Belgium would not be over once Salah Abdeslam is out of harm’s way,” reported the BBC.

Explaining the terror alert on Saturday, Vice Prime Minister Dider Reynders said authorities are looking for at least one person with weapons or explosives.

“The threat is imminent, precise, we’re talking about possible attacks by several individuals, heavily armed, so obviously in parallel we are looking for one and more individuals with weapons, explosives,” Reynders said on Belgian television station RTL, reported ABC News.

Belgian media report police have blocked off Rue du Midi area and looking for at least one terrorist. pic.twitter.com/S6BGayEVOW

“An investigation is ongoing and we can’t say more, we must avoid disrupting it,” he noted. “What I can say is that there’s a real threat and that’s why we raised the level to 4, and why we’ve taken security measures. Investigators are looking for individuals who have the capability of committing such attacks.”

The alert was raised to a level 4 in the Brussels region, while the rest of the country is at a level 3.

NATO also said it raised the security level at its Brussels headquarters following the attacks in Paris.

“We remain vigilant and are taking all necessary measures to ensure the security of our staff and premises,” NATO said.