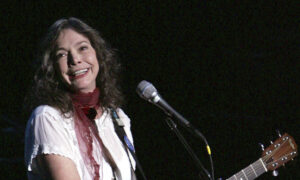 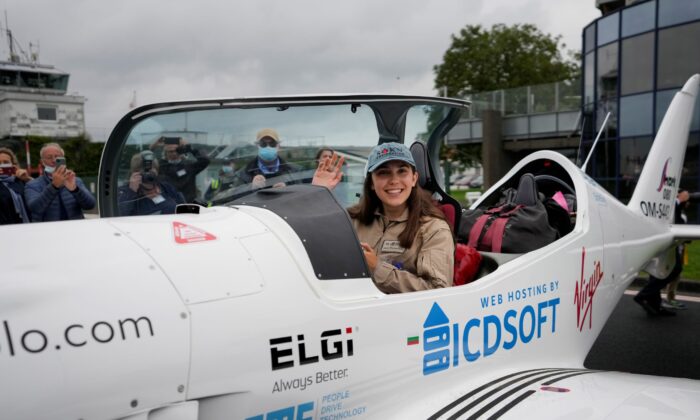 Belgian-British teenager Zara Rutherford waves from her Shark Ultralight airplane prior to take off at the Kortrijk-Wevelgem airfield in Wevelgem, Belgium, on Aug. 18, 2021. (Virginia Mayo/AP Photo)
Europe

KORTRIJK, Belgium—A Belgian-British teenager took to the skies Wednesday in her quest to become the youngest woman to fly around the world solo.

With her parents looking on, 19-year-old Zara Rutherford took off from an airstrip in Kortrijk, western Belgium in gusty, overcast conditions. Rutherford is aiming to break the record set by American aviator Shaesta Waiz, who was 30 when she set the world benchmark in 2017.

By narrowing the gap from 12 years to just one, she hopes to show other young women and girls that the sky’s the limit when it comes to making their own mark on the history of aviation. Rutherford aims to fly her fast and light Shark sport aircraft over five continents and 52 countries in an aerial trek that’s likely to take 2 to 3 months.

“I am very nervous, I think. I am also in a bit of disbelief. I think my next step is to check the weather again,” she told The Associated Press before takeoff. “Normally, I am reaching Scotland tonight. I am not sure that will work. But I will try my best, while staying safe, of course,”

Rutherford hails from a family of pilots. She’s been traveling in small planes since the age of 6, began jumping out of them—with a parachute—at 11, and then started flying herself at 14. She’s logged about 130 hours of solo flights.

She said she wants to inspire girls and young women to get into aviation and encourage them to study science, technology, engineering, and mathematics; also known as STEM.

“This is her dream. It’s what she wants to do,” Rutherford’s father, Sam, said. “I am very, very proud that she wants to try and attract more young women and girls into STEM and aviation. Because 5 percent of pilots in the world are women. That’s really not a statistic in which we should be proud.”

Rutherford’s plane was specially fitted out for the journey. It’s normally a two-seater, but an extra fuel tank now takes up one of them. That will also help erase any doubts about whether she’s flying alone.

The Shark is too small for long-distance flying over the Atlantic and Pacific oceans. For the crossing over the Atlantic, Rutherford plans to fly up through Europe and over Greenland. She’ll head down through the United States, then back up to Alaska to cross the Pacific. From there, she’ll head across Asia back to Europe.

Mental fatigue and loneliness on such long-distance flights can be a big challenge.

“These are things I am keeping in mind. I will also be on the phone with my parents often and just friends and family,” Rutherford said. ”Sadly, I cannot watch movies. But I have music lined up, I have podcasts lined up. So hopefully, that should keep me busy whilst I am up in the air for five, six hours at a time.”

The men’s record for a solo round the world flight is held by 18-year-old Travis Ludlow of Britain.