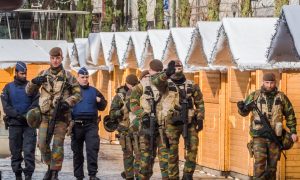 Brussels to Stay on Highest Threat Alert Into Monday
0 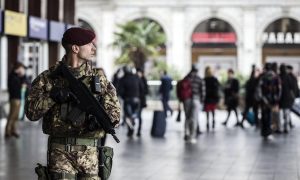 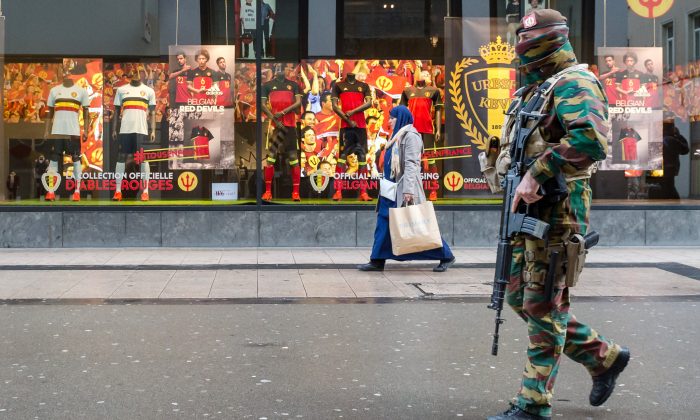 A Belgian Army soldier patrols in a shopping street in the center of Brussels on Wednesday, Nov. 25, 2015. Students in Brussels have begun returning to class after a two-day shutdown over fears that a series of simultaneous attacks could be launched around the Belgian capital. Underground transport in Brussels is also slowly starting up again after a four-day closure. (AP Photo/Geert Vanden Wijngaert)
Europe

BRUSSELS—As police armed with automatic weapons stood guard, schools and some subway stations in the Belgian capital reopened Wednesday for the first time since emergency measures were imposed four days ago in the wake of the Paris attacks.

Belgian and French authorities continued a manhunt for at least two suspects believed to be directly linked to the killings in Paris, while France’s lower house of parliament voted overwhelmingly, by 515 votes in favor to four against, to continue airstrikes against Islamic State group targets in Syria beyond early January.

Parliament’s upper house, the Senate, was expected to vote on the measure later Wednesday.

The IS group claimed responsibility for the Nov. 13 attacks, which killed 130 people and wounded hundreds more in Paris.

About half of all subway stations in Brussels were operating for the first time since the weekend. Despite the easing of restrictions, Brussels—home to the European Union and NATO headquarters—remained under the highest alert level due to what authorities have described as a serious and imminent threat of attack. Emergency measures had shut down shops, schools and subways in the city since Saturday.

The threat alert level is expected to remain at that level until at least Monday, barring a major development such as the arrest of suspects in the Paris attacks. The Belgian government has also ordered health and emergency services to take precautionary measures to ensure their services aren’t infiltrated by extremists.

“We have to be sure that we can see everybody has an identification badge,” Health Minister Maggie De Block told VRT network. “When ambulances arrive, we have to see from where they come, who is in it. Really as a precaution.”

Belgian Interior Minister Jan Jambon said raids carried out Sunday night had been designed to foil an imminent attack in Brussels. Authorities detained 16 people, but released all but one of them the following day. No explosives or firearms were seized.

“There were indications that there would be attacks on Sunday evening and they did not materialize,” Jambon said, adding that otherwise “you don’t impose terror level 4,” the highest possible.

The minister refused to elaborate what kind of attacks the government believed had been planned.

The reopening of schools and some subway stations restored a sense of normality to Brussels, parts of which have been deserted for days.

At Brussels’ College Saint-Jean-Berchmans, some parents gave their children a quick kiss before dropping them off, while several police officers guarded the entrance, including one with a machine gun. Among the students at the school is Belgium’s Princess Eleonore.

Some children looked visibly worried as they arrived, but most gave a friendly handshake to a burly school official guarding the entrance alongside the police officers.

Authorities in France and Belgium have issued public appeals for help in tracking down two men believed to be directly linked to the Paris attacks. Belgium on Tuesday issued an international arrest warrant for Mohamed Abrini, described as “armed and dangerous” after he was seen with Salah Abdeslam, the other fugitive suspect, two days before the killings on a highway gas station en route to Paris.

Abrini and Abdeslam were picked up on the surveillance video of a gasoline station in Ressons. Abdeslam, who French authorities have suggested could have been linked to a discarded suicide vest found Monday in a southern Paris neighborhood, crossed into Belgium the day after the attacks. Although he was stopped and checked by French authorities, he was allowed to pass as his name had not yet become known.

One of Abdeslam’s brothers, Brahim, blew himself up outside a Paris cafe during the attacks. His other brother, Mohamed, appealed on French media on Wednesday for his fugitive sibling to surrender to police.

Speaking on RTL radio, Mohamed Abdeslam said he shares the pain of victims’ families and wishes he and his family could have done something to prevent the Nov. 13 bloodshed.

“Let him turn himself in for his parents, for justice, for the families of victims, so that we can find out what happened,” Mohamed Abdeslam said.

He said his brothers had shown no signs of radicalization. Mohamed Abdeslam said he saw them a few days before they left their Brussels suburb for Paris, but had no idea what they were plotting, and hasn’t heard from Salah since.

Emergency measures have also been taken in France while the manhunt continues.

Cazeneuve said 120,000 police, gendarmes and soldiers were being deployed across France to ensure the country’s security.

The attacks have also taken a financial toll in France, with restaurants, small shops, department stores, hotels and tourist sites affected. The government said after a Cabinet meeting Wednesday that businesses that had suffered a financial hit could get extensions on tax and loan payments as a means of softening the blow. The government was also to create a special fund for theaters.

Government spokesman Stephane Le Foll said Wednesday he couldn’t confirm an RTL radio report that the state treasury estimates the cost of the attacks at 2 billion euros ($2.1 billion), though he said it “might” be right.

France is among the world’s top tourist destinations. Several museums in Paris closed in the days after the attacks.