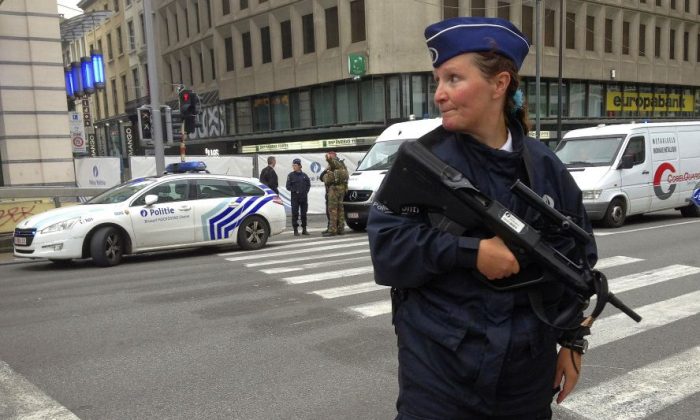 An armed police officer stands guard near a blocked off street in downtown Brussels Tuesday June 21, 2016 after Belgian authorities took a man into custody following a pre-dawn security alert at a major shopping center. The security operation followed an alert about a suspicious package. (AP Photo/Virginia Mayo)
Europe

Suspicious with heavy coat, has 'wires coming out'
By The Associated Press

BRUSSELS  — Belgian police have isolated and are guarding a suspicious man in a heavy coat with wires hanging out because of fears that he might pose a danger in the center of Brussels.

Several hours after police were alerted to the man, he was still being kept under armed police guard near a library adjacent to Royal Monnaie Opera. The demining squad was close by in case an intervention was necessary.

Belgium has been living under the second-highest terror threat level since November. Brussels, the capital, was hit by twin extremist attacks on March 22 that killed 32 victims.

Due to the Bastille Day attack in Nice that left 84 people dead last week, security in Brussels was already increased for Thursday’s independence day celebrations.

“We got a call about someone acting suspiciously. Someone with a heavy winter coat—in these temperatures it’s very suspicious,” Christian De Coninck of Brussels police told Belgian TV, according to the BBC. “And there were wires coming out of the coat too. We didn’t take any risks. The person was stopped and kept at a distance.”

“We are now waiting for more information from the bomb disposal unit which is at the scene now and then we’ll know more,” he added, according to The Telegraph.