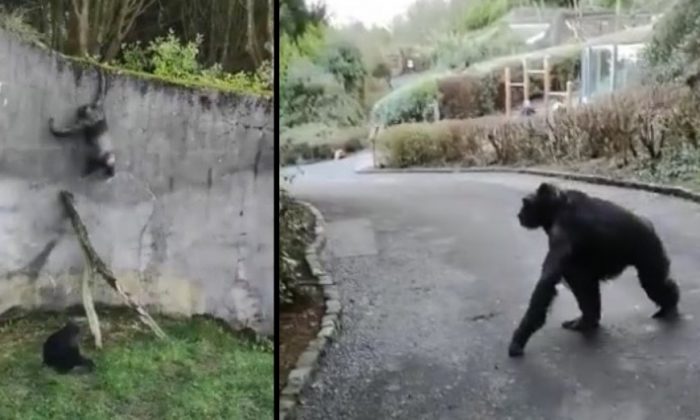 Four chimpanzees escaped their enclosure and roamed freely throughout the zoo in Belfast, Northern Ireland, on Feb. 9, 2019. (Dean McFaul via Storyful)
Europe

Chimpanzees at a zoo in Northern Ireland roamed free after escaping their enclosure with the help of a branch.

Belfast Zoo officials told BBC that the chimpanzees made an improvised ladder from a large tree branch that was propped up against a wall.

A visitor to Belfast zoo caught the breakout on camera on Saturday, Feb. 9, as the unruly animals took advantage of damage caused by stormy weather to make a break for it.

The chimps can be seen in a video posted to Facebook climbing a tree branch that had conveniently fallen against the enclosure wall, before jumping and catching the lip of the concrete wall.

A child is heard in the video exclaiming, “Don’t escape you bad little gorilla!” as video shows several chimpanzees walking along the top of the wall.

A second clip, posted on Facebook by Danielle Monaghan, shows one of the animals scampering down an embankment and roaming freely near an internal road.

The voice of a terrified child can be heard exclaiming “My God!”

A female voice tries to console the child, saying “It’s ok,” while a male voice yells towards the ape “Go back!”

But the chimp ignored their commands and sauntered across the road.

When the ape reached the other side and sat down on the curb, the male voice called out, “Stay there, then!”

Families recounted their shock to BBC reporters at witnessing the animals’ escape.

Chantal Baxter said “one of the big chimpanzees just appeared from behind a bush” on Saturday afternoon.

Monaghan told reporters she was “petrified” the chimp might “attack or take the kids.”

But the mother of two said the animal was “not aggressive” and “just watched.”

Monaghan—who was at the zoo with her two children—called the incident something she would “never forget.”

She said she and her companions “could not believe it” when the “smart” chimpanzees started to climb onto the branch and hopped over the wall.

She said they went to take a closer look and ended up “a foot” away from one of the chimps.

“I was petrified, obviously, having the kids and I tried not to show fear but inside I was a bit like what happens if it attacks us or tries to take the kids or runs over,” she told BBC.

“But we just had to stay calm.

“It may have been a different story if it had been aggressive but it absolutely wasn’t. It made us feel at ease. We just walked past it and it was absolutely grand.”

Four animals made the escape, according to an eyewitness who spoke to the BBC.

The zoo’s Alyn Cairns was cited by the BBC as saying, “We think what has happened is that the trees in their enclosure have been weakened by the storms and so they’ve been able to break them and use them as a ladder to get out.”

Cairns added that the zoo’s chimpanzees were “quite cowardly” and after some time headed back into the safety of their enclosure all on their own.

“They’re intelligent primates and know they’re not supposed to be out of their enclosure, so got back in themselves,” he said, according to the report.

He said the zoo would conduct a safety review and possibly remove some of the trees, whose limbs might facilitate future breakouts.

“We like things to be natural in their enclosure, to have trees in it, but we will review it.

“We may have to remove the trees or make them a smaller level, although we don’t want to do that.”

He added that once they were safely contained, the chimps were locked into an inner enclosure.

The chimpanzee escape came after a red panda cub called Amber escaped from its enclosure at Belfast zoo last month and was found in a nearby garden.

“We are pleased to report that Amber has been safely returned to Belfast Zoo after a short time exploring the local area,” said the zoo’s manager, Alyn Cairns, BBC reported.

Red pandas are an endangered species slightly larger than a domestic cat.

“We would like to thank all of those involved in the search for our missing red panda,” Cairns said at the time.

Amber’s escape was attributed to a problem with the fence.

The zoo’s manager told the BBC that staff had discovered “a power fault” in an electric fence used to prevent the red pandas from escaping.

“Our maintenance team were informed at the earliest opportunity and the fence has since been repaired,” Cairns said.