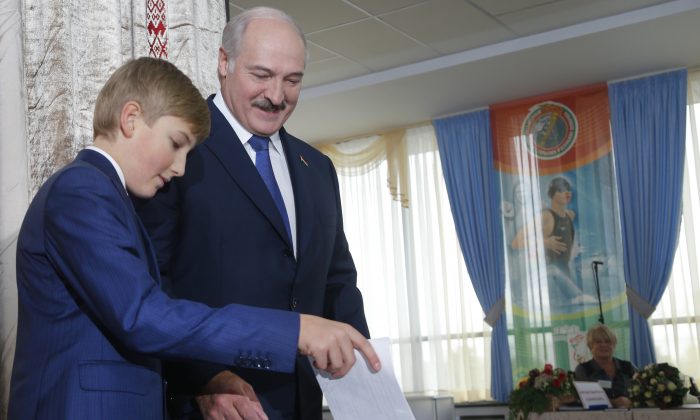 Belarusian President Alexander Lukashenko with his youngest son Nikolai casts his ballot at a polling station, during the presidential election, in Minsk, Belarus, Sunday, Oct. 11, 2015. A presidential election was under way Sunday in Belarus, where authoritarian leader Alexander Lukashenko faced no serious competition and was expected easily to win a fifth term. The opposition called for a boycott of the vote. (AP Photo/Sergei Grits)
Europe

MINSK, Belarus— President Alexander Lukashenko was set to win a fifth term in Sunday’s election with ease, but he said anything less than 80 percent of the vote would be a sign that his support was slipping. Both the official exit polls and the chief election official later predicted he would get even more.

The authoritarian leader faced no serious competition in the election, which was boycotted by the opposition.

About 100 opposition supporters held a protest march after polls closed to show their discontentment, but the demonstration ended peacefully.

“Lukashenko himself set the election, set his competitors and set the percent that he would receive,” said Maxim Venyarsky, 34, who was among the protesters.

While no reliable independent exit polls were conducted, the state sociology institute said its survey suggested Lukashenko would get 83 percent of the vote.

Lidia Yermoshina, the head of the Central Election Commission, said results from voting in hospitals and on military bases, even though they represented only 1 percent of voters, already showed his overwhelming win.

“These data give the idea, the picture and tendency of the whole society: 89 percent voted for Alexander Lukashenko,” she announced as soon as polls closed.

Even before polls opened in the former Soviet republic, the Central Election Commission announced that 36 percent of the 7 million registered voters had cast their ballots during five days of early voting. By 6 p.m. (1500 GMT) on election day, the official turnout stood at 82 percent, although many polling stations in the capital and nearby villages were nearly empty during the day.

“It is very unusual for us to find that a country has an election so many days,” James Walsh, who heads the delegation from the Organization for Security and Cooperation in Europe’s Parliamentary Assembly, told The Associated Press. “Most democracies have a challenge in getting its citizens … to come out and vote.”

Walsh said the observers have questions about the security of the ballot boxes, an issue also raised by the opposition.

“For five nights, no one was guarding the ballot boxes and the authorities could do anything they liked with them,” said Anatoly Lebedko, the leader of the opposition United Civil Party.

Lukashenko said it would be a bad sign if he received fewer votes than during the last election in 2010, when he won 79.65 percent.

“That would mean that people were beginning to move away and were dissatisfied with some of my policies,” the president said after voting in Minsk, the Belarusian capital. “Therefore for me it is very important: If Lukashenko wins, that I retain what was there in the past election.”

Lukashenko, 61, appeared at the polling station with his 11-year-old son, Nikolai, who was wearing the same suit and tie as his father.

An independent institute of socio-economic and political research put Lukashenko’s support at about 46 percent in September, while the official state sociology institute tallied his support at 76 percent.

Lukashenko faced three nominal rivals in the election: the leaders of two pro-government parties, Sergei Gaidukevich and Nikolai Ulakhovich, and little known opposition activist Tatyana Korotkevich. Prominent opposition figures either were barred from running or decided against trying to get on the ballot for an election they considered a farce.

Svetlana Alexievich, a Belarusian writer who was awarded the Nobel Literature Prize last week, was among those critical of the election.

During his 21 years of rule, Lukashenko has cracked down on dissent while cultivating an image of a strong leader capable of guaranteeing order and stability.

“Oh, life has become harder, but Lukashenko promises stability and peace,” said 68-year-old Tamara Krylovich after voting in Minsk. “Look at what democracy brought in Ukraine — war and poverty.”

Lukashenko has largely preserved the state-controlled Soviet type of economy, albeit with the help of cheap Russian gas and Western loans. The unreformed economy may be sputtering, but it still puts bread on the tables of pensioners and workers at unprofitable state factories.

But Anton Gurevich, a 41-year-old automobile factory worker, said it was time for a change.

“I have lived half of my life with Lukashenko, but life has not gotten better,” he said. “After all, the leadership should change, there should be changes.”

Lukashenko said he was prepared to introduce economic reforms if the Belarusian people were prepared for the difficulties they would bring.

“If you give me carte blanche for any destruction and any revolutionary transformations, if that is what you want, then for God’s sake we will do it,” he said. “The issue is not me, the issue is society.”

Lukashenko had allowed opposition candidates to run in past presidential elections, although none of the votes was recognized in the West as free or fair.

In 2010, most of the candidates who opposed him were arrested soon after the polls closed. Police also detained hundreds of opposition supporters while violently dispersing an election night protest that drew tens of thousands onto the street.

One of the former candidates, Nikolai Statkevich, spent nearly five years in prison until Lukashenko unexpectedly pardoned him in August along with all five other remaining political prisoners. Their release was seen as an effort to improve relations with the West, which imposed sanctions on Belarus in response to the crackdown on dissent.

On Friday, a European Union official said the EU may suspend its sanctions on Belarus.

“This was a special operation by Lukashenko to retain power,” Statkevich said late Sunday. “This was not an election.”