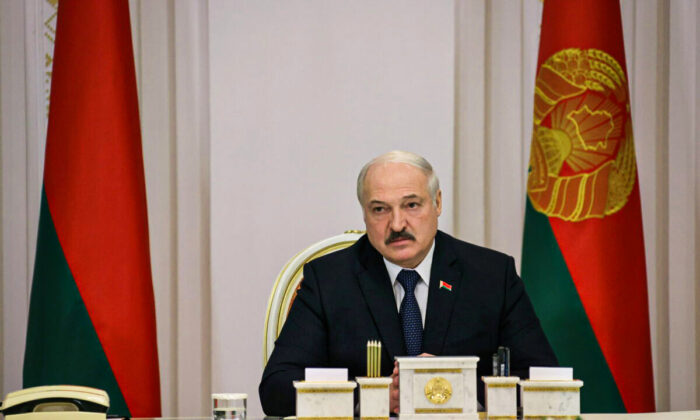 Belarusian president, Aleksandr Lukashenko, allegedly agreed to negotiate with the European Union about how to solve the illegal immigration crisis at the Belarusian–Polish border.

Lukashenko, in a phone conversation with Germany’s acting Chancellor Angela Merkel, on Monday, agreed that Belarus would negotiate with the EU a solution to the border crisis, according to Belarusian press agency Belta.

“The Belarusian president and Germany’s acting chancellor agreed that the problem will be addressed at the level of Belarus and the EU and that the two sides will designate officials who will immediately enter into negotiations in order to resolve the existing problems. The desire of refugees to get to Germany will be addressed in the same context,” said the press service of the Belarusian leader.

The regime in Belarus has brought about “a dramatic and very worrying situation, from a humanitarian point of view,” in which thousands of people are suffering, said Steffen Seibert, German Chancellor Angela Merkel’s spokesman.

“We know that the regime in Belarus has brought about this situation, that it bears responsibility for it,” Seibert said on Wednesday at a press briefing.

“To find humanitarian ways out,” Merkel, a leader of a European Union member state had spoken with Lukashenko despite the fact that the EU does not recognize him as a legitimate leader of Belarus, Seibert explained.

The EU denied Lukashenko’s presidency any legitimacy after he claimed victory in the presidential elections in Belarus in August 2020, which results the EU considered falsified.

“[Merkel] made this phone call in close coordination with the European Commission, and after prior information of important partners, especially in the region,” Seibert said.

“The road to Belarus is a dead end for most people who want to go to Germany. There are no plans to approve taking people in,” Seibert stated.

Seibert said on Twitter that during the conversation, Merkel stressed the need for humanitarian aid and repatriation facilities to be organized by the U.N. and EU to help the affected people, reported DW (Deutsche Welle)

German Interior Minister Horst Seehofer also said on Thursday that Germany will not take in refugees stranded on the Belarus–Polish border.

“If we took in refugees, if we bowed to the pressure, we [take] refugees into European countries, then this would mean implementing the very basis of this perfidious strategy,” Seehofer said during a news conference in Warsaw after talks with his Polish counterpart.

“The Poles are not only following their own interests, they are also acting in the interests of the whole European Union,” Seehofer added.

Germany, the EU’s wealthiest economy, is believed to be the preferred destination of many illegal immigrants.

The situation has continued to escalate. Polish forces at the border used water cannons and tear gas Tuesday against stone-throwing migrants, as Warsaw accused Belarusian authorities of giving smoke grenades and other weapons to those trying to cross the frontier.

Belarus authorities on Thursday cleared the main camps where migrants had huddled at the border, in what appeared to be a major development in the border crisis.

Large numbers of immigrants trying to illegally cross the Belarusian–Polish border came from Iraq and the Kurdistan Region.

Al-Kadhimi promised to bring Iraqi citizens back to their country including those who illegally crossed the Polish border and are being held at “the accommodation centers in Poland.”

Barzani also offered his cooperation and stressed that people who went to the EU borders are victims of smugglers and organized criminal groups.

Morawiecki stated that Poland offered humanitarian aid to immigrants many times, but the Belarusian authorities denied humanitarian transports entry into the country.

According to Belta, Lukashenko denied the allegation that Belarus blocks the delivery of humanitarian aid to refugees. If Poland removes the barbed wire at the border, they would be able to come to refugees with humanitarian aid, the Belarusian leader said.

In a joint statement, the G7 foreign ministers of Canada, France, Germany, Italy, Japan, the United Kingdom, and the United States, and the top diplomat of the European Union condemned the Belarus regime for organizing illegal immigration across its borders.

The ministers expressed their solidarity with Poland, Lithuania, and Latvia calling on the Belarusian regime “to cease immediately its aggressive and exploitative campaign in order to prevent further deaths and suffering.”

Thousands of illegal immigrants have traveled to Belarus in the hope of crossing into the EU country, only to find themselves trapped on the border in freezing conditions.

European leaders accuse Belarus of mounting “a hybrid attack” by flying in migrants from countries like Syria and Afghanistan and pushing them to cross illegally into EU member Poland. Minsk has repeatedly denied the accusation.