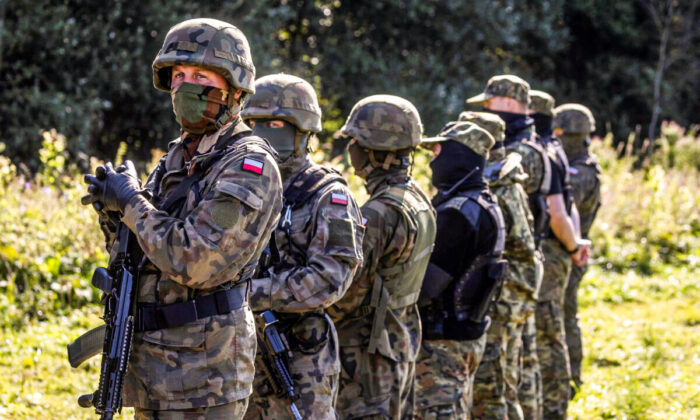 “Yesterday there was another provocation against Polish soldiers protecting the border,” the Polish Ministry of Defense (MOD) said.

“The Polish soldiers located a group of around 250 migrants near the fence,” it explained. “The Belarusian soldiers guarding them threatened to open fire at our soldiers.”

The MOD noted that Polish troops did not allow themselves to be provoked and as a result, the situation did not escalate further.

“The actions of the Belarusian soldiers looked like an attempt to escalate the situation, but they were also an attempt to hide the fact that a group of migrants had crossed into Polish territory,” it wrote.

Wednesday’s incident was, according to the MOD, yet another confirmation of Belarusians getting involved in pushing illegal immigrants across the Polish-Belarusian border.

The European Union and Warsaw have accused Belarus of deliberately encouraging illegal immigrants to enter Poland and other EU states via Belarusian territory as a means to put pressure on the bloc over sanctions. Belarus has repeatedly denied these accusations.

Polish authorities have repeatedly said the situation along the border is “in crisis” as the nation declared a state of emergency last month in several areas along the country’s border with Belarus while also announcing plans to spend more than $400 million on improving its border defense by building a solid barrier.

The number of Polish troops sent to border regions in order to stem the flow of illegal immigrants has also increased by thousands over the last month.

Mariusz Blaszczak, the country’s national defense minister, said on Oct. 25 that soon, “10,000 soldiers from the 12th, 16th, and 18th divisions will be watching over the security of the border.”

Poland’s foreign ministry in a Nov. 3 statement said that Polish border officials spotted “unidentified uniformed individuals armed with long guns” on Nov. 2 in an earlier alleged intrusion. Upon attempting to make contact, the armed individuals reloaded their weapons and then ran back towards Belarusian territory, The First News reported.

The incident was followed by a formal protest to Belarus. Poland said it had summoned the Belarusian charge d’affaires to protest over what it said was “a deliberate escalation” of the migration crisis.

“Deputy Foreign Minister Piotr Wawrzyk forwarded an emphatic protest to the Belarusian side against the violation of Polish state border, emphasizing that the actions taken by the Belarusian authorities in recent weeks have the increasingly evident hallmarks of a deliberate escalation,” it said.

The Belarusian foreign ministry has denied the accusations, saying Polish authorities have not presented any proof or documentation about the alleged event.

“Belarus has never provoked and does not intend to provoke border incidents. … Artificial operetta performances, organized with the aim of creating a hostile image of Belarus in international public opinion, contradict not only international law, but also all conceivable moral norms,” it said.