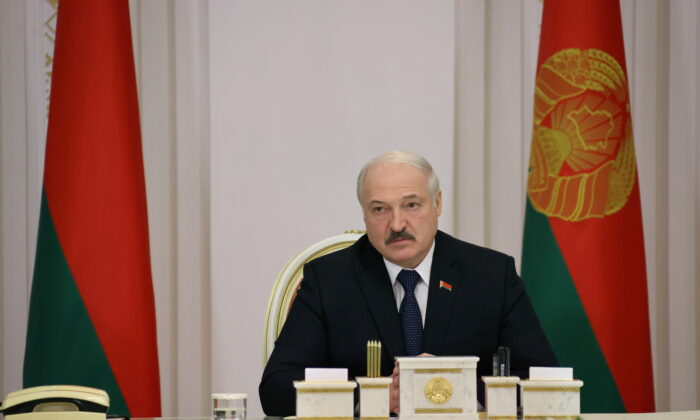 Belarus President Alexander Lukashenko on March 1 appeared to stand in front of a map purported to show Russia’s plans to invade Moldova’s breakaway region of Transnistria, during a meeting with security officials that was broadcast via state-run media.

The map appeared to show troop movements, including an apparent attack or occupation of what appears to be Transnistria from Odessa, a city in southwestern Ukraine. The Russian military reportedly has troops stationed in the area.

During the broadcast, Lukashenko is heard telling the officials, “They warned us, and literally six hours before the launch of the missiles, we discovered this,” according to a translation.

A  tactical missile system was “located here, right?” he said. Someone off-screen then says: “In the Mazyr area,” referring to a city in Belarus.

“In the Mazyr area,” Lukashenko said. “We hit these rockets, these positions. And we haven’t seen them afterward. During the offensive of the Russians in Ukraine, we already didn’t see them from the position. That’s why I’m saying. Yes, we have made launches from the territory of Belarus, and I told, frankly, which positions we targeted. Sit down.”

It’s not clear if Russia or Belarus, a staunch ally of Moscow, plans to invade Moldova, a country that’s situated between Romania and Ukraine and isn’t a European Union or NATO member. Transnistria, which isn’t recognized by most countries, has long had a pro-Russian sentiment. In 2009, the breakaway region’s parliament approved a new flag that looks nearly identical to the Russian tri-color flag.

In the years since the fall of the Soviet Union, Russia’s leadership has considered Transnistria to have a “special status,” although Russia hasn’t declared it an independent state.

The European Union on March 1 imposed new sanctions on Belarus and Lukashenko, who has sometimes been called the “last dictator of Europe,” for aiding Russia’s invasion of Ukraine. Russian troops and armored units attacked Ukraine from Belarus after being stationed along the border for weeks.

Ukrainian officials this week claimed Belarus sent its own military into the country as part of the invasion. Lukashenko denied any direct movement of troops, and a U.S. defense official told reporters this week that there’s been “no indication” of Belarusian troops taking part in the invasion.

Moldovan Embassy officials in Washington didn’t respond by press time to a request by The Epoch Times for comment.