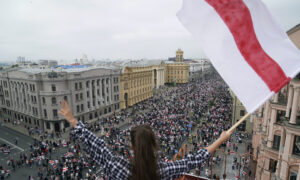 Belarusians Must Be Provided Right to Choose Their Leaders: US Deputy State Secretary
0 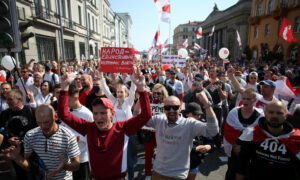 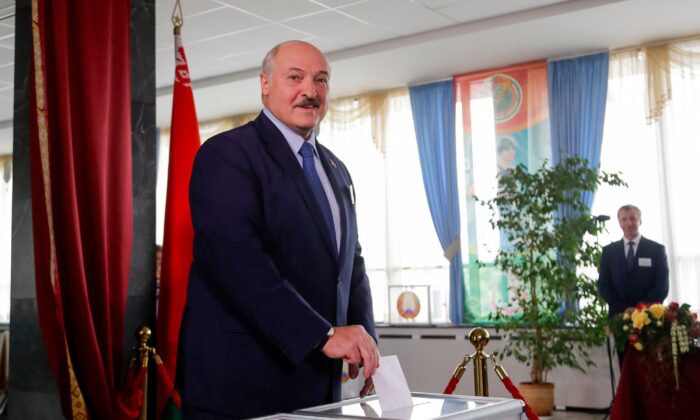 Belarusian President Alexander Lukashenko casts his ballot at a polling station during the election in Minsk, Belarus, on Aug. 9, 2020. (Sergei Grits/AP Photo)
Europe

MINSK, Belarus—Even before the Aug. 9 presidential election in Belarus ended, a poll worker in Minsk said she was asked to sign a document summing up its result, with the vote totals left blank.

Another worker who pointed out violations during the vote-counting was fired on the spot.

In the small city of Vitebsk, a poll worker signed a document with falsified results in favor of President Alexander Lukashenko and later was wracked with guilt for betraying the trust of the voters.

In the three weeks since the election that kept Lukashenko in power with a landslide win, hundreds of thousands of people have protested what they say was a rigged outcome. Demonstrations and strikes in the country have been met by a police crackdown including mass detentions, beatings, and criminal charges against organizers.

The Associated Press interviewed election workers who said they saw ballot fraud or were pressured to falsify results in favor of Lukashenko. In addition, other evidence has been posted online showing falsifications and other irregularities.

To many in Belarus, where Lukashenko has ruled with an iron fist since 1994 and has been accused of rigging previous elections, his victory last month seemed clearly implausible.

His main opponent, former English teacher Sviatlana Tsikhanouskaya, drew crowds of tens of thousands of people after she entered the race in place of her husband, Sergei, a popular opposition blogger who was jailed before the election. She had managed to unite fractured opposition groups, channeling the growing frustration over the country’s weak economy and Lukashenko’s swaggering dismissal of the coronavirus pandemic.

When the results were announced, however, the Central Election Commission said Lukashenko won 4.6 million votes or 80 percent, and Tsikhanouskaya got only 588,000, or 10 percent.

The opposition was prepared for such an outcome—allegations of rigged elections have surfaced in every vote in Belarus since Lukashenko took power in 1994. This time, it trained people to be independent monitors at polling stations, it encouraged poll workers to report violations, and it set up a website where voters could submit photos of their marked ballots to compare with the official count.

Activists monitoring the election said in a report that they received complaints about violations, irregularities, and incidents of some form of vote-rigging from at least 24 percent of the country’s 5,767 precincts.

The report said that they studied just under one-fourth of the nation’s precincts and found that Tsikhanouskaya received over 471,000 votes in those areas alone.

Valeria Artikhovskaya, who worked at a polling station in Minsk, said she still doesn’t know the official results of the vote at her precinct because they were never released.

Artikhovskaya said she was asked to sign the final protocol—a document summing up the vote totals each precinct must display after counting the ballots—before voting even ended, with the totals left blank. Artikhovskaya refused, and once the count started, she noticed other poll workers putting ballots for different candidates into a stack for Lukashenko.

Vadim Korzykov, who worked at another Minsk polling station, told AP he didn’t even get to the signing stage—a senior poll worker dismissed him after he pointed out violations during the count.

The 20-year-old student said his colleagues told him later that the number of votes for Tsikhanouskaya at the precinct was five times higher than what Lukashenko received there.

“It was a travesty of justice. There is no other name I can call it,” Korzykov said in a phone interview on Wednesday.

Andrei Gnidenko, who worked at a poll in Vitebsk, a small city in northeastern Belarus, said he gave in to the pressure and signed a document with falsified results.

According to the final protocol from the station, a photo of which Gnidenko showed AP, Tsikhanouskaya got a total of 156 votes, while Lukashenko received 488. But Gnidenko says he and other workers counted over 250 ballots for Tsikhanouskaya.

When the time came to sign the protocol late at night, everyone was exhausted, and a crowd of residents had gathered outside the polling station, demanding to see the results. Gnidenko felt sorry for everyone and decided to get it over with, a decision he now regrets.

“For the next few days, we were all very severely depressed,” the 29-year-old said Friday. “I decided that since I betrayed the Belarusian people, since I took part in this rigging and put my signature on it, it was my duty to honestly tell it (to the public).”

An audio recording from another polling station in Vitebsk was posted on YouTube in which poll workers are heard being told by an official to falsify the results in favor of Lukashenko. The official suggests that poll workers “swap the numbers” for Lukashenko and Tsikhanouskaya.

“I’m prepared to agree that a lot of people voted for Tsikhanouskaya … but we have other goals and other problems we need to solve,” the official says. After some back and forth, poll workers swap the results.

Some of the workers later confirmed to Belarusian media the authenticity of the recording, which has received over 450,000 hits on YouTube.

“Given the manner in which the vote has been rigged, I can vouch that no one—not us, not the Central Election Commission—knows the real result of the election,” Khomich told the AP.

The Central Election Commission has refused all the candidates’ requests for a recount, and Lukashenko bristled at demands to rerun the vote.

In comments to the AP on Thursday, the commission again rejected the accusations of widespread rigging, saying complaints it received from monitors and voters mostly pointed to procedural violations.

“Most complaints are about final protocols not being put out (for the public),” said Galina Mkrtychyan, head of the commission’s legal department.

The results were not recognized by the four candidates on the ballot with Lukashenko. Both the United States and the European Union have called the election neither free nor fair, and EU foreign ministers are preparing sanctions against senior Belarus officials suspected of election fraud and the subsequent crackdown on protesters.

The Belarus Supreme Court last week refused to overturn the vote, saying it could not rule after election authorities declared it valid.

Maxim Znak, a lawyer and a member of the Coordination Council, which was set up after the election by the opposition to try to negotiate a transition of power with the Lukashenko government, said the court didn’t even look at 26 folders of evidence from Tsikhanouskaya’s allies.

“They did not investigate this evidence, they didn’t check anything, they didn’t call witnesses. They just said that’s not possible,” he told AP.

But activists believe the legal battle is far from over. Voters and independent monitors are submitting individual complaints and demanding that law enforcement agencies investigate rigging in their precincts, Znak said.

“For each of those polling stations where people know that they have voted in one way and official results are different, they continue to fight for their votes. They go to the police. They ask to start a criminal investigation,” he added.

Artikhovskaya, the Minsk poll worker, did just that last week, submitting a formal complaint to the prosecutor’s office about the rigging she saw.

By Kostya Manenkov and Daria Litvinova