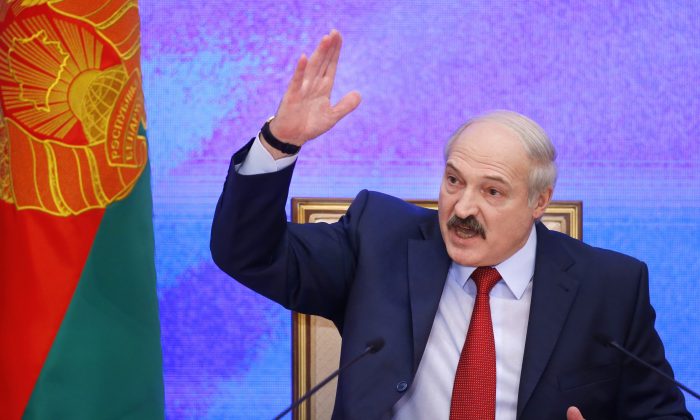 MINSK, Belarus—In the 21 years under Alexander Lukashenko’s rule, Belarus in many ways has seemed little different than the Soviet republic it once was. Dissent is stifled, sometimes harshly. The economy remains largely state-controlled. Even the flag is nearly identical to the Soviet-era emblem.

For all of that, he’s nonetheless sure to win a new term in Sunday’s presidential election. A poll by the state sociology institute in September tallied his support at 76 percent.

Lukashenko came to power in 1994 as a fierce anti-corruption campaigner with a vague political program. The former director of a collective farm appealed to voters who were tired of bureaucrats pilfering the country. A year later, however, Lukashenko disbanded parliament and clamped down on the news media.

The marginalized opposition is in disarray: some of its leaders fled the country; others were jailed; three opposition leaders and one journalist went missing.

After a massive protest on the night of the 2010 presidential election, eight of the 10 candidates were arrested. Some were imprisoned for long periods, one of whom was released only this August.

Lukashenko cultivates the image of “Batka” (Father); the presidential website says “this is what people with an authority and courage to protect their family and community were once called in our land.” His photo opportunities often show him in the countryside: driving a tractor or harvesting grain with a scythe. His earthy provincial accent and knack for folklore augment his man-of-the-people aura.

Lukashenko has largely preserved the state-controlled Soviet type of the economy — albeit thanks to cheap Russia gas and Western loans. The unreformed economy may be crippling the country’s long-term development, but it still puts bread on the table of pensioners and workers of unprofitable, unmodernized factories who look at the instability of neighboring Ukraine and the unpredictable Russia with dismay.

“Lukashenko instilled the worst Soviet myths in Belarussians, offering them warm bread instead of freedom,” says Stanislav Shushkevich, the first president of independent Belarus, who lost to Lukashenko in 1994.

The 61-year-old president has three sons: 39-year old Viktor, an adviser on the national security council; Dmitry, 35, a functionary with the national Olympic committee; and 11-year-old Nikolai, also known as Kolya.

Lukashenko no longer lives with his wife — though it’s not known if they’re divorced — and Kolya effectively plays the role of First Lady. He posed with his father, President Barack Obama and Michelle Obama last month in New York, where he also sat with the Belarusian delegation at the U.N. General Assembly.

Lukashenko said in an interview that Kolya tags along with him because the boy has a bad temper and won’t listen to anyone else but him.

“Kolya is making fun of the entire country,” says opposition leader Anatoly Lebedko. “The older Kolya gets, the more speculation he attracts. When the father was dragging the boy along with him, it caused sympathy, now that he is a teenager, it is not funny anymore.”

Lukashenko’s political longevity rests on his remarkable ability to maneuver between Russia and the West, living off cheap energy from Russia and loans from Europe. He is a master of switching sides and changing horses to suit his agenda and stay in power.

Official Says There was No Russia Earthquake Near Border with Ukraine, Belarus

Russia’s Ukraine Invasion May Push Belarus to Embrace the West

When the European Union was pushing the Batka in 2009 to allow freedom of the press, abolish capital punishment and hold an election reform, Lukashenko said “no” and turned to Russia instead, agreeing to join Russian President Vladimir Putin’s Eurasian Economic Union.

When Russia annexed Ukraine’s Crimea in March 2014 and threw its support behind separatist rebels in the east, Lukashenko looked just like the person who could help Putin legitimize his actions in Ukraine. But Lukashenko did not recognize Russia’s land grab.

Soon after that officials in Washington and Brussels began to talk about lifting at least some of the sanctions which were slapped on Lukashenko and Belarusian companies in 2006.

On Friday, an EU official said it may suspend sanctions on Belarus, following the release of political prisoners there earlier this year, signaling what could be the end of the nine-year-long international isolation.

“The lifting of the sanctions could herald a new phase of European diplomacy — with fewer sermons of European values but more practical issues,” says Minsk-based analyst Yaroslav Romanchik.

Svetlana Alexievich, a Belarusian writer who was awarded the Nobel Literature Prize earlier this week and is a critic of Lukashenko, says the president is playing with fire, balancing between the unpredictable Putin and the West which is well aware of Lukashenko’s weaknesses.

“Belarus would survive if it were to turn to the European Union,” Alexievich says. “Lukashenko is in a tight spot, of course. He would love to let go of Russia but they (the Kremlin) won’t allow it. On the one hand, he is bound by his past; on the other, there is Putin.”