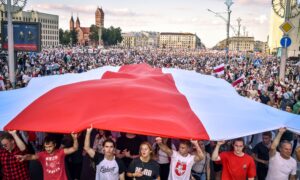 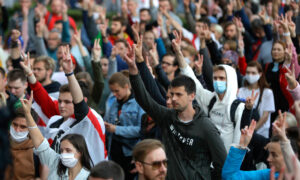 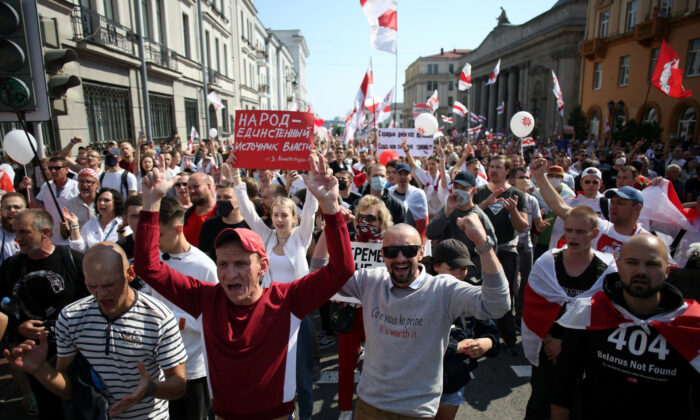 MOSCOW—Belarus, shaken by three weeks of massive protests against its authoritarian president, on Aug. 29 cracked down hard on the news media, deporting some foreign journalists reporting in the country and revoking the accreditation of many Belarusian journalists.

Two Moscow-based Associated Press journalists who were covering the recent protests in Belarus were deported to Russia on Aug. 29. In addition, the AP’s Belarusian journalists were told by the government that their press credentials had been revoked.

“The Associated Press decries in the strongest terms this blatant attack on press freedom in Belarus. AP calls on the Belarusian government to reinstate the credentials of independent journalists and allow them to continue reporting the facts of what is happening in Belarus to the world,” said Lauren Easton, the AP’s director of media relations.

Criticism over the crackdown came from both media outlets and governments.

The program director for ARD’s biggest regional affiliate, WDR, which oversees the coverage of Belarus, called the treatment of its camera team “absolutely unacceptable.”

“This shows once again that independent reporting in Belarus continues to be hindered and is made almost impossible,” Joerg Schoeneborn said.

German Foreign Minister Heiko Maas summoned the Belarusian ambassador following the detention and expulsion of the foreign journalists in Minsk and said “this attack on press freedom is another dangerous step toward more repression instead of dialogue with the population.”

U.N. Secretary-General Antonio Guterres “has consistently called for journalists to be able to do their work free from harassment, anywhere in the world,” U.N. spokesman Stephane Dujarric said.

U.S. State Department spokeswoman Morgan Ortagus urged the government in Belarus to show restraint, to release those unjustly detained and to account for protesters reported missing.

“We are concerned by the continued targeting of journalists, the blocking of independent media and opposition websites, intermittent internet blackouts, and random detentions of peaceful citizens exercising their rights of freedom of assembly and speech,” she said.

Protests in Belarus began after the Aug. 9 presidential election that officials said gave President Alexander Lukashenko a sixth term in office with 80 percent support. Protesters say the results were rigged and are calling for Lukashenko, who has run the country since 1994, to resign.

The protests, some of which drew enormous crowds estimated at 200,000 or more, are the largest and most sustained challenge yet to Lukashenko’s 26 years in office, during which he consistently repressed opposition and independent news media.

On Aug. 30, tens of thousands of protesters streamed into central Minsk carrying balloons, flowers, and flags as Lukashenko turned 66.

Belarusians chanting “Happy Birthday, you rat” and flying red-and-white opposition flags gathered near Lukashenko’s residence on Aug. 30 as protesters kept up pressure on the veteran leader to resign, before dispersing peacefully. Belarus had a white-red-white flag for a brief period in the early 1990s and it has become a symbol of its anti-government protests.

The hard-line leader has cast about for a strategy to end the wave of protests, with little success. In the first days of demonstrations, around 7,000 people were arrested. Some protesters were killed and many detainees were beaten by police. The violence didn’t deter the protests and may have even galvanized the opposition. Strikes have broken out in several state-owned factories, which are the backbone of Belarus’ ailing economy.

Russian President Vladimir Putin has said he would be willing to send in police to quell the protests in neighboring Belarus if Lukashenko asked him to, a prospect that clearly worries the United States.

“We stand by our long-term commitment to support Belarus’ sovereignty and territorial integrity, as well as the aspirations of the Belarusian people to choose their leaders and to choose their own path, free from external intervention,” Ortagus, the U.S. spokeswoman, said in the statement.