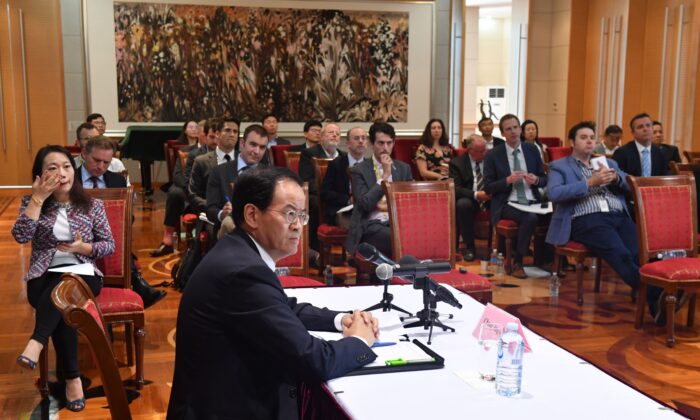 China’s Ambassador to Australia Cheng Jingye hosting a press conference at his residence in Canberra on April 7, 2021. (AAP Image/Mick Tsikas)
Thinking About China

Australia is a case in point—for both China’s trading partners and for decision-makers in Beijing. Because in 2020 Australia had asked too many questions about the origin of the SARS-CoV-2 virus, Beijing had set out to deprive it of lucrative aspects of its China trade.

But Australia has managed to replace much of what it lost in China. The two lessons are clear: China is not as big as Beijing seems to think, and China’s trading partners have more alternatives than is commonly believed.

The dispute blew up early in the first year of the COVID-19 pandemic. Canberra in April 2020 led an international call to investigate the origins of the virus in Wuhan, the capital of China’s Hubei Province. Beijing reacted immediately. It instructed its ambassador to Australia, Cheng Jingye, to threaten consumer boycotts of Australian products.

In May 2020, Chinese authorities imposed massive “anti-dumping” duties on Australian barley, one of the country’s principal exports to China.

In November 2020, Beijing handed Canberra a list of “14 grievances,” threatening no return to normal trade relationships until Australia complied.

China has used trade sanctions before to try to wring diplomatic concessions from countries, including Canada, Japan, Lithuania, Mongolia, Norway, the Philippines, South Korea, and Taiwan.

The move against Australia was, however, unprecedented in its speed and severity. And if there ever was a country seemingly vulnerable to such pressure, it was Australia. In recent years, China had grown increasingly important to Australian trade. The volume had trebled in just the five years leading up to the dispute. China absorbed a great proportion of Australian overseas sales of coal, natural gas, and agricultural products. Money flows from Chinese tourists and students had also become important to the Australian economy. At the start of this trouble, China absorbed fully 40 percent of all Australian exports, approximately AU$149 billion (about $110 billion).

Yet Australia managed to avoid most of the economic pain that Beijing sought to inflict. Australian exporters found workarounds and, more significantly, alternative markets. Beef producers sent their cattle to abattoirs that, for one reason or another, had retained their export licenses in China. Lobster farmers found ways into Chinese markets through existing Hong Kong arrangements. China, to replace Australian coal, had tapped Russian and Indonesian sources, leaving it to the Australians to sell coal to former clients of Russia and Indonesia who had lost out to the new Chinese demand. Australian barley farmers found ready buyers in Saudi Arabia and Southeast Asia. Europe and Japan consumed the Australian copper that China no longer bought, while Bangladesh and Vietnam did the same for Australian cotton. Timber and wine were tailored to the Chinese market, so they have had more difficulty finding substitutes, but they are adjusting.

Not only did Beijing’s fit of pique fail to do Australia much economic harm, but it brought China diplomatic setbacks in its wake. Its representatives suffered embarrassment at the 2021 G-7 summit in Rome, when the Australian delegation distributed copies of the “14 grievances” as an example of Chinese coercion. More substantively, it seems likely that Beijing’s ruthless economic pressure contributed to Canberra’s decision to press ahead with the Quadrilateral Security Dialogue with India, Japan, and the United States, as well as develop the AUKUS security partnership with the United Kingdom and the United States.

Beijing frequently chides Washington for its arrogance and overreach. It is often on the mark. Such behavior seldom gets the results intended for it. China’s authorities might also look in the mirror and take the lesson for themselves. Their high-handed effort to bully Canberra has done Australia little harm and in the balance upset what were once useful trade relationships for China. It has embarrassed Beijing on the world stage and at the margin tipped the military balance away from China. All told, it speaks to poor planning and an adolescent petulance that never has a place in world affairs.