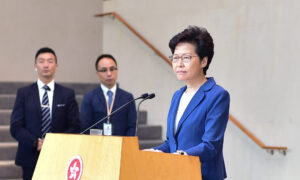 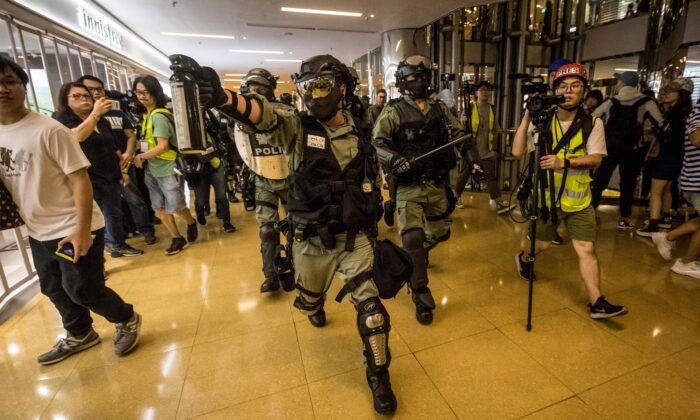 A riot police officer chases a protester while wielding a can of pepper spray inside the City Plaza mall in the Tai Koo Shing area in Hong Kong on Nov. 3, 2019. (Vivek Prakash/AFP via Getty Images)
HK Current Affairs

Beijing is currently implementing at least six strategies of unrestricted warfare in Hong Kong to quell the ongoing protests.

Unrestricted warfare, literally warfare without bounds, is a term created by the Chinese Communist Party (CCP) military strategists. In 1999, two colonels in the People’s Liberation Army (PLA) published a book titled “Unrestricted Warfare” in which they discussed various methods of bringing devastating disasters to a technologically superior opponent, such as the United States, without waging overt war.

I predicted two months ago in my news analysis column that Hong Kong authorities would continue to suppress the Hong Kong people’s freedom of assembly, by limiting mass parades and rallies—exactly what is happening now.

Hong Kong police have refused to grant permits for rallies and parades several times. When occasionally a permit was granted, police tried to disperse the crowd by firing tear gas and other crowd-control weapons before the activity even started.

Like a python entangling and then squeezing its prey, the Chinese authorities and Hong Kong leaders continuously stifle freedom of speech and freedom of assembly in Hong Kong. They hope that Hongkongers will gradually get used to this as the norm and eventually stop fighting for democracy. At the same time, they are making it ever more difficult for Hong Kong protesters to organize large-scale rallies or parades, for fear that the scene of millions of participants will deeply impress and inspire people in mainland China and supporters around the world.

If we call Hong Kong’s anti-government movement a person, then the CCP and the Hong Kong government not only plan to suffocate this person, but also make numerous cuts to his arteries and veins.

The Hong Kong government also cut the protesters’ communication channels by imposing restrictions on LIHKG Forum and Telegram, the Hong Kong version of Reddit where many protesters exchange information and ideas. In addition, the government has restricted the MTR’s (the metro train system) operation network, making it increasingly difficult for people to organize large scale activities.

It is well-known that the law sets minimum standards for public behavior. That is to say, the fundamental basis of law is actually morality. If a law is not ethical, or if the law enforcer does not demonstrate minimum moral standards, then such a law will become an evil law.

Many countries have national security laws, so why does the Hong Kong Basic Law Article 23, which states that Hong Kong shall enact laws on its own to prohibit any act of treason, secession, sedition, subversion against the Central People’s Government, along with the proposed extradition bill, cause deep worry and anxiety for millions of Hongkongers? It is because they know that the Chinese communist regime has no bottom line of morality restricting it. Everyone is worried that the CCP will use these laws to abuse power and arbitrarily arrest anyone who opposes them.

The actions of the Hong Kong police show that they have literally degenerated to lawless hooligans. They have invaded private residences, made random unwarranted arrests, verbally abused protesters by calling them such things as “roaches,” and even tortured and sexually abused protesters who were in detention.

The laws and law enforcers in Hong Kong can no longer serve their stated purpose of upholding justice and maintaining social order; instead, they have become a weapon for the CCP to conquer the people and silence all dissent.

Recently, Hong Kong police launched violent attacks on journalists and even arrested some of them.

It was reported that the Hong Kong government plans to review the qualifications of each journalist and restrict their reporting scope, indicating that the CCP and Hong Kong leaders are trying to silence all journalists so that international society will see fewer and fewer news reports about Hong Kong protests as they happen.

At the same time, the suppression of protesters will gradually become covert; that is, evil deeds will be committed out of the public eye. Eventually, the international community would think that the CCP has won the battle against the protesters.

This is by no means an exaggeration. In Taiwan, some people are asking whether the number of protesters in Hong Kong has drastically decreased and that only a handful are still protesting, because there are very few reports about Hong Kong protests in Taiwanese media. This is the CCP objective through its tactic of silencing journalists.

Strategy 5: The War of Terror

The CCP is waging a war of terror in Hong Kong, mainly through police violence in dealing with protests, police torturing protesters held in detention, and mobilizing gangsters to attack protesters and pro-democracy lawmakers.

For instance, during the knife attack at Taikoo Shing last weekend, a man injured many pedestrians with a knife and bit off the left ear of a pro-democracy politician. Such a frantic and astonishing incident is intended to create fear among all Hongkongers and weaken the will of the protesters.

“Unite with the secondary enemy and together we fight against the main enemy” is one of the key political statements of former Chinese leader Mao Zedong. Its essence is to divide and conquer, a strategy that has been used to tackle the Hong Kong protests from the very beginning.

The Beijing and Hong Kong governments initially labeled the protesters “a handful of rioters,” criticizing them for undermining Hong Kong’s stability and economy in an attempt to drive a wedge between the protesters and the rest of society. At the same time, through violent suppression, creating fear, social unrest, and interrupting public transportation, the authorities try to intensify the misunderstanding of and hostility toward the protesters.

To put it simply, the CCP wielded a large knife in one hand and distributed candy with the other to divide the citizens of Hong Kong. When the goal of splitting Hong Kong society is achieved, the CCP will play the role of a kindhearted peacemaker.

The CCP has used this strategy repeatedly in mainland China with much success. As a result, although the CCP itself is the root cause of numerous social problems in China, many Chinese people who lack the ability to think clearly and are afraid of social unrest, choose to believe that the CCP is a problem solver, and hate those fellow Chinese citizens who are victims of injustice yet labeled as troublemakers.

To summarize, the CCP launched comprehensive unrestricted warfare against the Hong Kong people by militarizing and weaponizing all aspects of politics, economy, media, law, and public transportation. Although we haven’t seen a single invader wearing a military uniform, it is nonetheless a war in the true sense.

Their approach tells us that in the eyes of the CCP, the biggest enemy is the people. The CCP slogan “Serving the People,” which it advocates day and night, is just a propaganda tool and a means of psychological warfare.

Remember, when the CCP flaunts anything, it is usually what the CCP itself is lacking. For example, when the CCP touts a “harmonious society,” it means Chinese society is not harmonious; when the CCP emphasizes “people,” it means the CCP does not care about the people.

Therefore, we sincerely hope that the Hong Kong people will pay attention to their safety in the following weeks. We also call on supporters from other countries to pay close attention to the situation in Hong Kong and help Hongkongers spread the truth about their fight and the facts about police brutality, so that the world can continue to hear the Hong Kong people’s voice and know about the CCP evildoings in Hong Kong.