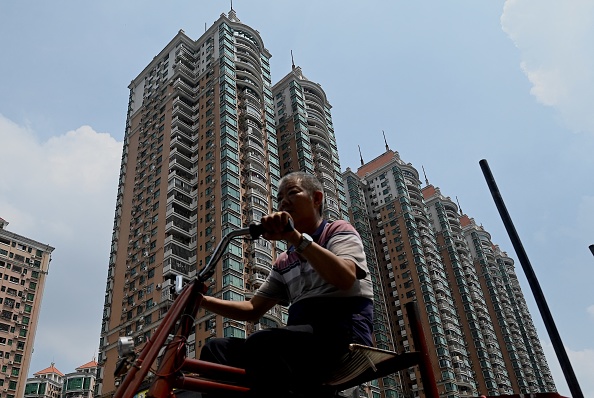 China’s second-largest property developer Evergrande is on the verge of collapse, causing a massive number of investors and homebuyers to gather at its headquarters—defending their rights. The majority of investors are employees of Evergrande.

Ms. Yang (pseudonym), a financial adviser at subsidiary Evergrande Wealth, told the Chinese edition of The Epoch Times that the company is suspected of managing its finance products illegally. She blamed the regime’s regulator for dereliction of duties.

In an interview on Sept. 14, Yang said that there are around 700 to 800 financial advisers across the country, serving 80,000 to 100,000 customers. “Evergrande Wealth has an investment scale of tens of billions of dollars, and the current unpaid funds are around $6 billion,” Yang said.

According to Evergrande Wealth’s official website, community-based financial service is the business model for Evergrande Wealth, which business development relies on Evergrande’s 1,300 housing projects and 12 million homeowners in more than 280 cities.

Yang said, “Financial advisers are facing tremendous pressure from clients. Many of the advisers have also invested in those products. Most of the clients are indeed employees of various departments of Evergrande.”

Yang manages about 100 clients, with a total investment of around $6 million, of which $4.6 million came from Evergrande employees, and the rest from Evergrande homeowners and other individual customers.

The company’s primary pool of investors is employees and their friends and family. People who bought the products were also approved for bank loans. She said that Evergrande has about 140,000 employees, and they were all required to purchase financial products as a criterion of their annual assessment.

A former employee of Evergrande Wealth, Mr. Chou (pseudonym), also told The Epoch Times on Sept. 14 that he was aware of this requirement when he was working at the company in 2015.

On Sept. 16, Yang said that the company has stopped selling financial products. Now her job is to explain to clients how they can claim back their principal. She also indicated that many financial advisers have disappeared for fear of personal security, while others are seeking their way to protest.

Yang suspected that the company was illegally increasing liquidity by selling products of a shell company.

She said that Evergrande’s financial products were designed to get cash for upstream companies (contractors)—the shell companies.

Evergrande creates a wealth management product for a certain project, files it with the local financial assets exchange, and then Evergrande Wealth will sell the product. After the completion of the project, Evergrande pays the contractor with money earned through selling the financing products, and the contractor gets to make the payments to the investors.

“In reality, the information of upstream companies is not transparent. The employees can only check the registration status. There is no detailed information such as the contract between the contractors and Evergrande. We were only told it’s all confidential, and it’s supervised.” Yang said.

She said that there’s no substantive evidence to determine whether or not the company is getting cash for itself, but it’s very likely.

Yang also said that Evergrande did not provide professional training to sales staff on wealth management products. She believes that one of the main reasons is because Evergrande regards employees as its main customers through the annual assessment requirement, which essentially forces employees to invest in the products.

In addition, in April and May, investors were allowed to cash out in advance, but the company required financial advisers to push investors to increase their investments in the products. The purpose of allowing investors to receive payment in advance is so they will have additional funds to pour back into the products. However, many high-level executives simply took the payment without further investment.

Yang said, “If Evergrande indeed acted illegally in increasing liquidity, the governmental regulators are to be blamed.”

She added, “The company claimed that there’s supervision on the contract. Did the regulator do its job? Now this is definitely negligent. If the financial products’ earnings really flowed back to Evergrande, the supervision is simply nonexistent.”

Evergrande was founded in 1996, just two years before China started its housing reform in 1998, which also started the housing market in China.

The 1998 monetization of housing during the reform took place in two directions.

First, it was “propertized [the actions of creating a property from a resource] by transferring the property rights of welfare houses from work units to worker families through housing transactions in housing reform,” according to a 2019 article in The Journal of Chinese Sociology.

Shortly after that, the local governments began to sell land at high prices. As a result, real estate prices rose rapidly and a large amount of residents’ cash flowed into the real estate market.

Real estate developers such as Evergrande also obtained momentum when the regime provided developers with a variety of conveniences.

According to a May 2019 report at Knowledge@Wharton (pdf), Evergrande’s astonishing growth “was built on a ‘high debt, high leverage, high turnover, and low cost’ model.”

Its first real estate project (Jinbi Garden in Guangzhou City, southern China) took just one year to complete the entire development cycle of the project, including government approval, land acquisition, construction, sales, and occupancy. Evergrande was able to obtain loans from banks and developed 13 more large-scale projects in Guangzhou in the early 2000s.

Yang revealed that industry insiders know that many Chinese real estate developers manipulated the shell companies model, which earn cash through selling wealth management products to investors, but pour the cash back into the real estate. She believes that Evergrande is the largest manipulator in scale.