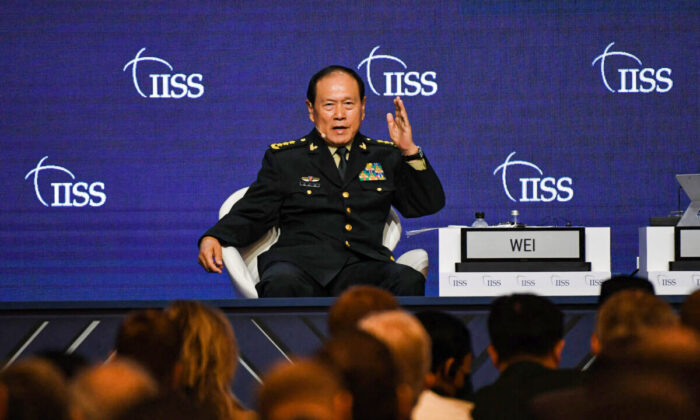 Beijing’s Recent Allegations Against India Could Be ‘Pretext’ for Future Attack: Expert

It’s been two years since Indian and Chinese soldiers clashed at the inhospitable heights of the trans-Himalayan Galwan Valley in Ladakh in June 2020.

While the military standoff continues between the two sides, the Chinese communist leadership has again levied charges against India that experts say could be a pretext for an attack on the world’s largest democracy.

Wei claimed that China wasn’t responsible for the standoff and that Indian weapons were found on Chinese territory.

“The merits of the China-India border conflicts are very clear, and the responsibility does not lie with China,” said Wei while responding to questions from a journalist on June 12.

“A lot of weapons owned by the Indian side. They have also sent people to Chinese territory.”

The Chinese Communist Party (CCP) has a track record of unilaterally altering its border claims with India since 1952. Frank Lehberger, a Europe-based sinologist and expert on greater China, told The Epoch Times that Wei’s speech in Singapore was carried out at the behest of the communist leadership and that his statements could be a pretext for future operations against India on the disputed border.

“Copying Putin in Ukraine, Xi could also be tempted to use bogus accusations as a pretext for a future ‘special operation’ of PLA troops in Ladakh or anywhere else on the Sino-Indian border,” said Lehberger.

India and China fought a war in 1962, and Indian and Chinese soldiers were engaged in a bloody conflict in the Galwan Valley in June 2020, after which both sides began to rapidly ramp up their military presence. Meanwhile, 15 rounds of military talks have made little headway.

The last round of unsuccessful talks took place on May 31. However, the two sides have decided to hold the 16th round of military talks in the near future to achieve disengagement at all friction points in the disputed border region.

Claude Arpi, a French-born sinologist, told The Epoch Times that Wei’s statements could be a pretext for a future military operation, but India is geared up to face any attack.

“It was not the case in May 2020. Even if they [CCP] have greatly improved the infrastructure on their side, particularly in the Aksai Chin area, they can’t expect today a quick and decisive victory in eastern Ladakh,” said Arpi.

Aksai Chin is an uninhabited cold desert under the Kunlun mountains. Today it lies at the junction of India, China, and Pakistan-controlled territories. Originally claimed by India as part of its greater Ladakh region, the CCP started its conquest in 1952 by building the G219 highway connecting Xinjiang and Tibet.

Arpi authored two books on the 1962 India-China war and other books on Tibet and the Sino-India territorial dispute.

Through its continuing “salami slicing” tactics, China’s People’s Liberation Army continues to move south from the road to where the disputed border stands today.

Wei’s allegations that Indian weapons were on Chinese territory and that India is responsible for the Galwan conflict are made at the behest of the CCP’s Central Military Committee (CMC), according to China observers.

Wei is a member of the CMC, and according to Lehberger, the defense minister plays only a secondary role in important military matters—the CMC is the central system of China’s military department.

“Nowadays Xu must not meet foreigners at home or abroad and must dispense propaganda nonsense … that is Wei’s main task now. On trips abroad, Wei is tasked with acting as some kind of ‘external military propagandist’ for [Chinese leader] Xi Jinping and his CMC,” said Lehberger.

He added that Wei was tasked by Xi to challenge the established international law and order and to confuse the global public opinion through his talks at the Shangri-La Dialogue.

“Now Wei is accusing QUAD member India of doing whatever [they are doing] on the Chinese side of the line of actual control … an integral part of Xi’s long-term strategy in Asia,” said Lehberger.

“Xi’s Strategic goal is to obliterate the sovereignty of the nations all over Asia, with military or other subversive means.”

Arpi said that Wei’s statements at the security summit were meant to support the CCP’s domestic narrative ahead of the 20th Congress, which will be held sometime in the second half of this year.

“They want the Chinese people to believe that India attacked PLA in eastern Ladakh. The 16th round of the commander-level talks between the two countries is going to be held soon. Not much [militarily] will happen in my view before the 20th Congress,” said Arpi.

Lehberger said that Wei’s comments at the Shangri-La Dialogue could shed light on how the top Chinese leadership views the India-China border conflict and the domestic and geopolitical context in which the Chinese leaders are defining their tactical responses on the issue.

Domestically, Wei’s comments are meant to disburse Xi’s message to the nationalist crowds of “jingoist, COVID-frustrated Chinese,” who will be pleased that China is apparently becoming Asia’s top player and will be more likely to support Xi more fervently, Lehberger said.

Internationally, Xi aims to make the United States look weak and incompetent in protecting the interests of its allies in Asia, he added.

Pooran Pandey, an international relations analyst who currently advises and writes for think tanks in Africa, Europe, and the United States, including the California-based Global Techno Politics Forum, told The Epoch Times over the phone that India shouldn’t read much into Wei’s remarks because they’re more of a rebuttal to Secretary of Defense Lloyd J. Austin’s statements at the Shangri-La Dialogue.

In a speech on June 11, a day before Wei delivered his remarks, Austin condemned China for “hardening” its position on the disputed border with India.

Pandey believes New Delhi should focus on understanding Beijing’s mid-century global agendas that will have a direct and long-term bearing on India. He said China’s main focus is its “grand plan” that involves surpassing the United States—militarily and economically—by 2045.

He added that the Chinese leadership wouldn’t do anything detrimental to its agenda, including taking further action that could worsen the situation in Galwan or Ladakh.

“[The] Chinese are working on their grand plan, and within that, there could be many small plans. And this is where I think India would really need to do its own work and engage with the world at large,” said Pandey.

On the issue of long-term bilateral engagement, he emphasized the need for India not to trust the Chinese regime and to deal with it head-on.