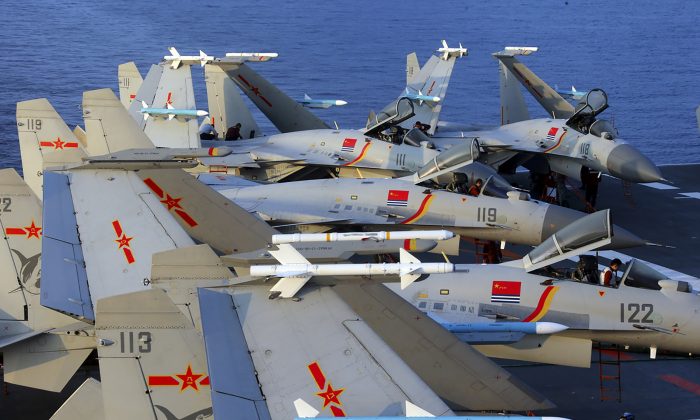 China’s People’s Liberation Army (PLA) bombers are likely training for strikes against the United States and its allies, and a massive fleet of maritime militia that’s controlled by Beijing is being used to support the regime’s aggression in the South China Sea and beyond, according to a new Pentagon report on the Chinese regime’s military capabilities.

The 2018 annual report to Congress on China’s military and security developments estimates that Beijing spent $190 billion on the military in 2017 alone, an increase from last year’s estimate of $180 billion, even as China’s GDP growth has stalled.

The Aug. 16 report explicitly described the PLA’s expansion and restlessness as being aimed at preparing for a war.

“Over the past three years, the PLA has rapidly expanded its overwater bomber operating areas, gaining experience in critical maritime regions and likely training for strikes against U.S. and allied targets,” the report says.

The description echoes numerous reports from Taiwan and Japan. Both countries have had increasing interceptions of Chinese aircraft and warships in the East China Sea and Western Pacific.

The report also says that some of the investments in China’s One Belt, One Road initiative around the world could advance “military advantages” for the Chinese regime.

Another new aspect highlighted in the report is China’s massive fleet of paramilitary sea forces that could be used to augment the PLA Navy in a war. The fleet consists of hundreds of ships from China’s coast guard—which is already the world’s largest—and the People’s Armed Forces Maritime Militia, which could mobilize vessels from China’s state-owned fishing fleet and other non-military sources.

The Chinese regime can use these paramilitary sea units to advance coercive territorial and maritime claims in the South and East China Seas, the report says.

Andrew Erickson, a professor of strategy at the U.S. Naval War College, says the new report’s focus on the Maritime Militia is important because it alerts the world to the force’s existence and thus could deter its future use.

The Chinese regime’s Ministry of National Defense issued a statement Aug. 17 blasting the Pentagon report, claiming that its military buildup is aimed at “upholding world peace and prosperity,” and criticizing the United States for having a “cold war mentality.”

The new report, however, doesn’t cover some potentially significant aspects of China’s military advance that have been documented by analysts elsewhere. For example, it doesn’t mention the PLA Navy’s prototype electromagnetic railgun that was widely reported earlier this year, which many observers say could become a game-changer in future naval warfare.

Meanwhile, the report does predict that the Chinese regime will start building a new aircraft carrier in 2018 that will feature a catapult to enable additional fixed-wing early-warning aircraft and more rapid flight operations. The construction of the third aircraft carrier has already been reported by some sources earlier this year and is further supported by recent photos uploaded to China’s social-media sites that supposedly show work underway in two Chinese shipbuilding yards.