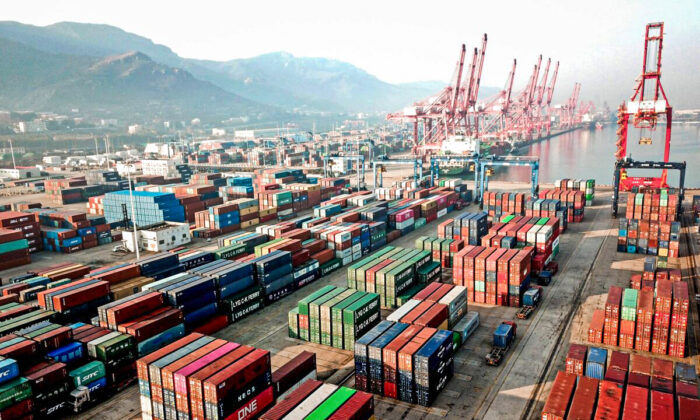 Beijing’s marked failure to meet its promises under the “phase one” trade deal signed in January 2020, and its ongoing flouting of World Trade Organization (WTO) rules and guidelines, call for a shift in how the United States and aligned nations approach commerce with the vast markets of China, experts said.

The Peterson Institute for International Economics has published a trade tracker giving the breakdown of shortfalls within specific import sectors. In agriculture, for example, China had purchased a total of $56.3 billion worth of agricultural goods by November 2021, out of a $74 billion target by the end of that month and an overall $80.1 billion commitment for 2020-2021. In energy, China had imported $28.6 billion in products out of a $60.3 billion target and a total $66 billion commitment for the two years.

The failure to meet the phase-one commitments has been met with growing frustration by the Biden administration, which has been pressing Beijing for “concrete action” to meet its obligations, an unnamed U.S. official told Reuters on Feb. 7. “Our patience is wearing thin,” the official said.

The issue is getting increased attention now because the trade partners involved have just come to the end of the two-year period that the deal covered, and are at a point where the intake of goods can be measured relative to trade targets, and also because of high-level discussions going on between the United States and China, acknowledged Clete Willems, a partner at the corporate law firm Akin Gump and a deputy director of the White House National Economic Council during the Trump administration.

Another factor, Willems said, is that President Joe Biden has now been in office for a year and the continuing absence of clarity and of a forcefully articulated strategy with regard to trade with China has led the U.S. business community and members of Congress to step up pressure over the issue.

To some observers, the Biden administration’s nebulous stance contrasts with the more focused and forceful approach of its predecessor.

“The past administration was much more proactive in really taking actions to try to change China’s behavior, whereas this one is maintaining the status quo, and hasn’t really articulated what it wants to do,” Willems said.

Complexities of Phase One Compliance

It is important to acknowledge that the trade agreement signed in January 2020 has not been an utter failure, and to give up completely on trade pacts vis à vis China would be a mistake, experts said. China’s political and business classes have not ignored all their commitments under the deal.

“They did implement a lot of reforms that we asked them to do on agriculture, breaking down barriers that were not scientific in nature. They made changes to laws in IP and they did open up certain elements of their financial services sector,” Willems said.

“On the other hand, there are aspects on the strategic side—around biotechnology, patent litigation, and counterfeiting—and they are woefully short on their purchases. So I think that, in any fair assessment, it’s a mixed bag,” Willems added.

Intellectual property, in particular, continues to be a grave concern. Although the phase one deal specifically took on this issue, U.S. businesses continue to lose many millions through intellectual property (IP) theft and forced technology transfers.

“My general impression is that there has not really been any significant progress in this area, although Chinese leaders recognize the fact that a sound IPR [intellectual property rights] protection system is also necessary for their own firms to become innovators,” said Dylan Sutherland, a professor at Durham University in the UK.

Willems sees Biden as being in a tricky position. On the one hand, Biden is subject to heavy pressures from the U.S. farming sector over Beijing’s failure to import nearly as many agricultural goods as envisioned in the deal. Companies in that sector are likely to be highly aggressive about protecting their interests. But if the U.S. administration takes strong enforcement action, Beijing’s response is hard to predict, Willems cautioned. Beijing might make a defiant response and raise tariffs on U.S. goods.

Recent remarks from the president suggesting that China needs to make some concessions in order for Washington to lower tariffs on Chinese goods suggest that Biden is content, for now, to engage through diplomatic channels in quid-pro-quo bartering. His position appears to indicate a belief that stepped-up compliance and purchases of U.S. goods on Beijing’s part are still possible without enforcement action.

But there are grounds for skepticism about this approach. Beijing does not appear eager to make new commitments, having blamed external factors such as COVID-19 and U.S. export controls for the failure to meet import commitments and goals, much to the frustration of U.S. officials.

“Things will reach a breaking point where they need to figure out how to take enforcement action, but articulate this to China in a way that doesn’t totally get China to withdraw from the deal,” Willems said.

It may be time to revisit the panoply of tariffs put in place against China—Washington still has tariffs on hundreds of billions worth of Chinese imports—and ask which of them are showing practical benefits and inducing Beijing to change its behavior, and which are falling flat. Willems sees such a case-by-case reevaluation as a pragmatic solution that U.S. politicians would not have undue trouble selling domestically.

Part of the problem on the U.S. side is the lack of total transparency. Members of Congress with whom Willems has spoken have expressed frustration, he said. U.S. business leaders could benefit from expanded reporting from the U.S. Trade Representative’s office so that they can more precisely chart the effects of import goals and tariffs on specific areas of the market, Willems believes.

“It would be very useful if the U.S. Trade Representative actually provided full reporting,” he said.

The United States has itself restricted the sale of certain items to China, like semiconductors, without which it is trickier for China to fulfill import quotas to the United States, said Sutherland at Durham University.

“Many economists also believe the trade deficits with China are structural, owing to lack of consumption in China. Against this backdrop, facilitating the reorientation of Chinese consumerism will be important,” Sutherland said.

“So the challenges to rebalancing of trade relations will require a long-term policy approach, mainly on the Chinese side. As deleveraging of the property sector shows, changing the development model is not easy,” he added.

Others question whether attempting to alleviate the trade deficit on a product-by-product basis will work, given how rapidly and spontaneously the markets for given products shift and the difficulty, if not impossibility of meeting, all targets across industries and sectors. The Peterson Institute’s trade tracker affirms how common it is for China to miss import goals in specific product categories.

“My guess is that the only basis for a stable agreement on trade between these two countries would be something different from just accelerated purchases on a product-by-product basis. It would have to be a negotiated settlement at a very aggregate level, some kind of quantitative target of total exports and imports,” said Thomas Hout, a professor at Tufts University.

Doing away with specific import targets in a given sector—such as agriculture—would give a party to the deal the freedom to make up for the shortfall there in a different sector, like technology, thereby meeting its aggregate target. To a certain extent, such aggregation may be inevitable in a world where the markets for given products swing so unpredictably.

“It’s like most agreements between conflicting parties. If you express all your targets in a very detailed fashion, the other side will always be aggregating some of them or unable to meet some of them,” Hout said.