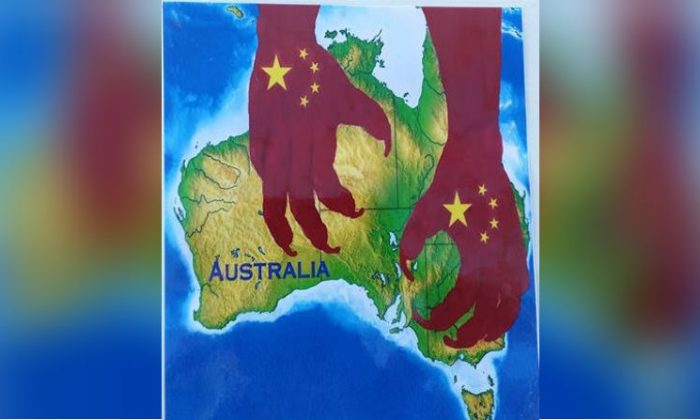 File photo of an image on a placard in Melbourne, Australia, to call for end to Chinese Communist Party militarisation of South China Sea on Sept. 30, 2018. (Leigh Smith/Facebook)
Asia & Pacific

Australia’s incumbent and shadow Foreign Ministers Marise Payne and Penny Wong have said Beijing must put a halt to its campaign of coercion against the country before diplomatic relations can resume.

Speaking at the Foreign Affairs Debate in the lead up to the federal election on May 21, Payne and Wong presented a united front when asked how their parties would “de-escalate” Australia’s diplomatic relationship with China. Both declared that any chance of diplomatic ties thawing would only occur if the Chinese Communist Party’s (CCP) hostile actions—including an ongoing trade war—were stopped.

When asked about de-escalating tensions with the CCP, current Foreign Minister Marise Payne said she did not accept Australia had done anything to spark the current diplomatic tensions with China.

“I don’t necessarily accept that Australia has not done the right thing in terms of protecting our national interests and our national security,” Payne told reporters on May 13.

“Overall, we will continue to seek a constructive relationship with China, but it has to be a relationship in which our sovereignty and our interests are respected, and in which no party is coerced or subjected to pressures that breach international rules.

This is the list of 14 grievances China has with Australia. From banning Huawei from 5G, to calling for COVID inquiry and speaking out on Xinjiang and Hong Kong. @9NewsAUS https://t.co/329upQArRm pic.twitter.com/GPJZrtSzzt

Payne has taken a leading stance on tackling the CCP, she was the first world leader to call for independent investigation into the origins of COVID-19 in April 2020, and last year cancelled two Belt and Road Initiative agreements entered into by Victorian Premier Daniel Andrews with Beijing.

Andrews’ deal with Beijing was controversial given the Belt and Road has been accused of being a trojan horse for Beijing’s infiltration efforts.

Meanwhile, opposition foreign spokesperson Penny Wong echoed Payne’s sentiments stating that the approach to China was a bipartisan one.

“To be very clear, an Albanese Labor government will not take a backward step when it comes to standing up for Australia’s interests in this relationship,” Wong said.

She said that if China wanted to fix its relationship with Australia they would need to “desist from the coercive economic positions that they put in place in relation to Australia.”

The Labor Party’s foreign spokesperson also noted that despite the Australian government remaining open to dialogue, the Chinese regime has not taken up that invitation.

“China isn’t going anywhere, and neither is China changing some of the positions you articulated,” she said.

Wong also indicated that she would like to see more capability in the Department of Foreign Affairs and Trade and a whole government approach to the evolving strategic situation in the Indo-Pacific.

“It isn’t business as usual, is it?” Wong said. ‘We face very different circumstances to at any time really since the end of World War Two, and that the proposition that the world is changing and our region is being reshaped has to be our laser-like focus across government, and we have to ensure we have the capacity and leadership to respond and deal with it.”

The statements from the foreign ministers came as Australia’s Defence Minister Peter Dutton revealed to the country that a People’s Liberation Army—Navy spy ship was currently in the country’s territorial waters off the coast of Western Australia, and making its way north along the coastline.

“We haven’t seen a ship come this far south and it is tracking up towards Darwin at the moment,” Dutton said, who also called it an “aggressive act” on the part of the Chinese navy.

The Defence Department has identified the vessel as a Dongdiao-class Auxiliary Intelligence ship called Haiwangxing. Australia has often publicised the activities of Chinese naval vessels in the region as a way of exposing and creating pressure on Beijing.

“Defence is actively monitoring the current activities of the Chinese Intelligence Collection Vessel off the north-west coast of Western Australia with a combination of air and maritime capabilities,” according to a statement on May 13.