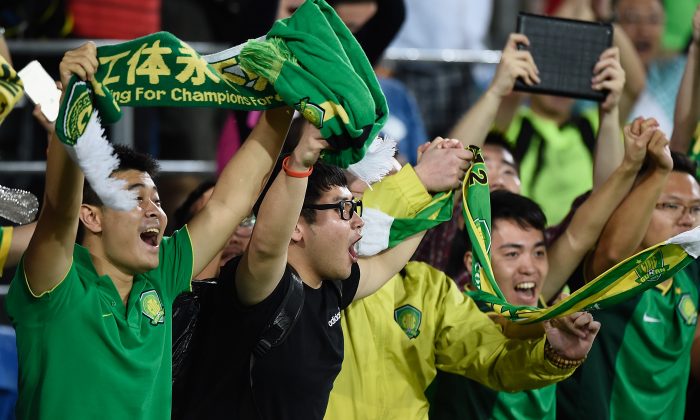 For the May 23 soccer game between the Beijing Guoan and the Jiangsu Guoxin-Sainty Football Clubs, over 1,000 Beijing fans traveled to Nanjing for the event.

They were accompanied by staff from the Beijing branch of the Commission for Cultural and Ethical Progress and league officials, who helped fans purchase tickets and enter the stadium in a civilized fashion, state-run media reported.

Green plastic bags for “civilized waste disposal,” designed by the Commission, were passed out to visitors at the Nanjing away-game venue. Printed on the bags were “Keep Your Mouth Clean While Watching the Game” and “Make Sure the Place Is Clean Before Leaving the Game.”

For Some Chinese Tourists, Bad Behavior Begins at Home

“Thanks to both the league officials in Beijing and the Beijing’s Office of the Commission for Cultural and Ethnical Progress, all the fans traveling to Nanjing to support the Beijing Guoan Football Club entered the stadium smoothly,” said Kang Ning, founder of Beijing’s Wild Green Cheerleading Squad.

Guiding fans to behave in a “civilized manner” at both home and away games is one of the major tasks of the Beijing’s Office of the Commission for Cultural and Ethnical Progress.

“Even though most of the fans in Beijing are young and they sometimes get very emotional, they are becoming more civilized in showing their love and loyalty to Beijing Guoan Football Club,” said Zhang Yue, organizer of the Imperial Guards Cheerleading Squad.

Videos created by the Commission demonstrating appropriate fan behavior are shown to the audience before the games begin. A new series of such videos was produced for this year.